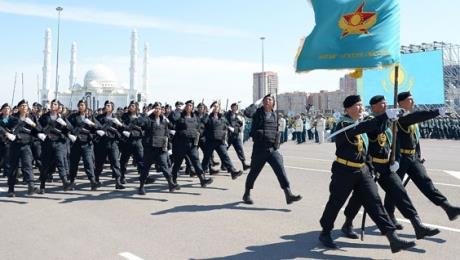 Nazarbayev issued a decree on Feb. 3 saying that from now on, Kazakhstan’s soldiers will march at a tempo of 95 to 105 steps per minute, with each step measuring from 60 to 70 centimetres. According to newly revised drill regulations, “the forward leg should be raised 10-15 centimetres from the ground and placed firmly on the entire sole, the toe held more freely, not extended.”

According to Eurasianet.org, this might seem to be an issue understood by few, but there are political nuances. Russia and many other post-Soviet militaries use the so-called “goose step,” which uses a tempo of 120 steps per minute, at a maximum of 80 centimetres and a straight leg.

“The hands are to make a movement next to the body from the shoulder: moving forward – bending them at the elbows, the hand to rise freely above the belt buckle on the width of the palm, and the palm to be at a distance from the body, and the arm to be at the hand level; moving backwards – freely without stress in the shoulder joint, at an angle 25-30 degrees (15-20 cm from the middle of the thigh). Fingers are to be half-bent, head is to be kept straight, looking ahead,” read the new drill regulations.

Some other post-Soviet countries like Georgia (in 2007), Estonia (2008), and Ukraine (in 2009) abandoned the goose step. This was done in order to distance themselves from their Soviet legacies.

The office of the Kazakh President didn’t offer any reason for the change.

During last year’s 70th anniversary Victory Parade in Moscow, it seemed that many ex-Soviet states seemed to use the same type of march.

The new wording changes the Statutes of Internal Garrison, Guard Services and Disciplinary Regulations. The decree comes into force upon expiry of ten calendar days after its first official publication.