ASTANA – More than 270 representatives of expo working groups from more than 100 countries took part in the second International Participants Meeting (IPM) in Astana Feb. 24–25, where Kazakhstan’s projects relating to the expo’s main theme were discussed and the Astana EXPO 2017 National Company presented an update on preparations for the event. Scores of bilateral and multilateral meetings between representatives of the expo and of participating countries were held as well. 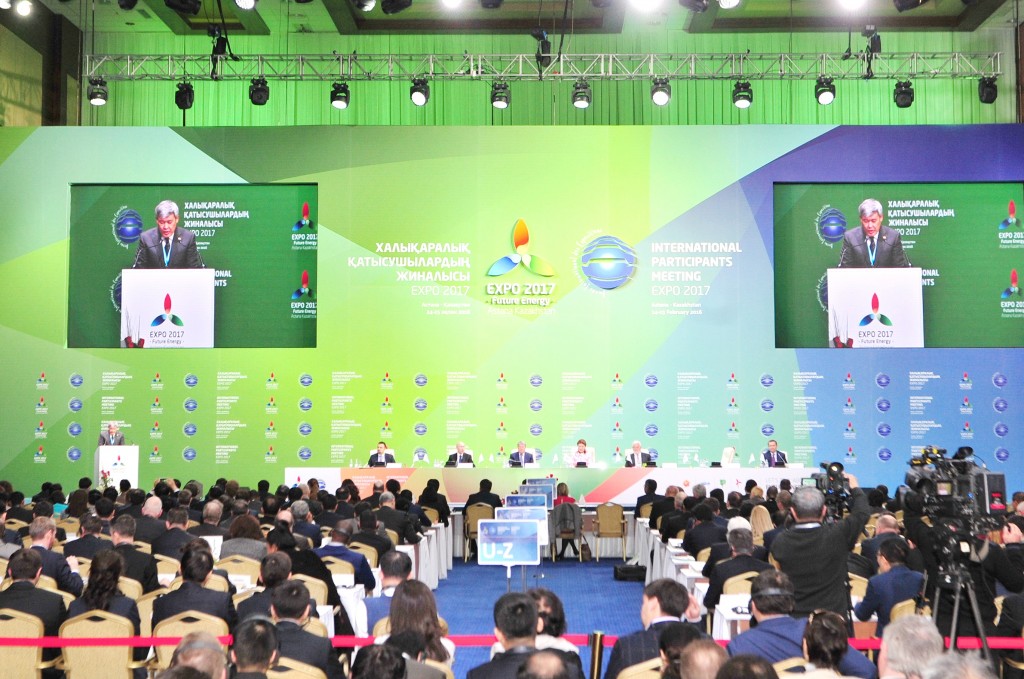 “EXPO 2017 will become a platform for the demonstration of humanity’s achievements in the field of green energy [and] of solutions to issues regarding the rational use of energy sources,” said Deputy Prime Minister of Kazakhstan Dariga Nazarbayeva during the opening session of the IPM.

Kazakhstan is already working on green energy solutions at home, Nazarbayeva said, noting that the country implemented 14 renewable energy projects with an aggregate capacity of  120 megawatts in 2015 and that electricity generated from renewable sources last year reached around 700 million kilowatt hours. She also mentioned Kazakh President Nursultan Nazarbayev’s initiative on Global Energy and Ecology Strategy and the Green Bridge Partnership Programme, both of which received support at the UN conference on sustainable development RIO+20 in 2012. 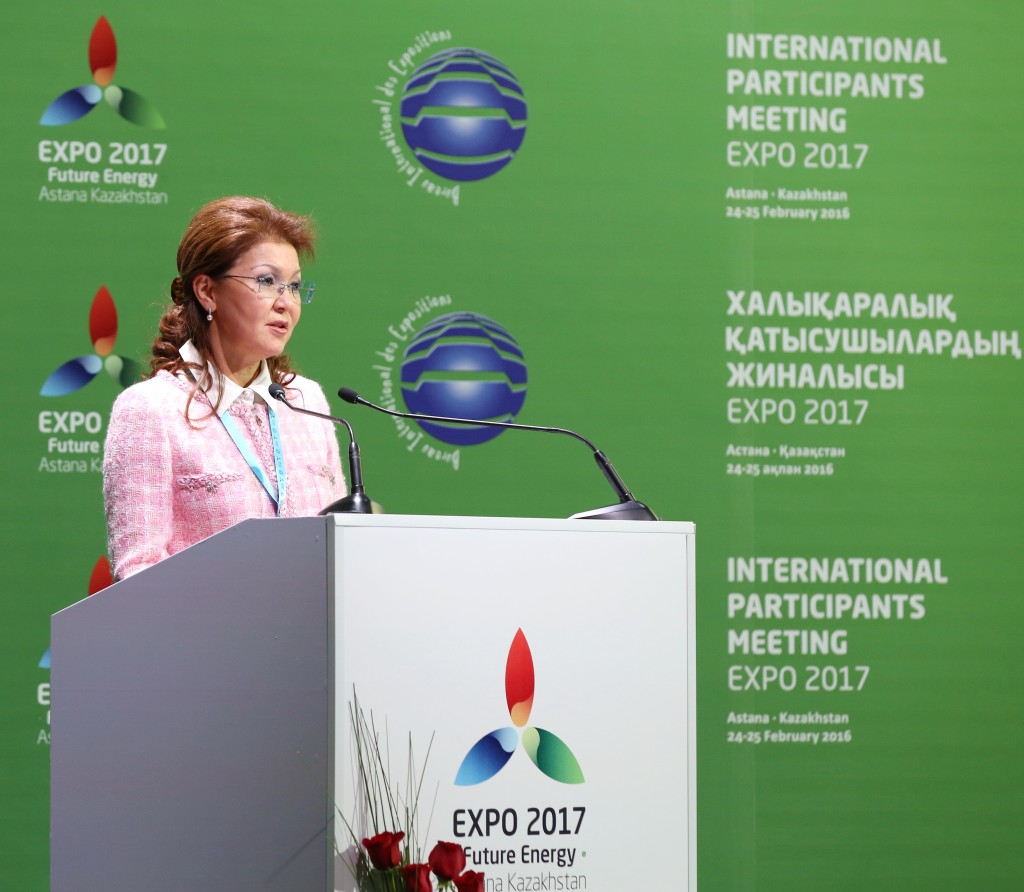 “We have approved the concept of Kazakhstan’s transition to a green economy and the resulting plan of action up to 2020. A Council on Green Economy has been established under the President of the country. EXPO 2017 is a logical continuation of our efforts in this field,” she said. The deputy prime minster noted that work on attracting international participants to the event is gaining momentum.

Nazarbayeva stressed that cooperating with the International Exhibitions Bureau (BIE) is very important for Kazakhstan, including the country’s involvement in EXPO 2015 in Milan. Kazakhstan’s pavilion there was visited by more than a million guests, she said, and the country earned positive feedback and took bronze among national pavilions for their presentation of the Milan expo’s theme. Now, preparations for Astana’s EXPO are being monitored constantly by the government and the President, she said.

BIE Secretary-General Vicente Loscertales said the IPM aims “to make Astana [EXPO] 2017 another unique and genuine form of international cooperation, where participants come together to support the national initiative of Kazakhstan to promote the transition towards green development.” 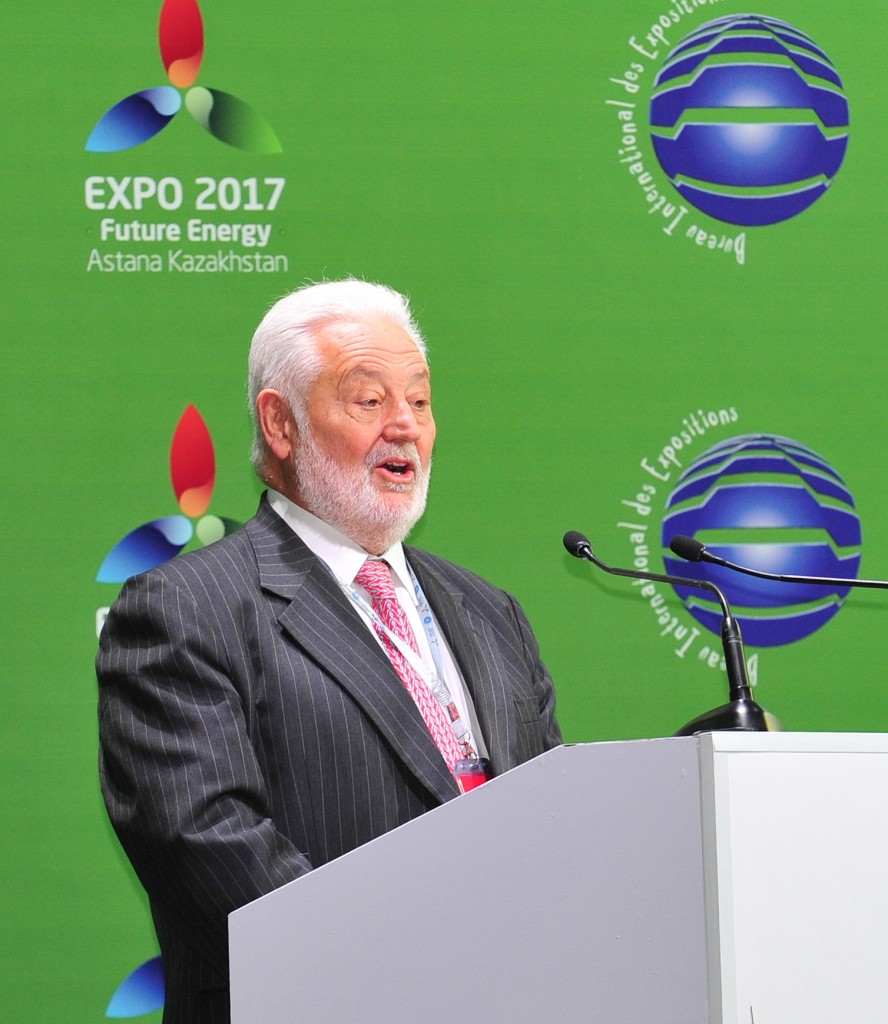 “The significance of the theme – Future Energy – makes this specialised expo a very large one in terms of ideas [and] display opportunities to make a real difference globally,” he added. “For participants, Astana will be a unique opportunity to display their ideas and vision.”

According to Loscertales, EXPO 2017 will offer Kazakhstan an opportunity to position itself as a country with a sustained commitment to greening its economy and promoting renewable energy sources and green technologies.

Chairman of the Astana EXPO 2017 National Company Akhmetzhan Yessimov and the company’s team presented updated information on the preparation for the exhibition and answered questions on issues ranging from changing pavilion selections to the royalties that countries must pay from sales made in their pavilions. Experts from the national company presented the architecture and construction plans of the expo site; updates on operational activities; content plans; as well as information on the Future Energy Forum, commercialisation, corporate participation and more.

Yessimov also noted that all schedules have been approved by the BIE and all work is being carried out according to the recognition dossier. The agreement between BIE and Kazakhstan has been signed and stipulates preferences and privileges for participants, including tax exemptions, simplified customs procedures, insurance and other benefits, he said. “Kazakhstan has expanded the privileges list in comparison with previous exhibitions,” Yessimov pointed out.

Kazakhstan is the first country in the Commonwealth of Independent States (CIS) and Central Asia to host an international exposition on this scale, Yessimov added.  “EXPO 2017 has become our priority and its success will definitely contribute to the country’s further sustainable development. Having large reserves of traditional energy resources, Kazakhstan has been consistently taking measures to implement its transition strategy to a green economic model.” 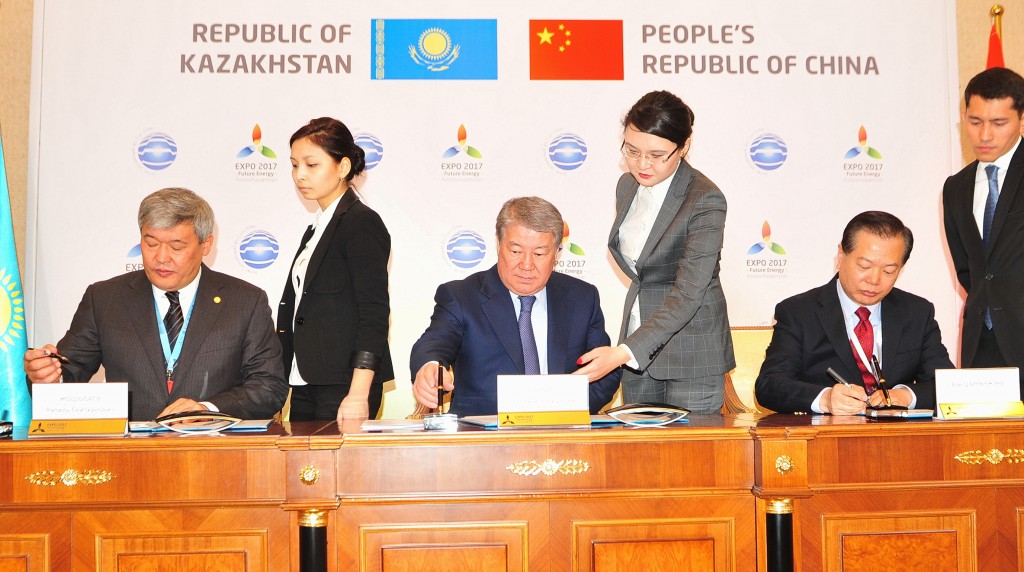 The signing ceremony of China’s participation agreement in EXPO 2017 took place in Astana on Feb. 24.

More than 100 countries are expected to participate in the exhibition, according to Yessimov. Today, 75 countries and 14 international organisations have officially confirmed their participation in the event, and 27 participation agreements have been signed. Thirteen more were to be signed Feb. 25.

Yessimov reported that the construction of international pavilions is underway and will be completed by this November. “At that time we will be ready to hand over the spaces to the international participants,” he said.

Head of the Business and Industry Department of Astana Malika Bekturova discussed preparations within the city of Astana, as it is expected that around 2.3 million visitors will attend EXPO 2017 in Astana, of which 85 percent will be domestic tourists from different regions of the country.

By the end of the third quarter of 2016, all roads leading to the expo site will be completed, she said, as will all heating systems and power lines. Astana’s airport will expanded to accommodate the expected visitors and a new railway terminal is planned. The city has rolled out 350 new buses and an additional 600 hybrid buses will be put into operation to serve tourists and participants.

Bekturova also said that the city is planning events for during the expo year, with 3,517 different events planned for outside the expo site and 3,296 to be held inside the expo site. The events include conferences, fairs, concerts and other activities.

“Together with the Ministry of Culture and Sports, we will fill all the venues, all the concert halls and theatres of Astana, and we will bring world-renowned ballets, operas and concerts by internationally famous pop and classical music singers,” she said.

Bekturova also discussed accommodations for expo guests and the importance of the event’s facilities being usable after the expo has ended, including as part of the Astana International Financial Centre (AIFC), which Nazarbayev decided should be housed within EXPO 2017 infrastructure.

The goal of the AIFC is to create a major international financial services centre in Kazakhstan, based on the successful experience of leading global financial centres in London, Hong Kong, Dubai and Singapore.