ASTANA – Twenty bids have been won by Kazakhstan for the Youth Olympic Games in Norway in nine events. 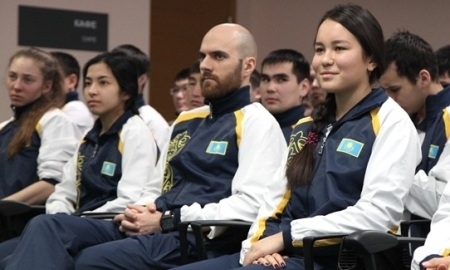 The former Winter Olympics city of Lillehammer hosts 70 nations during the Games Feb. 12-21. Youth from 15 to 18 years old battle for 70 medals in 16 events.

“Your participation in these Games is very important for us,” Minister of Culture and Sports Arystanbek Mukhamediuly said to the youth during the see-off ceremony. “You are the future of Kazakhstan. We should proudly say that you are already remarkable individuals in winter sports. We are confident that in the future you will be carrying the Kazakh flag on the world sports arena.”

The Kazakh delegation includes 20 athletes from eight regions in nine events and 11 coaches.

Short-trek skater Yerkebulan Shamukhanov, participant of Dаnabiа 1, the Austrian Open and Styrian Open 2015, competitions held under the auspices of the International Skating Union (ISU), was chosen to be the flag-carrier.

During the previous Youth Olympic Games in 2012 in Innsbruck, Austria, Kazakhstan took part in 10 events. Back then the national team finished the competition in the 23rd place and won one silver and two bronze medals.