By Kamila Zhumabayeva in Culture on 26 February 2016

ASTANA – A quartet is often considered to perform elitist music for the intelligentsia and casual listeners might not be attracted. The audience that desires chamber music or a performance of Wolfgang Amadeus Mozart, Ludwig van Beethoven or Soviet composer Dmitri Shostakovich, however, will come to a concert by Gaziza Zhubanova State String Quartet, or simply the Kazakh Quartet. 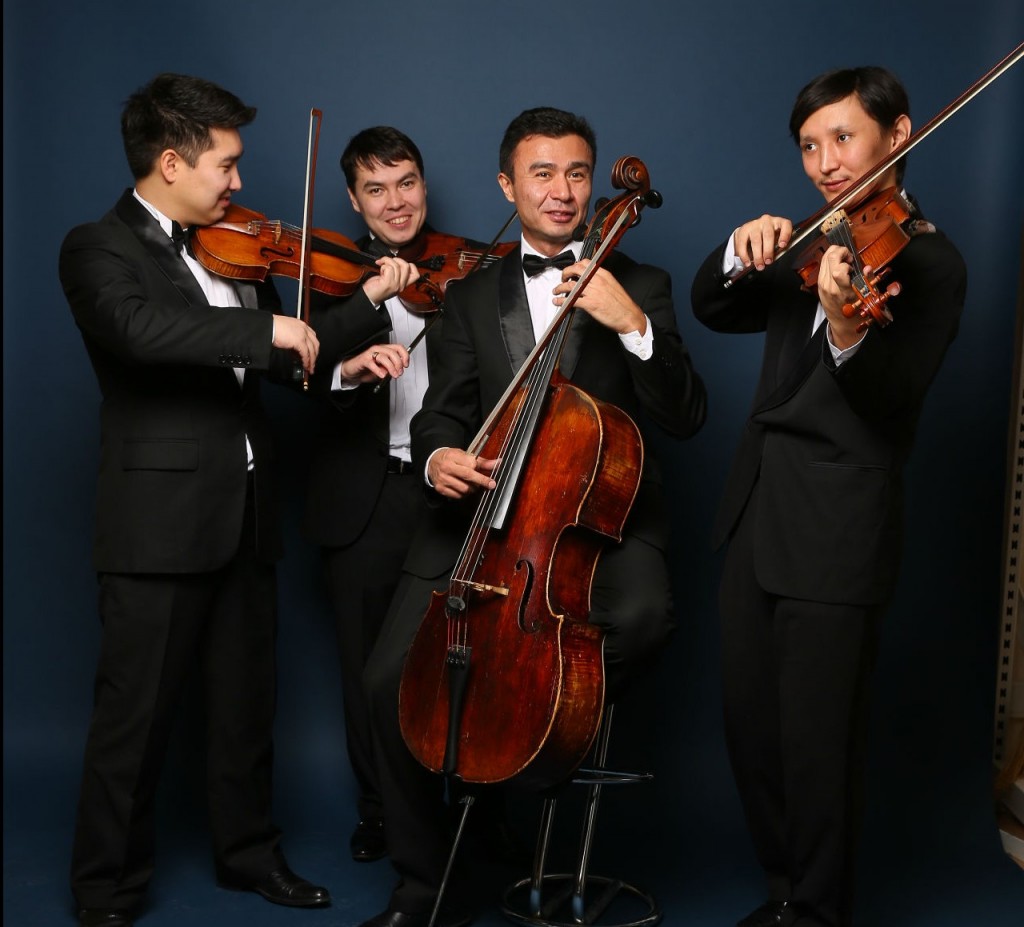 “We play quartet genre of chamber music. This genre is very important for educating youth, as this type of music humanises, makes people kinder, does not have boundaries or religious divisions and is universal for everyone,” said Kazakhstan’s Honoured Worker, Kazakh Quartet artistic director and cellist Yernar Myntayev in an interview with The Astana Times. “People who are interested in classical music can listen to this genre everywhere around the world, and classical music is in demand everywhere.”

Starting at Almaty’s Kurmangazy Conservatory during the early nineties, the quartet studied at Escuela Superior de Música Reina Sofía in Madrid, Spain and received their Master’s degrees in musical performance and chamber music from the Music Academy in Basel, Switzerland in 2012 through the Bolashak International Scholarship.

In addition to winning contests such as the Shostakovich International String Quartet Competition in Moscow, Osaka International Chamber Music Competition, Rovere d’Oro in San Bartolomeo, Italy and Bellini String Competition, the quartet was presented with a diploma for “best ensemble” from the queen of Spain.

“As luck would have it, a contest is often always a lottery… Apart from having to get ready at a very high level, there is a bit of such luck,” said Myntayev.

The quartet also participated in ensemble workshops with the Alban Berg, Amadeus, Bartok, Hagen, Mosaic, Smetana and Yanagek quartets. Their most recent tour was in the United States.

“We were pleasantly surprised and performed with joy there,” said Myntayev. “I remember the first concert when we were playing Joseph Haydn’s quartet and right after the final chord, the audience stood up, began to applaud and salute. It was like that in all our concerts. Audiences were emotional and openly thankful.”

Italian and Spanish audiences are very warm while those in Germany and Switzerland are more emotionally reserved, he added, but everyone has positive feelings when they listen to the music of great composers played at a high level.

“It is nice to be in Europe and America, but as trivial as it sounds, we like to be in Kazakhstan and our homes more,” noted the cellist. “We can travel to the West on our concert tours… We used to live in Italy and Switzerland, for example, but somehow we realised it is not for us. But who knows, this is life!”

The quartet is currently living and playing concerts in Kazakhstan.

“For instance a season ticket, a cycle of Beethoven’s 16 quartets for this year’s concert season, is being played by the quartet in Almaty, which is a big cultural event for Kazakhstan,” said Myntayev.

In addition to representing Kazakh culture and the classic genre, the quartet aims to promote the music of native composers.

“This is only the beginning,” he said, assuring the ensemble also plans to participate in similar events and play other composers in the future.

The quartet is coordinating a tour this fall of six U.S. states, playing a final concert in Carnegie Hall in New York.

“Wherever you are competitive, have a major artistic life and concert activity, there is certainly no time for being bored and languished. It is always interesting,” added the cellist.

The Kazakh Quartet has the national status of a professional string quartet able to perform and present Kazakhstan’s culture at a high level on world’s most-respected stages.

“That is what admirers of classic music know us for, not only in Kazakhstan but also throughout the world,” said Myntayev.