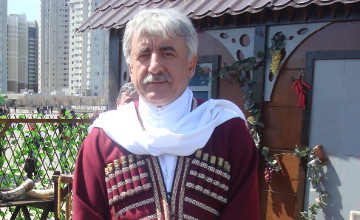 ASTANA – The fates and paths of different ethnic groups living in Kazakhstan crisscrossed the steppes for numerous reasons – most were deported and repressed under the Stalinist regime. Georgians, however, made the country their home by choice rather than by necessity.

“There have never been mass migrations of Georgians, as opposed to other ethnic groups,” said Astana’s “Kolkheti” Georgian Ethno-Cultural Association Chairman Yelgudja Apkhazava in an exclusive interview for this story.

“Georgians migrated to Kazakhstan individually when they wanted to do so. Perhaps the Kazakh hospitality, one of the traits that Georgians are also known for, influenced their moving decisions. Currently, there are about 200 people in Astana, no more,” he added.

The association, with 16 members, has similar branches in Aktau, Almaty, Atyrau, Karaganda and Taraz, according to the Assembly of People of Kazakhstan (APK). The local group keeps in touch with the Georgian Embassy in the capital, the chairman stressed, which provides literature in the native language and national costumes for concerts for Sunday school children under the auspices of the State Ministry on Diaspora Issues of Georgia.

Apkhazava, who moved to the city in 1983 and decided to stay and study, established the association in 2007 to become an active part of Kazakhstan’s multi-ethnic society. The country’s upcoming Day of Gratitude is one of the activities in which the association is engaged.

“We are currently preparing for the new celebration on March 1, the Day of Gratitude, where all ethno-cultural associations will present their cultural heritage. We will cook our national dishes, wear costumes and portray Sakhi, little Georgian national houses which were constructed with the help of the Astana city administration. These houses will have Georgian drawings, souvenirs, handmade gifts and crafts inside.”

The chairman noted Kazakh business is widely represented in Georgia.

“There are many financial interactions between representatives of Kazakhstan’s business at the Batumi port, dealing mostly with grain and other general products. Recently a hotel was built in the resort town of Borjomi,” he said.

Apkhazava added he feels his deep roots in Kazakhstan prevailed in his identity as a citizen.

“My children were raised here; I am used to this country. Sometimes I go to visit my relatives in Georgia and after 10-15 days I am homesick. I want to go back to Kazakhstan,” he said.

Asked what draws him to return, he admitted “close friends.”

“I am treated well by people. I also work on the railroad and I feel like I was born here. I don’t feel as an alien but feel the attention of the people, their support, and I am happy to be living here. This is my favourite toast when we meet with friends – to this land, to our President Nursultan Nazarbayev, who manages despite the global tensions to keep peaceful skies over our heads. The small inconveniences we are facing today, they are temporary; everything will be fine soon. I am sure of it,” he said.