By Anuar Abdrakhmanov in Sports on 20 February 2016 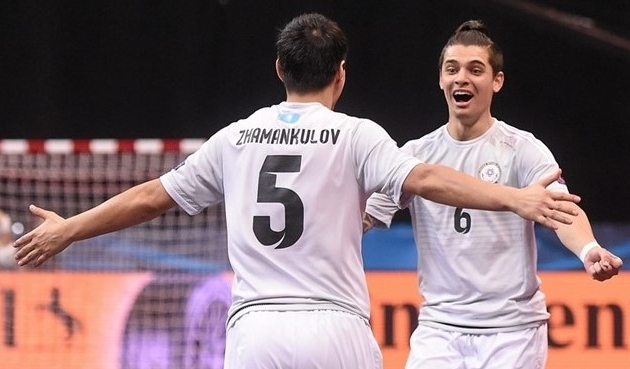 Kazakhstan’s team, led by coach Ricardo Camara Sobral, better known in futsal as Cacau, defeated their Serbian hosts 5:2 to take third place and enter the top 10 in the FIFA rankings.

Thanks to the success of the Almaty Kairat team in the UEFA Cup, Kazakh club futsal has become well known in Europe. Kairat, the country’s leading club, won twice in the UEFA Cup, with this being as many times Kazakhstan has played in the tournament finals, and won the Super Cup Futsal world in 2014.

Kazakhstan was overjoyed to climb so high in their first appearance in international competition. Forward Pavel Taku said “Am I happy with bronze in the European Championship? Previously, we could only dream to win the Tour!”

Kazakhstan began their run in a meeting with Russia – who would go on to compete in the final – and lost the bitter struggle, 1:2. They recovered, however, to defeat Croatia 4:2, earning themselves a place in the playoffs against winners of the last European Championship, Italy. Experts did not predict a victory for Kazakhstan, but the team surprised the world, beating Italy with a score of 5:2.

In the following semifinal game, Kazakhstan lost to the Spanish national team, 3:5. Spain, six-time European champions and two-time world champions, would go on to win Euro Futsal 2016, defeating Russia in the final match 7:3.

In the game against Spain, Kazakhstan showed some fighting spirit, but their rival’s experience and skill prevailed. Kazakhstan was also certainly hindered by the absence of two of their leaders: striker Chingiz Yessenamanov and goalkeeper Higuita, who play key roles in Cacau’s “fifth field” tactics, in which the goalkeeper also plays an attacking role.

Before the game with Kazakhstan, Serbian fans hung a huge banner saying, “For us, you are already winners,” and actively supported their team throughout the match. Kazakhstan played the game under constant psychological pressure from the crowds.

The first half was a crowd pleaser, with repeated attacks, great goalkeeping and no clear advantage. It was not until the last minute of the first half that Douglas Jr. scored, making it 1:0 for Kazakhstan. Then Serbian goalkeeper Miodrag Aksentijević could not hold the ball after a strong shot from the Kazakh side.

In the second half, the Kazakhs settled all questions about the winner of the match with goals by Serik Zhamankulov and Douglas Jr. Zhamankulov, indeed, was one of the best snipers of the tournament, with six goals scored. In the course of the Serbian match, he had several opportunities to excel, but hit the bar three times and had two shots saved by Aksentijević.

Higuita, who truly demonstrates the futsal adage that the goalkeeper is half the team, secured Kazakhstan’s advantage. Higuita was the author of one of the most beautiful goals of the championship: having saved the first strike at his gate, he immediately sent the ball into Serbia’s empty goal. A few minutes later, Douglas Jr. scored a fifth goal for Kazakhstan. By the end of the match, the Serbians had scored twice but that was not enough, and Kazakhstan took the match, 5:2 – and the bronze.

“I do not have the strength nor the emotions to celebrate. We’re just happy for our team! Thanks to all our fans for your support! It spurs us to achieve our goals! Once again I congratulate all of us!” Zhamankulov told The Astana Times.

Without a doubt, much of the credit for the victory must go to Cacau. With the arrival of the 42-year-old Brazilian professional as head coach, the quality of Kazakhstan’s game has improved and become much more spectacular.

“I have been working in Kazakhstan for nine years, five as a player, four as a coach. I won two big tournaments with Kairat, but today is a special day in my career. Perhaps someone had doubts about our game, but today once again Kazakhstan has shown their best football. I am proud of my players,” Cacau said of the historical victory.

“I would like to thank our close friends and relatives for supporting and rooting for us throughout the tournament. I think we properly represented Kazakhstan in the international arena, and now many know about us. We are happy to make history. One of my dreams has come true. Winning the bronze medal of the European Championship is a great honour. And my second dream is, of course, the World Cup. There will still be playoffs, and we will need to try very hard to make it in the World Cup,” said the captain of Kazakhstan’s national team Dinmuhambet Suleimenov.

In March, Kazakhstan will play Poland for the right to go to the FIFA Futsal World Cup, which will be held from Sept. 14 to Oct. 2 in Colombia.