By Kamila Zhumabayeva in Nation on 20 February 2016

ASTANA – Kazakh President Nursultan Nazarbayev instructed the government in collaboration with the 2017 World Winter Universiade organising committee and Almaty’s akimat (city administration) to take all measures to prepare for the Universiade during a meeting in Almaty on Feb. 16. 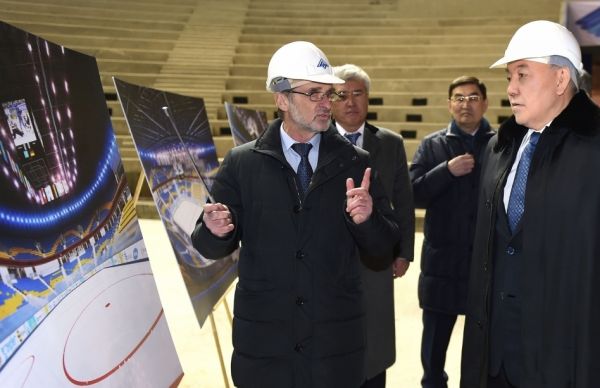 As the head of state noted, it is important to conduct the games at a high level for Kazakhstan and it is designed to bring a big economic impact.

“Conducting the Universiade will give a new impulse to developing the city, improving its architectural appearance, raising the level of service in hotels, restaurants, public transport and sports objects. This all will stimulate small and medium-sized businesses, increase the volume of services and create new jobs,” the President said at the meeting.

A number of projects are still not ready, according to him.

“The Medeu ice rink, Shymbulak ski resort and Baluan Sholak sports and culture palace raise serious concerns. Moreover, it is now necessary to think how to use those facilities after conducting the games. The strain on the budget should be minimal while the sports facilities should be available to the public,” Nazarbayev stressed.

The President also touched upon the crime situation by drawing attention to the need to raise the safety of citizens. Particularly prior to the anticipated Universiade and the arriving of many athletes, fans and tourists, he instructed measures on improving law enforcement in the city by continuing the work on setting video cameras and street lighting.

The head of stated noted that implementing the tasks set to increasing the efficiency of the domestic economy in many ways depends on the regions, among which Almaty plays an important role.

“The city has formed as a large economic centre, it is a donor of the national budget and provides one-fifth of the gross domestic product as of today. Almaty is also a leading educational centre; almost 40 percent of [the country’s] higher educational institutions are here. There is a big scientific potential that includes 86 scientific research institutes and 11,000 research workers who should make a significant contribution to developing the innovation knowledge and intensive sectors of economy,” Nazarbayev said. “Seventeen national cultural and arts organisations operate in the city. The chain of modern international level sports facilities was established. It attracts many tourists from other regions and countries apart from Almaty residents.”

The President reminded about measures of additional support of the economy aimed at increasing the efficiency of monetary policy and maintaining financial stability in the country, which was announced at a recent government’s enlarged meeting.

“According to experts, the crisis in which the world economy is today will be lingering. Additional measures in the amount of 2 trillion tenge (US$5.7 billion) that we take will allow ensuring the active occupation of 60,000 people, create 18,000 new jobs and implement thousands of infrastructure projects. An efficient resolution of tasks set will mainly depend on regions and the professionalism of the government apparatus,” the head of state noted.

Nazarbayev emphasised the need of maximal rational use of financial resources considering their limitations.

“The main task that I set to the city is attracting investment and creating new jobs. The work assessment of the akim (mayor) and his apparatus will depend on this. Actively introducing public private partnerships is necessary. The akim reported that this type of work has already started,” said the President.

Moreover, the head of state instructed the akimat to work out attracting investment for implementing big projects in the city.

“Industrial development programme was developed on my instruction six years ago. During this time, 900 new facilities were introduced, about 100,000 jobs were created. With that, a total of 27 projects with an overall investment volume of 285 billion tenge (US$800 million) was implemented from the beginning of conducting this programme in Almaty… And only 42 billion tenge (US$117.9 million) are private investments. It is not enough for Almaty with its potential,” Nazarbayev noted.

The President drew attention on the need to increase the representation of innovative, design and service enterprises in Almaty’s business environment.

“A modern city needs an innovative economy… As of today, 150 companies are involved, as well as 42 higher education institutions, including six national and one third of all students are in Almaty,” said the head of state.

In this regard, Nazarbayev set a task on creating conditions for young scientists and students to implement their ideas and introduce new developments by instructing Minister of Education and Science Yerlan Sagadiyev to take the fulfilment of this instruction under special control. Moreover, the President urged local executive bodies to be involved in supporting small and medium-sized businesses.

“This sector forms 85 percent of Almaty’s gross regional product. In general, 600 billion tenge (US$1.6 billion) is allocated across the country to preserve production volumes, support of small- and medium-sized businesses. Procedures of legalisation of capital are considerably simplified,” the head of state stressed.

“For housing construction, 47 billion tenge (US$131.9 million) will be allocated; more than 3,000 apartments will be built as part of the Nurly Zhol programme. The cost of one square metre for accommodation for Almaty will not exceed 200,000 tenge (about US$561.4),” the President stated.

Kazakh Minister of Investment and Development Asset Issekeshev and Minister of Culture and Sports Arystanbek Mukhamediuly and Akim (Mayor) of Almaty Bauyrzhan Baibek also spoke during the meeting.