ASTANA – Observers from the Organisation for Security and Co-operation in Europe’s Office for Democratic Institutions and Human Rights (OSCE/ODIHR) will monitor Kazakhstan’s March 20 early parliamentary elections in an objective way and focus on the process, not intending to pass a verdict on the validity of the vote, Ambassador Boris Frlec of Slovenia, the head of the mission said. 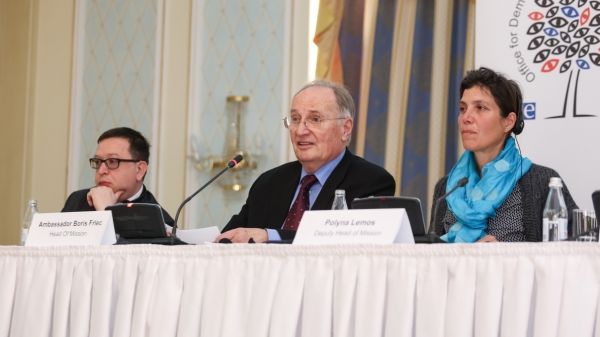 “It is important to understand that our main task is to observe the election process, not to interfere. We are not election police or supervisors, we are not interested in the outcome of the elections,” said Frlec during a Feb. 17 press conference here to announce the official start of the observation mission. He added that the mission is interested in the process itself being transparent and fair.

“We are here by the invitation of the Ministry of Foreign Affairs. These are the ninth elections OSCE/ODIHR is observing in Kazakhstan since 1999. We had a joint, very constructive cooperation with all the electoral stakeholders in the past and we look forward to make so in the coming weeks,” Frlec said.

He noted the mission so far consists of 39 experts, 11 of whom form a core team based in the capital and 28 long-term observers who will be deployed throughout the country in teams of two to start their work in less than a week on Feb. 23. In addition, 400 short-term observers are expected from OSCE participating states to arrive several days before Election Day.

“We are grateful that we have received the invitation in such a timely manner. This allows us to observe the entire process of the elections according to our standards. Also, we would like to stress we have arrived here without preconceived ideas or fixed agendas,” said Frlec.

He also noted the observers apply the same standards and methodology to all OSCE participating states.

One of the main duties of the mission is to assess upcoming elections for compliance with OSCE commitments and other international obligations and standards for democratic elections, as well as with national legislation, Frlec said.

The experts will closely monitor candidate and voter registration and campaign activities and the work of the election administration and relevant government bodies. On election day, they will observe polling station openings, voting, ballot counting and tabulation of results. They will also oversee legislation and its implementation, as well the resolution of election-related disputes. As part of the observation, the mission will also monitor media coverage of the campaign.

The mission will meet with state authorities, political parties and candidates and with representatives from civil society, the media and the international community. “During the course of the observation, we will meet with every stakeholder in the election process starting with the political parties. Parties are always eager to talk to us and explain their positions at the election. These discussions are always interesting,” said the head of the mission during the conference.

The mission will issue one interim report, according to its press release, several days prior to the election. A statement of preliminary findings and conclusions will be released at a March 21 press conference. ODIHR will issue a final report on the entire electoral process eight weeks after the end of the observation mission.

“Recommendations that are made by OSCE are not political; they are not obligatory. It is up to the country whether to implement them or not; there might be reasons why not. Our task is to find out how many were implemented and to see whether there are more changes that should be implemented to the election process. It is not the task of ODIHR to recognise or not to recognise the elections in the country. Final reports of observation missions are discussed at the OCSE Council in Vienna. The country that was observed has every possibility to answer any kind of questions,” said Frlec.

The OSCE/ODIHR election observation mission and the OSCE programme office in the capital operate separately and independently under their own mandates.

After the official part of the press conference Frlec and his colleagues were asked several questions by the representatives of local media.

The head of the mission stressed once more that the mission does not have any preconceived ideas about the country. “Every expert in the mission has a long lasting experience. I do not see any reason for any concerns there will be any difference this time,” he added.

“We do not compare elections in different countries. We assess the election process on an absolute basis, not trying to say ‘this was better, this was worse.’ We were observing many elections in countries of Central Asia and never had particular difficulties,” replied the head of the mission to the question whether results of observation missions in different countries are being compared.

“It is very interesting to know in what kind of political context the election process will take place. We are only comparing the implementation of the principles recorded in the Copenhagen Document with the actual state of the process in the country,” added Frlec.

Earlier on that day, he met with Kazakh Minister of Foreign Affairs Erlan Idrissov and head of the Central Election Commission Kuandyk Turgankulov. According to the Kazakh foreign ministry, during the meeting Idrissov stressed that the country was committed to holding competitive, transparent and fair elections.