By Malika Orazgaliyeva in Nation on 19 February 2016

ASTANA – Kazakhstan is committed to holding competitive, transparent and fair elections, Foreign Minister Erlan Idrissov said at a Feb. 17 meeting with the head of the observation mission for early parliamentary elections from the Organisation for Security and Cooperation in Europe’s Office for Democratic Institutions and Human Rights (ODIHR). 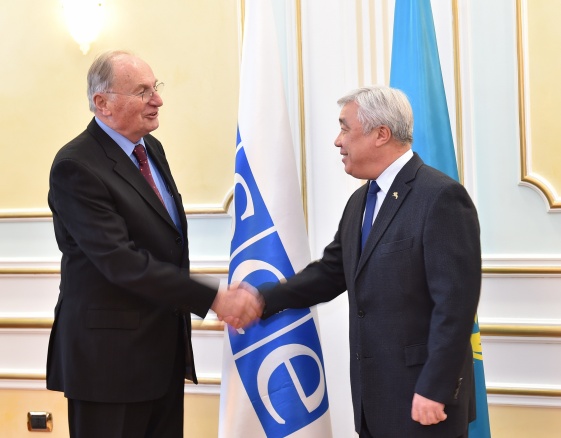 “I am convinced that the upcoming parliamentary elections will be another step towards strengthening the independence of our country,” Idrissov told Ambassador Boris Frlec who began his mission on the same day, according to the foreign ministry. “We attach particular importance to how the upcoming parliamentary elections take place and we intend to ensure 100 percent public confidence through the organisation of the elections in accordance with the highest democratic standards. Our Constitution and electoral laws clearly define the requirements for candidates and the election rules.”

Idrissov also said invitations to observe the elections were sent to 11 international organisations and representatives of central election commissions from 19 countries.

Frlec thanked Kazakhstan for the timely invitation to observe the elections and creation of favourable conditions for the mission’s work. The OSCE/ODIHR mission officially started monitoring the elections to the Mazhilis on Feb. 17.

The sides discussed the country, regional and the global contexts of the elections scheduled for March 20.
“Today, through the hard work of the Parliament and the Government to establish a legislative framework for the implementation of the Plan of the Nation ‘100 Concrete Steps,’ Kazakhstan sets itself on a new path of the five institutional reforms initiated last year by President Nursultan Nazarbayev,” Idrissov noted. “Five reforms provide for the establishment of a modern state apparatus, enhancement of the rule of law, economic diversification and business development, strengthening of the Kazakhstan identity and unity, creation of a transparent and accountable government and society.”

He noted these government actions coupled with the implementation of projects under the Nurly Zhol new economic policy and an additional investment of public funds into the country’s economy recently announced by the head of state were designed to provide the conditions for sustained and sustainable development in the future. In this regard, the elections to the Mazhilis of the Parliament and the corresponding renewal of the mandate of the parliament and the government at this stage are very timely steps.

At the end of the meeting, Idrissov and Frlec confirmed their readiness for close cooperation in the coming period.