By Aiman Turebekova in International on 18 January 2016

ASTANA – The Kazakhstan Institute for Strategic Studies under the President of Kazakhstan (KazISS) presented Jan. 14 an overview of the ten most important events in 2016 which are crucial for political and economic development, stability and security in Central Asia. 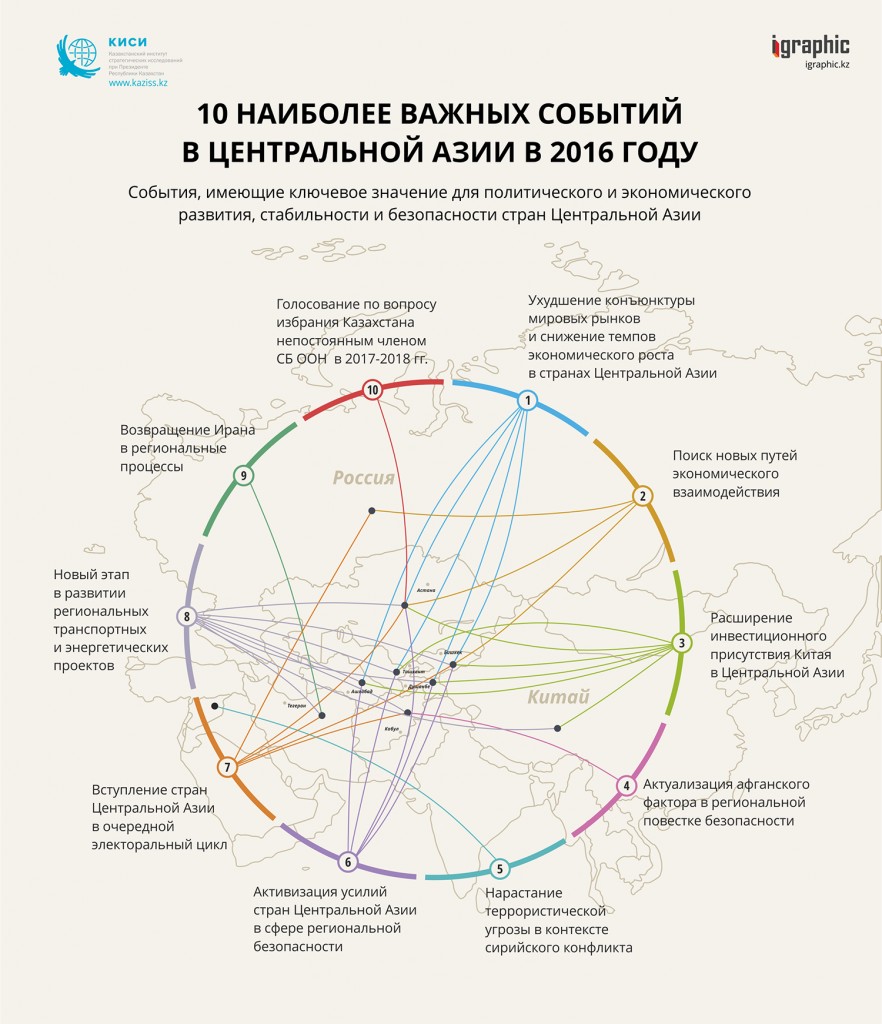 Experts noted countries of the region will celebrate their 25th anniversary of independence this year and will be summing up the results of its development. In 1991, with the sudden collapse of the Soviet Union, Kazakhstan, Kyrgyzstan, Tajikistan, Turkmenistan, and Uzbekistan became independent, developing at contrasting rates and in different directions with diverse political and economic regimes.

According to the World Bank’s 2015 report, “almost all economies in the region have been negatively affected by the spillovers from the recession in Russia and Ukraine, weakening confidence related to the on-going geopolitical tensions and growth slowdown in oil-exporting Azerbaijan and Kazakhstan to various degrees.”

Based on the experience of various analytical think tanks, KazISS offered its overview of the most important developments in Central Asia in 2016. Here’s that list as presented on KazISS website.

1. The deterioration of conditions in world markets and the slowdown in economic growth in Central Asian countries

In 2016, the global economic backdrop will likely be negative. The growth of most economic centres will weaken and slow down. The effects of adverse factors will be manifested, and will include, among others, the monetary policy of the U.S. Federal Reserve, slowdown in China, continued pressure on the economies of the European Union (EU) and Russia because of the mutual sanctions, decline in the commodity markets causing problems in the commodity economy, and the non-economic factors (military conflicts, migration problems and environmental and climate change). Commodity markets will remain under pressure in the first half of the year. The tightening of the monetary policy of the Fed, excess of supply over demand, OPEC’s price pressure on unconventional oil production, prospects of the output of American oil to the world market and possibility of increasing Iranian exports will negatively impact the oil market. Low prices in world commodity markets continue to have unfavourable consequences on Central Asian economies, whose growth will be limited and will remain at relatively low levels.

In 2016, the Eurasian Economic Union (EAEU) will go through the first phase of its activities. By mid-year, it will be possible to draw some preliminary conclusions on its functioning on the basis of data from national statistical services. In this regard, the priorities of a further integration structure and overall prospects for economic cooperation will be defined.This year will also be a period of active expansion of international partnership for the EAEU. In particular, the possibility of establishing free trade areas with a number of countries will be explored, as will be various forms of cooperation with international organisations and other integration associations. Kazakhstan has taken over the chairmanship of the EAEU in 2016.

China continues to be the main trading partner of the region. There is also a growing trend of the expansion of investment presence of China’s transport and logistics projects and processing industry aimed at modernising Central Asian economies. Expectations are that the search for specific mechanisms for interfacing the initiatives of the Silk Road Economic Belt and the EAEU will be activated in 2016. In March during the annual session of the National People’s Congress, the 13th five-year plan will be released, in which the Silk Road Economic Belt project and the concept of “going beyond” will take centre stage. Plans to transfer businesses outside of China, including the countries of Central Asia, will be implemented. The planned G20 Summit, which will take place in September 2016 in Hangzhou, will testify to China’s new role.

4. Actualisation of the Afghan factor in the regional security agenda

In 2016, the situation in Afghanistan will continue to be the focus of attention of the international community. The negative trend of recent years, accompanied by outbreaks of violence and an increase in terrorist attacks, is likely to persist. Against the background of a difficult political and military situation, consolidation of power and stable operation of the government are very important. Increased terrorist and military activities in the country will encourage key external players for more effective actions aimed at resolving the situation in the country.

5. The increase in the terrorist threat in the context of the Syrian conflict

Because of the intensification of the conflict in Syria and its neighbours, terrorist risks and threats are rising. The continued involvement of people from Central Asian countries with ISIL and other extremist groups will increase security risks. In a nutshell, the formation of mechanisms to counter the terrorist threat is one of the main challenges of the region. Tensions between global and regional players involved in the resolution of the Syrian conflict will complicate the international political situation that could become a new challenge for Central Asian countries.

6. Increased efforts of Central Asian countries in the field of regional security

This year has become crucial for the work of regional institutions in the security and cooperation fields. Important summits and meetings which will focus on topical issues of regional security, such as the summits of the Shanghai Cooperation Organisation (SCO) and Organisation of Islamic Cooperation (OIC) Council of Foreign Ministers in Tashkent, the Caspian Summit in Astana and the Cooperation Council of Turkic Speaking States summit in Kyrgyzstan, will be held in 2016. The regional dialogue platforms in the format of C5+1 with the United States, EU-Central Asia and Central Asia + Japan are also expected to intensify.

In 2016, major election campaigns are expected in certain Central Asian countries. In particular, a serious test for the government of Afghanistan will be the elections to Parliament and local councils shifted to 2016. The deterioration of the situation in Afghanistan does open the question of whether or not the election will be held this year. Equally important will be the election to the local Kenesh (councils) in Kyrgyzstan, especially in view of the alignment of political forces before the upcoming 2017 presidential election. Parliamentary elections in Kazakhstan should become a new stage in the political and social modernisation of the country. Elections with some importance for the formation of regional issues in Central Asia are elections for the national Parliament and Council of Experts of Iran in February, the State Duma of Russia in September and the US presidential election in November. 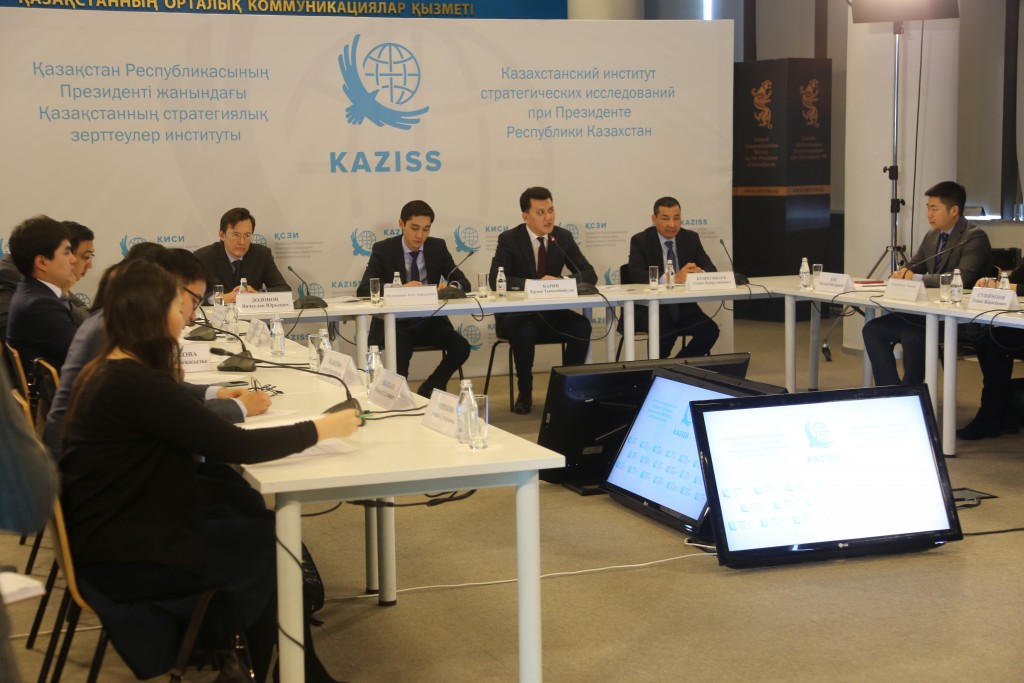 8. A new stage in the development of regional transport and energy projects

The practical implementation of energy and transport projects enhancing inter-regional economic cooperation is planned to begin in 2016. One of the highlights will be construction of the TAPI (Turkmenistan–Afghanistan–Pakistan–India) natural gas pipeline and the start of construction of the CASA-1000 transmission lines from Central to South Asia. The Angren-Pap railway in Uzbekistan, which will be an important link in the China–Central Asia–Europe international transit corridor, is expected to launch. There are also plans to expand the Aktau port to the north and complete a ferry complex at the Kuryk port, which will become an important component of the national and international transport and logistics system. Completion of the Kazakh part of the Western Europe–Western China transcontinental highway and implementation of the project to construct the Iran–Afghanistan railway, part of the Iran–Afghanistan–Tajikistan-–Kyrgyzstan transport route, are expected this year.

After the revocation of international sanctions, Iran will activate its economic and foreign policy. At the same time, Tehran plans to increase oil production in order to reach the level before the sanctions, which will increase competition among suppliers of energy resources and put additional pressure on oil quotations. Iran’s foreign policy and economic revitalisation in Central Asia and the Caspian region is anticipated, in particular, on issues of interaction with the EAEU and participation in the Silk Road Economic Belt project, which will open new opportunities in the trade and economy and transport and communication sectors. In addition, Tehran will seek to raise its status in the SCO. In turn, Iran’s activation will increase competition among regional powers, which will have an impact on Central Asia.

10. A decision on Kazakhstan’s bid for non-permanent membership of the UN Security Council for 2017-2018

An important event will be the vote on Kazakhstan’s bid for a non-permanent seat on the United Nations (UN) Security Council for 2017-2018. Against the background of the transformation of the international relations system and growing global challenges, becoming a non-permanent member of the UN Security Council would mean the strengthening not only of Kazakhstan’s international standing, but of the Central Asian region as a whole. This step would give Kazakhstan an opportunity to participate directly in shaping the global agenda in the security field and help move to prominence the most important issues of the Central Asian region at the international level.