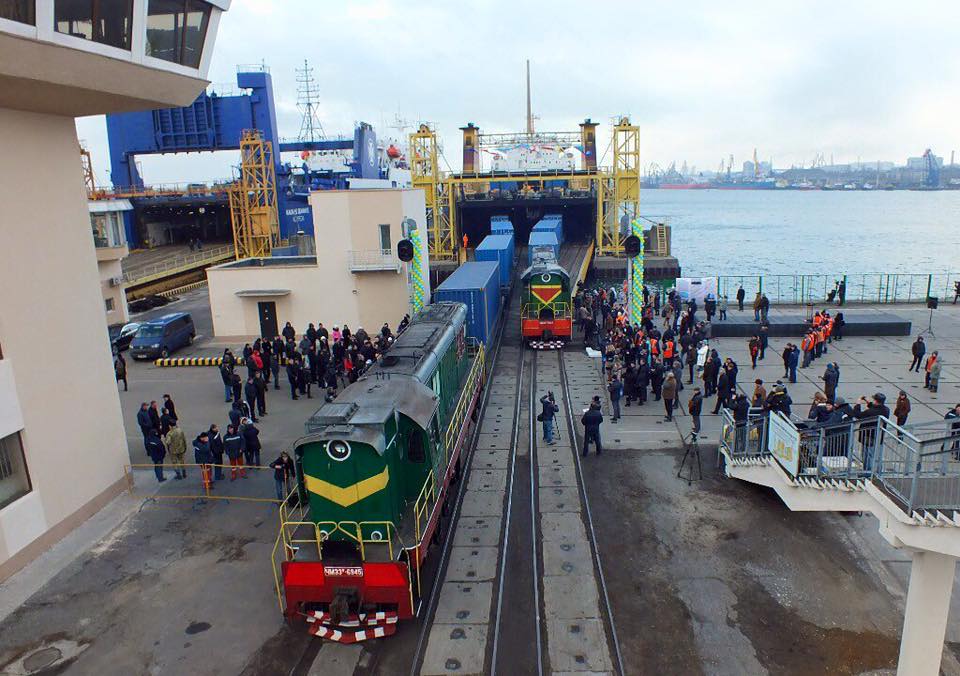 According to the source, “that route is a new direction of the Silk Road and at the same time it is an alternative, which will help to redirect traffic flows in an easterly direction bypassing Russian territory. It includes ferry crossings of the Black and Caspian seas (Illichivsk – Batumi and Alyat – Aktau port) and is set to become competitive in comparison to the traditional overland route.”

The trial run will test technologies, accelerated delivery times, tariff conditions and train operators. The demonstration run opened an alternative way of delivering goods from Ukraine to the countries of Central Asia. The trail container train has around 20 carriages.

The route of the container train includes rail and ferry legs. The railway follows Kiev – Zhmerynka – Odessa and Poti – Tbilisi – Baku routes. Ferries on the Black Sea go from Odessa to Poti and on the Caspian Sea from Baku to Aktau. The goods then travel from Aktau all over Kazakhstan. The transit of goods to China will be made via the Aktau – Astana – Dostyk route, to Kyrgyzstan via the Aktau port – Shu – Bishkek route and to Uzbekistan, Tajikistan and Turkmenistan via the Aktau – Beineu – Kungrad – Altynkul port.

The journey of a container train from Kiev to Aktau will take about nine days. The train will run three times a week starting in March. With the capability, goods from Central Asia and Kazakhstan will be delivered to Ukraine, Azerbaijan, Georgia, Latvia, Lithuania, Estonia, Poland and the countries of the European Union by container train named Friendship. The port of Aktau, which will now become busier, will play a great role as a transit point.