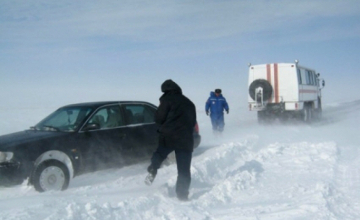 Rescue teams have saved more than 600 people trapped on Kazakh roadways because of heavy snowfall in early January, among them 454 people have been evacuated, reported the Emergency Committee of the Kazakh Ministry of Internal Affairs.

According to the official statement of the committee, as of Jan. 4, traffic was closed on 21 sections of the highways in the Aktobe, East-Kazakhstan, West-Kazakhstan, Karaganda, Kyzylorda and Kostanai regions. Among them, 13 roads are of national and eight of regional significance.

About 265 checkpoints have been set up in the affected areas. The Akmola region has 132 checkpoints, Aktobe and Kostanai regions 85 and 48 checkpoints respectively. A number of food points have also been organised.

The rescue operation involved 148 people and 67 rescue vehicles. It has been decided to bring 375 units of snow-removal equipment in order to clear the highways.

The Khromtau and Kargaly districts of the Aktobe region have declared a state of emergency because of the current weather conditions. A mode of emergency at the regional level has also been declared in the Kokpekty district of the East Kazakhstan region.