ASTANA – President of Kazakhstan Nursultan Nazarbayev consulted on Jan. 18 with the chairmen of both chambers of Parliament, as well as the prime minister and other top officials concerning the initiative of the deputies of the Mazhilis (lower house of Parliament) to dissolve the chamber and set early parliamentary elections, the President’s press service reported. 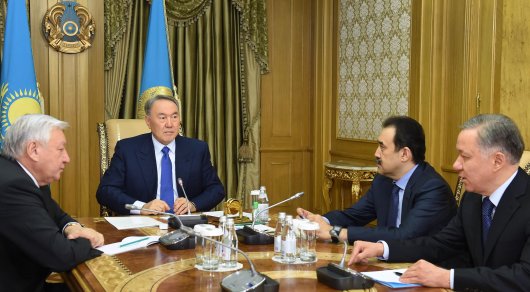 Nazarbayev’s first round of consultations was attended by Chairman of the Mazhilis Kabibulla Dzhakupov, Prime Minister Karim Massimov and head of the Presidential Administration Nurlan Nigmatulin.

Nazarbayev stressed that the initiative of the Mazhilis is being widely discussed among experts and the media. He noted the proposal to dissolve the chamber and set early election has received broad public support.

Dzhakupov said the main reason for this decision was the need of the parties to update their mandate of trust from the people, obtain broad public consolidation, as well as the need to unite the actions of the Mazhilis and maslikhats in implementation of reforms at all levels.

Additional consultations by the President were attended by Massimov, Nigmatulin and Chairman of the Senate Kassym-Jomart Tokayev.

Nazarbayev noted that the Mazhilis’ proposal is relevant in the framework of far-reaching reforms implemented by the state and the situation in world markets.

He also pointed out that combined elections to the Mazhilis and maslikhats will optimise financial and organisational costs.

Tokayev said it is a timely decision because the Mazhilis needs to get a new mandate of the people’s trust to begin implementing the tasks facing the country.

During a third meeting, Nazarbayev consulted with chairman of the Constitutional Council of Kazakhstan Igor Rogov.

Rogov stressed, that in accordance with paragraph 1 of Article 63 of the Constitution, the parliament or the Mazhilis can be dissolved by the President of Kazakhstan after holding consultations with the chairs of the chambers of parliament and the prime minister.