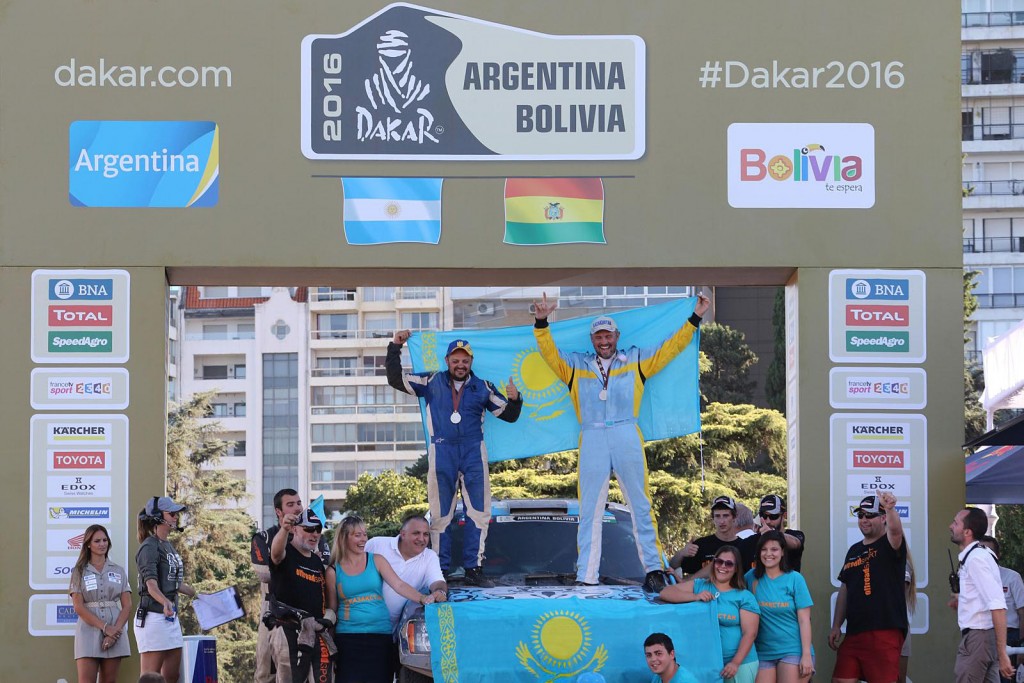 The colours of the flag were presented by the Astana Motorsports crew, including Dakar 2012 bronze metalist Arthur Ardavichus as pilot and leader, Cross-Country Rallies 2015 World Cup winner Ignat Falkov as navigator and Filip Skrobanek as mechanic operating a Tatra car with starting number 515. The Kazakhstan team competed in the passenger’s standings with participation of pilot Andrey Cherednikov and navigator Dmitry Tsyro in a Ford F-150 EBO with starting number 345.

“There ended another Dakar. We are very thankful for the support of our partners, sponsors, friends and fans, for you have been with us. This race was not easy. This is the seventh Dakar on my account and I say that everything just begins. We begin to prepare for the next Dakar and now we go to Kazakhstan and carry with us sacramental medals,” said Ardavichus.

Fifty-five cars started two weeks ago in the T4 (trucks) category. The Astana crew finished the 13th stage in 11th place and took a similar line in the final standings. Its progress was obvious, as the team of riders confidently strengthened its position along with the top teams.

Athletes from Team Kazakhstan came to the 13th stage in 25th place in the general classification standings.

“We did this race with the 25th result of 118 cars launched in early January. It was a hot and difficult Dakar, but it was taken and beaten. We are confident and we are set to continue winning, to achieve goals and highly raise the flag of Kazakhstan in this international, dangerous, but long-awaited rally. We are full of enthusiasm and ready to meet the next Dakar. Go ahead, Kazakhstan!” said Cherednikov.

Representatives of the Kazakhstan Culture Centre in Argentina came to the podium ceremony to support and share the joy of the Kazakh riders and awarded the Certificate of Merit to the riders. The team expressed its gratitude to centre representative Irene Wagner and Kazakh consul in Brazil Rauan Akim.