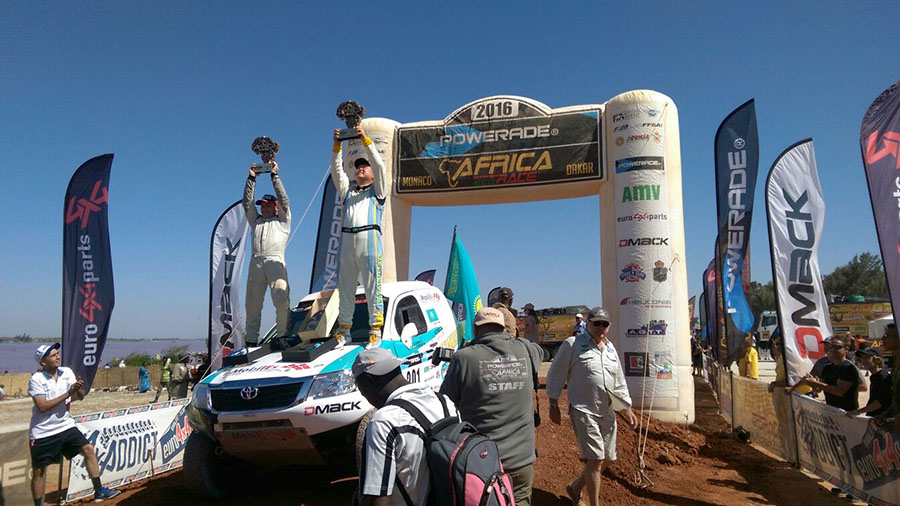 It is the first time a Kazakh team has won an African rally. Even though Shagirov and Yevtyekhov finished the last day in 23rd place, four minutes and 41 seconds behind stage winner Philippe Gosselin (Optimus MD), in the overall standings they were 24 minutes and 48 seconds ahead of Pascal Thomasse (Optimus MD) from France with Mathieu Serradori (Proto), from France as well, in third place.

Another crew from Mobilex Racing entered the top 10 of overall standings in cars category – Yuri Sazonov and Alexey Kuzmich, racing a Hummer. They took seventh place and their total time was behind Shagirov’s and Yevtyekhov’s by more than four hours. Debutant Yerden Shagirov and experienced co-driver Arslan Sakhimov, also from Mobilex, took 20th place.

Marat Abykayev and Andrey Chipenko of the Off Road Kazakhstan team were the only representatives of Kazakhstan in the T2 category, which is all terrain production vehicles. They won second place in the category.

This year, Yevgeniya Nesterova debuted at the Africa Eco Race 2016 and became the first female motorbike rider from Kazakhstan to participate in such a major event. During the 11th stage, her GPS-tracker stopped working and she had to leave the race. However, during the last stage, the Kazakh athlete from Mobilex Racing riding a Husqvarna continued the race and eventually took 18th place. She became the second female finisher behind Russian Anastasiya Nifontova.

Africa Eco Race is an annual rally that crosses Morocco, Mauritania and Senegal. In addition to the racing, the event tries to bring attention to security issues, sustainable development and eco-responsibility.