By Malika Orazgaliyeva in Nation on 14 January 2016

ASTANA – The Jan. 13 initiative of the deputies of the Mazhilis (lower chamber of Parliament) to ask President Nursultan Nazarbayev to dissolve the chamber and set early parliament election was supported by the National Consumers League (NCL), the Assembly of People of Kazakhstan (APK), the Youth Congress, Association of the Deputies of Maslikhats, representatives of the national movement Kazakhstan 2050 and the Civil Alliance of Kazakhstan, vlast.kz reported on the same day. Also, they supported an idea to hold early election for maslikhats (local assemblies) of all levels. 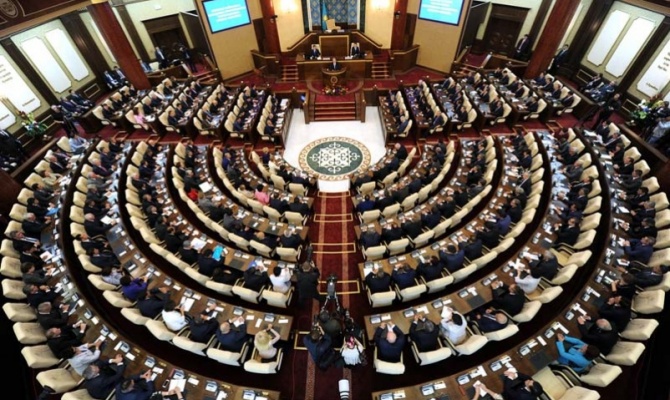 “We state that holding early parliament elections is a correct and timely decision at the start of a new anti-crisis programme. The current composition of the Mazhilis of Parliament did a lot for the development of the country and society. However, early election will mobilise our society and will allow the beginning of crisis management and protection measures for our economy and the country as a whole,” the national movement Kazakhstan 2050 stated.

The Association of the Deputies of Maslikhats also supports and shares the initiative to hold early Mazhilis election in Kazakhstan, as well as elections for maslikhats of all levels.

“Today, in circumstances of  the global economic crisis affecting the economies of many countries, there is a need to immediately start implementing the reforms of the President concretised in the Nation Plan ‘100 concrete steps’ devoted to overcoming the crisis,” the association said in its statement.

The NCL of Kazakhstan in an address noted that holding early parliament election is an extremely timely decision, which meets the spirit of the time. The league also expressed confidence that the election will demonstrate the unity of the people and their support for the anti-crisis policy of the country.

In turn, the APK believes that the fifth convocation of the Mazhilis played its historical role in making changes in the country’s national legislation. However, the lawmaking body needs to update its mandate for further effective implementation of fundamental reforms, ensuring the rule of law, formation of an open government, as well as ensuring the country’s constant economic growth in difficult conditions.

“This step is a logical decision on the threshold of big reforms on the implementation of anti-crisis measures. It will update the mandate of the deputies, as well as attract new force into the main legislative body,” the Youth Congress of Kazakhstan noted in a statement.

The Civil Alliance of Kazakhstan, bringing together the largest network of non-governmental organisations in the country, also expressed support for the initiative of the deputies of the Mazhilis of Parliament to hold early parliament elections for maslikhats of all levels. In their opinion, it will provide new opportunities for political parties to increase their participation in the implementation of reforms and overcome the consequences of the global crisis.

The decision on whether to bring forward the election from November 2016 now rests with the President who needs to consult the chairmen of both chambers of Parliament and the prime minister before making it.

The previous parliamentary election in January 2012 led to the three-party Mazhilis with the ruling Nur Otan party holding the overwhelming majority out of 107 seats.