Impact of Lifting of Sanctions on Iran Discussed in Astana

By Aiman Turebekova in International on 29 January 2016

ASTANA – The opportunities presented by the fact that sanctions on Iran are being lifted under the Joint Comprehensive Plan of Action (JCPOA) were discussed at a special briefing at the Kazakh Foreign Ministry on Jan. 28. 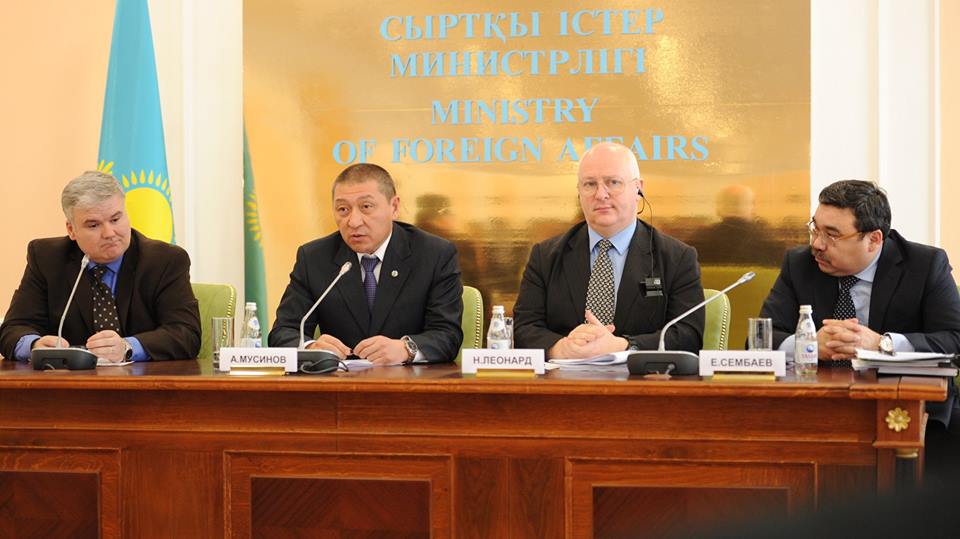 Economic counsellors at the United States’ embassy Patrick Horn and the Delegation of the European Union in Kazakhstan Niall Leonard took part in the briefing hosted by Deputy Foreign Minister Askar Mussinov. Representatives of other embassies, Kazakh ministries as well as entrepreneurs interested in the situation concerning Iran came to the meeting.

The main issue of the discussion was a list of the sanctions to be lifted. On Jan. 16, or “Implementation Day,” legislation in the U.S. and the EU came into effect, relaxing significantly the sanctions in place against Iran. This followed the issuing of a report by the International Atomic Energy Agency to the UN Security Council, confirming that Iran had complied with its commitments under JCPOA.

“Against the backdrop of negative events in the world, this agreement is a bright spot and a breakthrough. I would like to underline that Kazakhstan played a significant role in addressing this important international process. Thus, we organised two rounds of talks between the E3/EU+3 (China, France, Germany, the Russian Federation, the United Kingdom and the United States, with the High Representative of the European Union for Foreign Affairs and Security Policy) and Iran in Almaty in 2013. International experts emphasise the key role of Kazakhstan in accelerating of this process,” highlighted Mussinov.

The EU and the U.S. adopted the necessary legal acts to lift all sanctions taken in connection with the Iranian nuclear programme. Authorisation of dual-use goods should be granted by the competent authorities of the member states where the exporter is established.

Iranian persons who are listed under terrorism or human rights violations will continue to be subject to restrictive measures under these regimes which are outside the scope of JCPOA.

Asset Issekeshev, Kazakhstan’s Minister for Investment and Development is planning to lead a delegation of about 170 officials and business people on a trade mission to Teheran on Feb. 6-8 as Kazakhstan seeks to explore the opportunities for cooperation in light of the changing environment.