ASTANA – Would it be completely out of line to include fresh, homemade salads as a grocery item on your shopping list? No, not in a 130-nation country like Kazakhstan, where the tradition to spice up a casual once-a-month dinner with Korean salads is a “no surprise idea.” 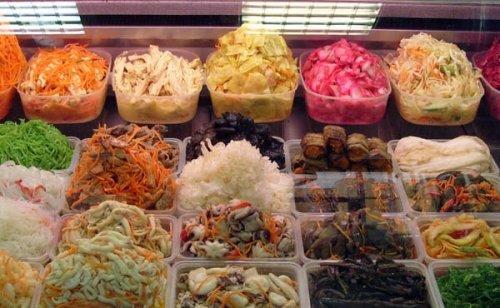 “People in Kazakhstan like Korean salads, but not only in Kazakhstan. I used to sell in Kyrgyzstan and some Koreans made fortunes back in the 1990s in Russia [just by selling salads],” said 74-year-old Galina Lee, a salad maker with 30-plus years’ experience, as evidence of the popularity of Korean salads in Central Asia and Russia.

“It was a very lucrative, small business, perfect for Korean housewives who just cooked salads for sale,” she added.

Korean salads are available in nine to ten varieties, the most popular being carrot and Brussels sprout and glass noodle. To make the culinary delights, one must possess utmost knowledge regarding the use of a dozen spices like soy sauce, garlic, roasted oil and kochi, otherwise known as red hot pepper powder, she explained.

“But foreign people who arrive at bazaars sometimes expect to see South Korean food. I have to say our salads are very different, as is our cuisine on the whole. You see, Koreans who were deported to the Kazakh steppes like my parents had to survive in the dug-outs fighting off wolves and desert spiders. They longed for food they were used to, which was mostly sea weed, sea food and fish – the food their ancestors had been eating for centuries. But because they didn’t have anything like that in Kazakhstan they used similar-looking plants, grass like cilantro, chives and even dandelion,” said Lee with a slight smile. “My grandmother used to make salads out of green grass by marinating it with various spices to rid it of its original smell.”

But why have the salads become so popular?

“I don’t know why, but I think because people are open in their minds in general and they tasted something new. Also, it was homemade food. The paradox is that Koreans don’t usually eat the carrot salad as often at home. We usually make other types like chive salad, for instance, or often eat kuksu and kimchi.”

In the late 1980s and early 1990s, Korean salads gained wide popularity – the business was up and running at its fullest. Thousands of Koreans from Central Asia, who could travel across the USSR at liberty after Stalin’s death, fled to Russia to sell the tastes of their traditional cuisine.

“The business system was quite easy – my husband would prepare all the props like pill carrots, boil eggs, dice beet roots [which were used for other salads like vinaigrette] and after I came back from the bazaar I would make all the salads for the morning. It was a model for a perfect family-run business. I had hundreds of regulars and we were given special bazaar rows for our salads. It was important to sell everything, because the worst thing about this business is the salads are only tasty when fresh,” said Lee.

Today, such a business scheme has lost its once-lucrative income, she added.

“It is because we were ousted from the market by mass production and supermarkets and big stores started to sell similar salads. Of course, our regulars preferred our salads – there is no comparison between homemade salads and mass production – but it was convenient to have at least something at the supermarkets for dinner rather than going to specially-designated places. They beat us by convenience over quality,” said Lee.

Another factor was the constantly-growing price for supplies.

“While the price for the salads remained at the lowest, the price for vegetables kept growing little by little. It was still profitable to make and sell salads, but the profit margin was going down. As a small business operator, I understood that such business slows down fast. And, imagine the competition! Any Korean woman could make salads,” she said.

Today Koreans still sell salads at markets like Artyom or Evraziya, but the whole business has evolved. Kochi is now added mostly by customer request, and the demand has dropped flat.

“In our age young girls, no matter their nationality or cooking background, can make homemade salads of whatever they like, as the Internet exposed all the secrets. We didn’t give out our secrets in our time,” said Lee.

“Although people always want to eat, we still lose our customers little by little. People always find alternatives. These days, they also prefer convenience to their appetites. Hamburgers, fast food, pizza – that’s what trending today and not some salads. So the best for such businessmen and women is to change their line of work. The increasing prices for vegetables are also hitting their pockets hard. Increasing volumes won’t help, as there is not enough demand and a lot of competition,” she said.

“Small business needs to be constantly growing into something larger, otherwise it will be doomed… but as for the salads, my neighbours and friends of different nationalities still ask me to show them how to cook the salads properly. They say what they buy at supermarkets and bazaars is not the same as what I cook for them. It will always be like that, because what I make for them I make with love and it is not for sale. In our time, we were lucky that people liked what we cooked. I think our cuisine will always be a trend in this country,” said Lee.