Within the framework of Nurly Zhol, the nation’s new economic policy, the Development Bank of Kazakhstan (DBK) will be allocating 11 billion tenge (US$30.1 million) given to it from the National Fund to support  the country’s car assembly plants. The funds will be directed to four commercial banks to lend to individuals purchasing domestically-produced vehicles, according to the bank. 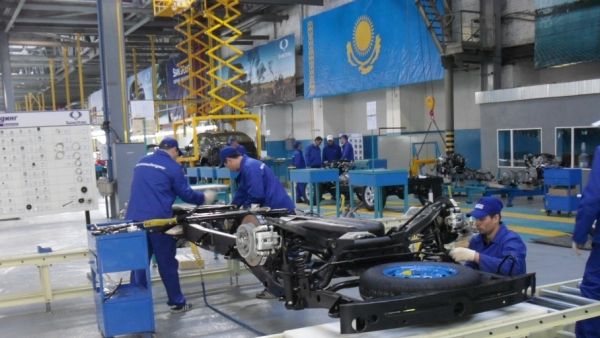 The terms of the loans approved by the government  are as follows: a nominal interest rate not more than 4 percent per annum, with an annual effective rate (including the cost of insurance and vehicle registration as a pledge) not exceeding 7.5 percent APR. The loan term will be up to five years, the loan currency in tenge, the cost of one unit of passenger car no more than 9 million tenge (US$24,617) and the initial fee (if any) no more than 20 percent of the cost of purchased cars.

Auto loans will be issued by Halyk Bank of Kazakhstan, Eurasian Bank and Sberbank of Russia (3 billion tenge each [US$8.2 million]) and Bank CenterCredit (2 billion tenge [US$5.5 million]).

Borrowers will be offered 37 models from manufacturers such as Chevrolet, Hyundai, Kia, Skoda and Toyota. Assembly is completed by SaryarkaAvtoProm and AsiaAuto. Approved funding limits are up by 5.5 billion tenge (US$15 million) for each automaker.

“The effectiveness of the programme became apparent the month after the launch, increasing sales of locally-produced cars by half. This interest is due to the high popularity of the acquisition of car loans in Kazakhstan and launched a government programme of concessional lending to the minimum rates. It was self-timed and effective by providing the opportunity to transfer to a new car with maximum ‘financial comfort.’ The programme was successfully implemented with the support of the government. Baiterek Holding really gave a powerful impulse to the development of the automobile market of the country and the local auto industry, in particular by increasing the share of Kazakh-produced cars to 17.6 percent of the sales of official cars. The car industry gives a great multiplier effect to related industries, introduces innovative technologies, attracts foreign investment and creates thousands of jobs,” said Association of Kazakhstan’s Auto Business President Andrey Lavrentiev.

As of Dec. 31, DBK confirmed 4,588 applications totalling 14 billion tenge (US$38.3 million) had been received by six commercial agent banks from individuals seeking loans under the preferential car loan programme. Of these, six second-tier banks issued 4,096 loans totalling 12.9 billion tenge (US$35.5 million) to purchase vehicles from domestic automakers. Thus, of the 15 billion tenge (US$41 million) allocated from the first tranche, 86.14 percent of the funds were utilised.