By Malika Orazgaliyeva in International on 15 January 2016

Deputy Minister of Foreign Affairs of Kazakhstan Yerzhan Ashikbayev promoted the international initiatives of President Nursultan Nazarbayev and Kazakhstan’s candidacy for a non-permanent seat on the UN Security Council for 2017–2018 during a Jan. 11-13 visit to New York, reported the Kazakh Ministry of Foreign Affairs (MFA). 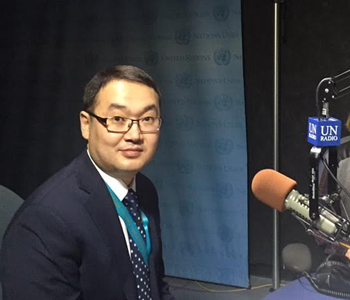 During his visit, Ashikbayev briefed ambassadors from the African Group, and the Caribbean and Latin America on Kazakhstan’s latest foreign policy initiatives.

Ashikbayev noted the President’s initiatives on fighting terror and extremism, including organising a high-level event “Religions against Terrorism.” He also briefed the group on the President’s ideas for an allocation by each country of one percent of military expenditures to finance Sustainable Development Goals, the transformation of the Economic and Social Council (ECOSOC) into the Council for Global Development and the establishment of a supranational currency.

Ashikbayev informed the participants on preparations for EXPO 2017 and plans to establish a Centre for Renewable Energy, as well as investment projects based on the infrastructure of the exhibition, under UN auspices.

Ashikbayev also met with permanent representatives of the member countries of the Southern African Development Community (SADC), where the sides discussed increasing cooperation between Kazakhstan and African countries within the framework of the UN agenda on sustainable development for the period up to 2030.

The deputy minister also participated in a side event on “Ethics and the implementation of Sustainable Development Goals.”

During the meeting with UN Assistant Secretary General for Political Affairs Miroslav Jenča, the parties discussed the initiatives of President Nazarbayev and prospects for their implementation within the UN.

As part of the campaign to promote Kazakhstan’s candidacy for a non-permanent seat on the UNSC for 2017–2018, Ashikbayev held bilateral meetings with the permanent representatives of Guatemala, Nauru, Samoa, Mozambique, Bahrain, Brunei and other countries.

Ashikbayev also gave an interview to UN Radio, where he gave detailed information on Kazakhstan’s initiatives and UNSC campaign.