By Kamila Zhumabayeva in Nation on 25 January 2016

ASTANA – Copenhagen-based architect and urban design consultant Jan Gehl examined peculiarities of Almaty and has developed key recommendations on how to make the metropolis comfortable for Almaty’s residents and tourists, InformBuro, an informational and analytical website, reported Jan. 8. 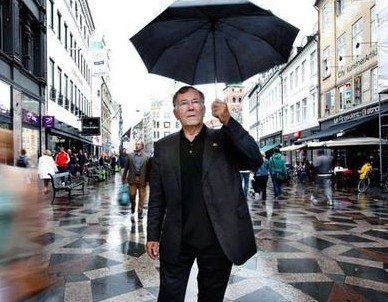 A pilot project to create pedestrian areas, places of leisure, sports and children’s playgrounds within the concept of Gehl was launched in eight districts of the city in 2015, according to InformBuro. The city network of bike paths has also been greatly expanded.

The Danish urbanist was expected to meet students, nongovernmental organisation representatives and art patrons in Almaty. His visit was held on the invitation of city authorities from Jan. 11-13.

During an extensive programme on his three-day visit, Gehl was expected to personally present his concept on changing the appearance of the southern capital, hold several meetings with Almaty’s management, Urban Planning Council and private companies that are engaged in the field of city improvement and landscaping, according to a statement from Almaty Natural Resources Management.

According to InformBuro, in March last year, former Akim (Mayor) of Almaty Akhmetzhan Yessimov offered Gehl the opportunity to dramatically change the appearance of Almaty. Gehl then passed along and across the centre of Almaty, examined the most typical streets, squares, parks and later developed key recommendations on how to make the metropolis comfortable for all Almaty residents and tourists.

“Our city has made a very good impression on Mr. Gehl. We agreed that there are many aspects that can be developed, while preserving and highlighting the uniqueness of Almaty. They all lie in his ‘the city for people, not for cars’ concept,” Yessimov said then, according to the website. “In the nearest time, we will present the results of our work together to all Almaty residents, not only for information but also for a constructive debate and making suggestions.”

Gehl is known as a major researcher of municipal public areas and the psychological aspects of their use and one who formulates optimal solutions by means of architecture and urban planning for the typical problems of this sphere.

The Danish architect has served as a consultant for municipal administrations around the world. His ideas were first used in his native Copenhagen and later in the cities of Europe, North America, Asia and Australia, InformBuro reported.

Gehl is also the founder of the Gehl Architects firm. Improving the quality of life in cities by reorienting urban design for pedestrians and cyclists is Gehl’s main area of activity, according to the website.