By Aiman Turebekova in Sports on 15 December 2015

ASTANA – An International University Sports Federation (FISU) delegation led by Director of the World Winter Universiade at FISU Milan Augustin recently visited the venues to be involved in the Winter Universiade 2017 to review the construction progress and the technical aspects of the preparations for the event, reported the press office of the Organising Committee for International Sports Events in Almaty. 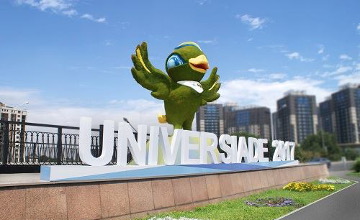 “Preparation goes well and in consonance with the plan; I think [the facilities] will be completed on time and according to international standards,” said Augustin.

On Nov. 29, 2011, the FISU announced Almaty as the host city of the 28th Winter Universiade 2017. Universiades, which are for many athletes the beginning of their careers in sport, will take place in the former Kazakh capital from Jan. 28 to Feb. 8, 2017.

During the week, the delegation visited sport venues including Shymbulak Ski Resort, the high-mountain sports complex Medeu, International Ski Jumping Complex Sunkar, Baluan Sholak Sports and Culture Palace, Alatau Cross Country Skiing centre and Biathlon Stadium, as well as venues that are under construction, such as the 3,000-seat Ice Arena, the 12,000-seat Ice Palace and an athletes’ village for 5,000 athletes.

“I find these venues fantastic. The most modernised technologies will be used for the preparation of ice. In the future, this Ice Palace will play an important role in the development of sport. This is the first time that an Athletes’ Village is being built for the Universiade. Five thousand athletes will be able to live here during the competitions. This Universiade will be different than previous Universiades,” said Augustin. FISU representatives also noted the unique features of these venues.

In 2014-2015, FISU members held several meetings to learn about preparations for the Universiade.

“In the three years that have passed since the announcement of the result, the organising committee has done a lot, including the reconstruction of old objects and ending with the preparation of infrastructure and transport for athletes and members of FISU. But, of course, much work remains to be done, and I think in 2017 you will be able to fully appreciate all the changes that have taken place in your city,” Augustin said last year in an interview with sport.kz.