US Thanks Kazakhstan for Assistance in Implementing Nuclear Deal with Iran

By Georg R. Vassilenko in International on 29 December 2015

ASTANA – U.S. Secretary of State John Kerry thanked Kazakhstan along with other countries for their contribution in the implementation of Iran’s nuclear deal on Dec. 28. 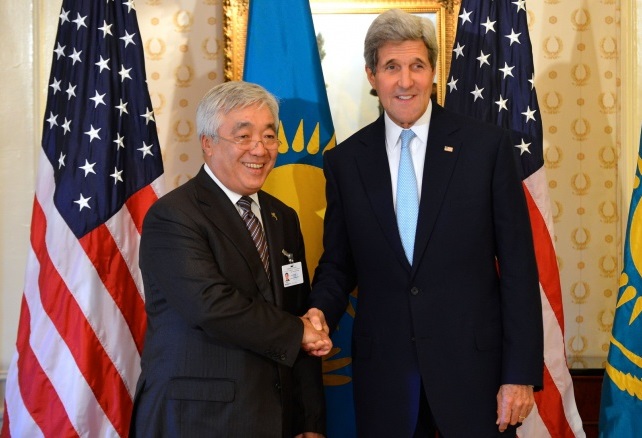 In a statement released by the Department of State, Kerry praised progress in the implementation of the deal brokered in July 2015.

“Kazakhstan contributed significantly to this effort as well, providing some of the natural uranium material that Iran has received in exchange for its enriched material, and helping to facilitate the shipment. Kazakhstan’s contribution builds on its hosting of early rounds of the P5+1 (China, France, Russia, the UK, the U.S. + Germany) talks that led to the successful conclusion of the JCPOA.”

JCPOA stands for Joint Comprehensive Plan of Action, agreed to in mid-July. In 2013, Almaty, Kazakhstan’s largest city, hosted two rounds of P5+1 talks with Iran which contributed to the resumption of talks after a lengthy stalemate.

Kerry also spoke with Foreign Minister of Kazakhstan Erlan Idrissov to convey the thanks of the U.S. for all of these efforts.

“A number of commercial transactions made this shipment possible, with many countries playing important roles in this effort. Russia, as a participant in the JCPOA and a country with significant experience in transporting and securing nuclear material, played an essential role by taking this material out of Iran and providing natural uranium in exchange,” Kerry noted adding that in addition to Kazakhstan, Azerbaijan also played a key role in facilitating the shipment.

Another country recognised by Kerry was Norway.

“I also want to extend the sincere and full gratitude of the United States to the Kingdom of Norway, a country long committed to non-proliferation and a country that matches that commitment with actions,” the U.S. top diplomat said. “In this vitally important case, Norway contributed critical funding to the commercial transactions involved in reducing the amount of enriched uranium in Iran, and also provided expertise in managing some of these transactions. These efforts represent a significant contribution by Norway to a safer world, and the collaboration between the U.S. and Norway in this endeavor continues a long history of cooperation on non-proliferation of nuclear material. I spoke today with Foreign Minister Brende to thank him personally for his leadership in this area.”

A ship departed Iran for Russia carrying over 25,000 pounds (11,340 kgs) of low-enriched uranium. The shipment included the removal of all of Iran’s nuclear material enriched to 20 percent. This was a great step for Iran in order to meet its commitment to have no more than 300 kg of low-enriched uranium by Implementation Day.

“Implementation Day will come when the International Atomic Energy Agency (IAEA) verifies that Iran has completed all of these nuclear commitments, which increase Iran’s breakout time to obtain enough nuclear material for a weapon to one year, up from less than 90 days before the JCPOA,” Kerry said.

The Secretary also stated, “The IAEA now must verify that Iran’s enriched uranium stockpile is 300 kg or less, as well as confirm that Iran has met all of its other key nuclear steps in the JCPOA before Implementation Day can occur. These steps include removing much of Iran’s uranium enrichment infrastructure. Iran also must remove and render inoperable the existing core of the Arak Reactor, effectively cutting off Iran’s plutonium pathway to a nuclear weapon. We will continue to consult closely with both the IAEA and other P5+1 members as we move toward verification by the IAEA that Iran has met all of its key nuclear commitments.”