ASTANA – Commissioner of EXPO 2017 and First Deputy Minister of Foreign Affairs of Kazakhstan Rapil Zhoshybayev paid a working visit to Turkmenistan Dec. 2, reported the press service of the Ministry of Foreign Affairs, announcing that Turkmenistan confirmed its participation in EXPO 2017 in Astana. Later, Minister of Energy of Kazakhstan Vladimir Shkolnik travelled to Azerbaijan for several meetings, including the signing of the official agreement on Azerbaijan’s participation in the event. 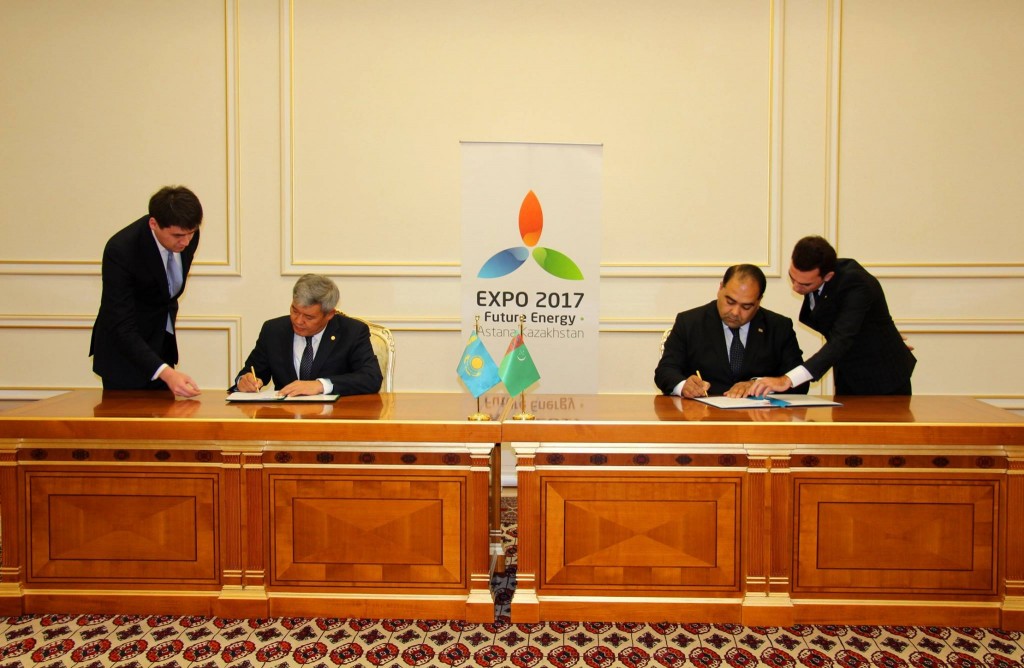 The formal agreement on Turkmenistan’s participation in EXPO 2017 in Astana is signed Dec. 2.

Zhoshybayev had several meetings with Chairman of the Chamber of Commerce and Industry (CCI) and Commissioner of the National Section of Turkmenistan Dovran Orazmuradov and with First Deputy Foreign Minister of Turkmenistan Vepa Hadjiev.

Zhoshybayev noted that Turkmenistan was among the first countries to officially confirm its participation in the event and expressed confidence that the Turkmen pavilion would be one of the most attractive. Orazmuradov expressed gratitude to the Kazakh side for providing them one of the central pavilions in the expo and said Turkmenistan is ready to show new developments in the sphere of green energy. The country is currently elaborating its National Climate Change Strategy, the priorities of which are introducing energy-effective and energy-saving technologies and developing renewable energy sources.

Following the meeting, Zhoshybayev and Orazmuradov signed the formal agreement on Turkmenistan’s participation in EXPO 2017.

The sides also discussed the current state and prospects of Kazakh-Turkmen cooperation in all directions, particularly in terms of the tasks set before Kazakhstan by President Nursultan Nazarbayev in his Nov. 30 State of the Nation address.

On Dec. 4, Baku hosted the 12th session of the Azerbaijan-Kazakhstan Intergovernmental Commission for Economic Cooperation under the chairmanship of the ministers of energy of Azerbaijan and Kazakhstan, Natig Aliyev and Shkolnik.

“Over the period of its functioning, the Azerbaijani-Kazakh Intergovernmental Commission has greatly contributed to the expansion and deepening of bilateral ties in trade and economy, energy, transport, agricultural, culture, tourism as well as in the environmental protection, communications and high-tech sectors,” said Aliyev. 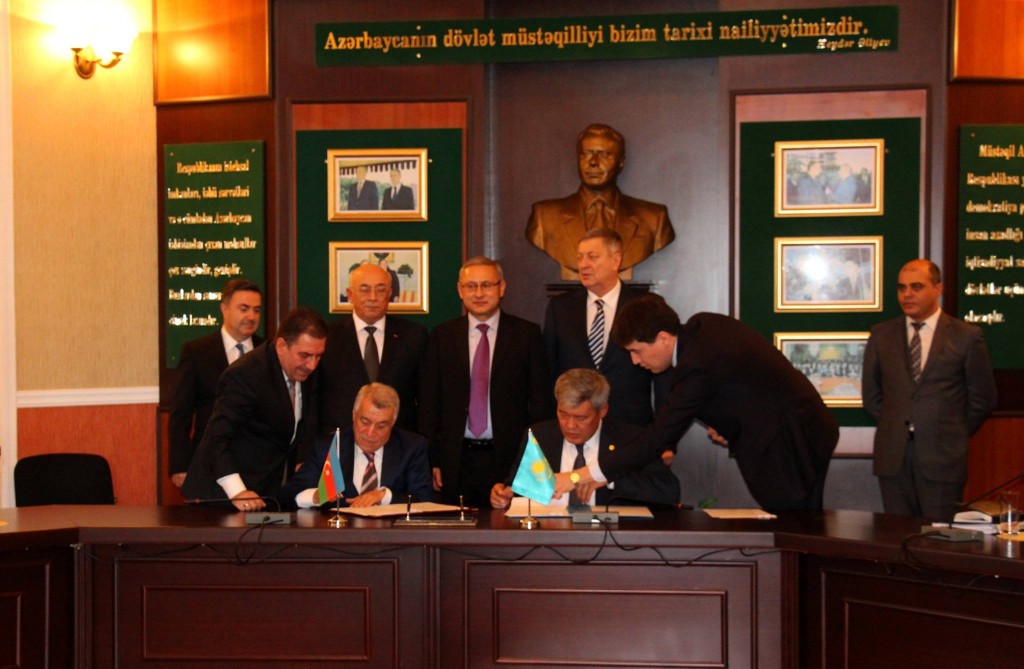 The agreement on Azarbaijan’s participation in EXPO 2017 in Astana is signed.

According to him, despite the fact that trade turnover has declined between the two countries as a result of the global economic crisis and falling energy prices, the countries can see the situation improving if new mechanisms for economic cooperation are worked out. In this regard, Azerbaijan and Kazakhstan are searching for new mechanisms for raising trade turnover between them, Aliyev added.

The ministers also discussed organisational and technical aspects of EXPO 2017 and the prospects of bilateral cooperation in renewable and alternative energy. Aliyev expressed confidence that Astana has all the necessary capabilities and potential to successfully host the expo and said Azerbaijani scientists are ready to show their best discoveries in the field of green energy at the exposition.

An important outcome of the meeting was the signing of the formal agreement on the participation of Azerbaijan in EXPO 2017.

According to the Strategic Plan of the state company for developing alternative and renewable energy sources of Azerbaijan, alternative energy by 2016 will be able to provide 830 megawatts (MW) or 12–15 percent of the total generating capacity of that country. By 2020, this figure could reach 2,500 MW, or 20–25 percent of total capacity. According to Azerbaijani experts, the greatest potential impact of the plan is in the increased use of energy from wind, photovoltaic plants, solar thermal systems, the incineration of household waste, geothermal sources and small hydroelectric power.

Fifty-seven states and 13 international organisations have officially confirmed their participation in EXPO 2017, with 18 participation agreements signed and 30 section commissioners appointed so far.