By Kamila Zhumabayeva in Culture on 8 December 2015

ASTANA – The unique style and convenience of Kazakh fashion brands, particularly Salta, may be the reason local women make up the list of their loyal clients, some as fans and others as friends. An individual and friendly approach, sizes adapted for Kazakh figures and fabrics for the country’s weather, simple yet distinguished looks and patriotism are winning Made in Kazakhstan fashion loyalty from domestic clients. 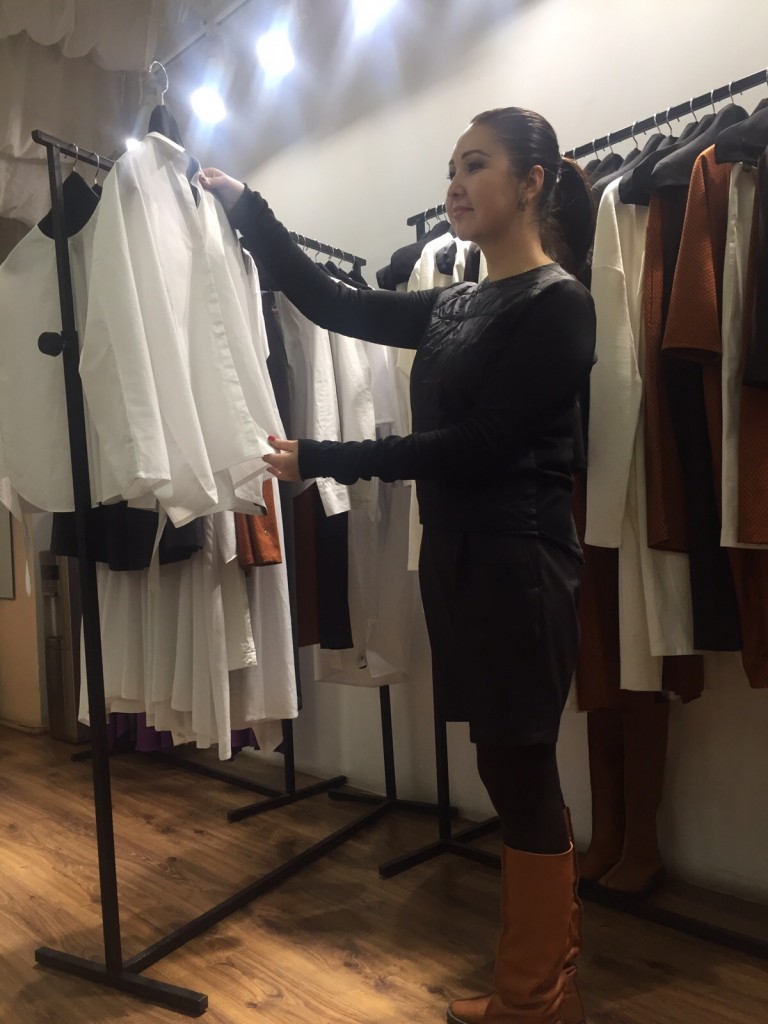 “Salta combines ethnic and modern designs and I like that it allows you to simultaneously look stylish and simple. Dolce & Gabbana has a lot of rhinestone and over-coloured designs which I think depend on each person’s taste individually,” Salta client in Almaty Dinara Kairbekova told The Astana Times.

She likes the brand because it is stylish despite not having Swarovski stones, and a person wearing it will stand out from the crowd regardless of the plain design.

“A lot of people note it and always ask where I bought that cool thing… I then direct them all to Salta.” They later end up being customers as loyal as she is, she said with a laugh.

Ninety percent of Kairbekova’s closet is composed of Salta clothing, shoes and accessories. She was wearing a dress, coat and bag from the collection while giving the interview.

“Many wonder if I am an acquaintance or a relative of Salta [Saltanat Baimukhamedova] and that is why I’m wearing this brand a lot, but no, it’s just really very comfortable! Once you wear a dress from Salta, you will really be her constant client,” she added.

“I like Kazakh designers because first of all I’m a patriot of our country. I particularly want our people and production to grow with that little help of mine… Secondly, I like the unique style of Salta a lot. I also like Japanese and Italian brands, but Salta in particular embodies Italy and Japan making it a Kazakh brand,” she told the paper.

The clothes are very wearable and a Salta dress can be paired with trousers or its skirt can be worn as a dress. The various combinations are a convenient and frugal way to enhance one’s wardrobe.

“Salta is not a bit worse and maybe even better than my favourite Japanese fashion designer Yohji Yamamoto. Lastly, the clothing has been adapted for Almaty; the designer knows our seasons and her brand is targeted at our weather. Italian winter and summer clothes, as you know, are silk and other thin fabrics that sometimes are impossible to wear here,” said Haumenova.

She always buys something from each new collection and while she can afford to shop at the world’s premium fashion boutiques like Gucci, Louis Vuitton and Yohji Yamamoto, half of her wardrobe still contains Salta.

Among other Kazakh fashion brands, Haumenova mentioned Vesna men’s and women’s clothing. She feels the designs are nice and at times she purchases the styles.

Haumenova bought her first Salta, a Kazakh style jacket with national ornamentation, about 15 years ago.

“I was stunned. It was worth quite some money at the time and was handmade with natural velvet. When I was wearing it, people were turning around and looking at me,” she said.

“My daughter is settled with Salta and wears it with pleasure despite ultra-trendy requirements at her age,” said Haumenova.

Clients appreciate the assistance they receive from associates at the shop, who delicately tell a customer if something does not flatter her figure and suggest styles that might better suit.

“I like that when you come to a boutique, shop assistants there don’t have a goal to sell clothes to you and profit. They have a goal to make Salta’s clothing be well presented, especially in the city,” said client Kamila Akhmetova.

She mixes international labels with domestic and Russian brands. Although she does not know many Kazakh designers, Akhmetova always buys one or two items at Salta because she considers the clothes are comfortable, especially since she became a mother.

“I don’t often buy from other Kazakh designers who present their collections at fashion weeks, for example, because I don’t like their style, quality of their fabrics and colour range. Salta has dark shades like black and grey which I prefer the most. I also don’t like over-styled design, lace and spangle; that is why among all Kazakh designers I knew about Salta first,” she said.

Akhmetova noted she also likes Malli, a small Kazakh brand named for founder and designer Manshuk Kuanisheva. Styled more for dinner and evening wear, Malli is in great demand among Almaty fashionistas. She also wears Pentatoniсa, a Made in Kazakhstan brand known for its connection to constructivism and minimalism with femininity.

Baimukhamedova opened her brand in 2008 and has become one of the most recognised fashion designers in Kazakhstan, noted an article in the Internet magazine Vlast. The brand has a policy that every person should have her own style and assistants at the shop have good relations with their customers.

“I’m not just a client, we communicate well with each other and assistants treat their every client as a friend. They give honest advise which some might not be comfortable with, but I’ve never seen such a response yet. People can go there not knowing what they want, they just come and decide there…,” said Akhmetova. “I can afford more expensive brands but some of their clothes might not be very comfortable and if that’s the case, you wouldn’t want to spend so much money. That is why Salta combines both price and quality.”

At times, however, she feels certain items from Salta’s collection that come out once a year are not in line with their cost and prices can be unjustifiably overestimated.

“Knowing I can buy the same thing from an international brand on sale somewhere, I would go for it. It might also be merely a preformed opinion because a Kazakh brand is not recognised by global brands; knowing their quality and looking at our designers, you think you are not going to pay a lot for such a thing,” said Akhmetova.

There was a time she was a frequent Salta customer, often buying in quantity, but Akhmetova is now more moderate than the designer’s other clients.

“It might be because of the latest economic situation in our country and Salta’s fabrics are coming from abroad, so I noticed I am buying much less from them now,” she added.

A shop assistant at the Aida Kaumenova boutique in the city’s Keruen Shopping Centre spoke on the question of value.

“The price range of 100,000-120,000 tenge [nearly US$325-$390] is not a high price for exclusive designs, colours and styles made of Italian fabrics, including the work of a sewing master who deals with fragile fabrics like velvet and velour,” said the woman, who asked that her name not be mentioned.

She added the prices for clothing of such quality are reasonable compared to dresses in neighbouring boutiques that cost 1-4 million tenge (around US$3,250-$13,000) per item.

“Chanel and D&G create unique fabrics which in total with the product cost a lot of money, but it will not be made in a single copy. People who chose Kazakh designers for custom tailoring receive a unique product sewed individually for them and the high cost is due to that,” said founders and designers Olga and Tatyana Stan.

Pentatonica designer Kira Maisheva noted there are currently a number of worthy Kazakh apparel brands on the market that can compete with world-famous logos in terms of quality and design.

“It seems to me that people with money are interested in wearing not only brands alone, but also their personality; for example, a brand that is owned by person whom you are familiar with or have respect for his or her work and talent,” she said.

While many clients can afford to shop at world-famous high fashion boutiques where the prices may be the same or higher than those at certain domestic designer shops, some still prefer Made in Kazakhstan to international labels and are willing to pay the extra amount, even if those prices are not always in line with what they should be.