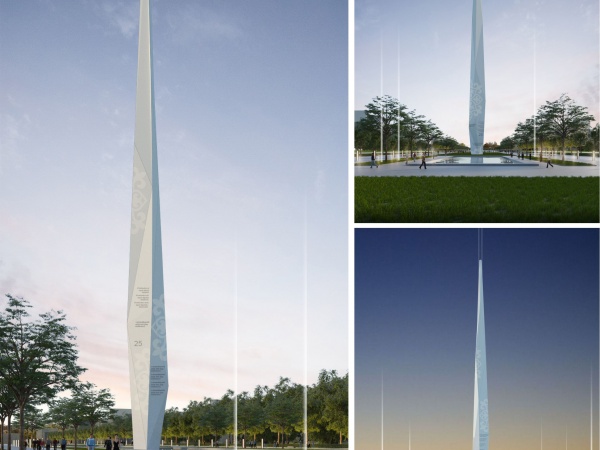 A Monument dedicated to the 25th anniversary of Kazakhstan’s independence will be installed in Astana next year. Yedil Alimbekov from Almaty won a national contest, reports the city akimat (administration).

According to Alimbekov, the stele-shaped monument reaching into the sky will include 25 edges, each of which represents one of the milestones reached by the nation in the period of independence from 1991 to the present day.

“The universal and international form of strict geometric vertical was used as a stylistic solution of the object. A light silver colour of the suggested material, which is titanium, meets futuristic skylines and is interpreted as a further movement of the country along the path of creation. The monument, moving up to the sky, marks our best aspirations and spiritual impulses. The future of the world is the pinnacle of the creative spirit. Twenty-five facets represent 25 years of independence, 25 important events in the history of modern Kazakhstan,” according to the description of the project.

The monument will be sent to the State Commission on Monuments, where the final location will be determined, as the contest participants offered three options.

Sixty-six works were submitted for the contest. Kazakhstan will celebrate its 25th anniversary of independence in December 2016. President Nursultan Nazarbayev emphasised that the upcoming holiday should be celebrated without unnecessary budget spending.