By Malika Orazgaliyeva in International on 24 December 2015

ASTANA – Kazakhstan’s multivector foreign policy has proven its effectiveness against the backdrop of growing challenges internationally, Foreign Minister Erlan Idrissov said during a Dec. 23 press conference to discuss the foreign ministry’s 2015 work and plans for the next year. 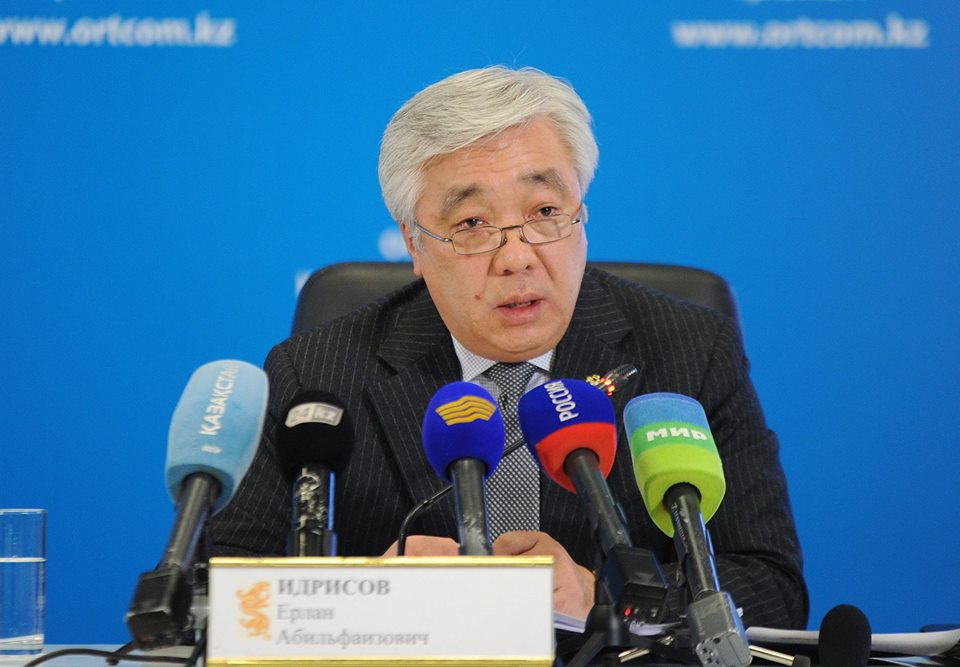 He listed numerous landmark events and achievements during the year.

First, Idrissov noted the early progress of the Eurasian Economic Union (EAEU), which came into effect Jan.1, and Kazakhstan’s economic interests in the organisation.

“This new association of the 21st century was created at the initiative of President Nursultan Nazarbayev first proposed in the early 1990s. The EAEU is based on the principles of equality, mutual benefit and the interests of all parties. First of all, Kazakhstan is looking for its own national interests,” he said.

He also said of the Congress of Leaders of World and Traditional Religions, a Presidential initiative held in Astana in June, that the “participation of high-ranked political and religious leaders at the fifth congress is evidence of solid support of Kazakhstan’s initiative by the international community.”

In June, the government signed a resolution extending a pilot project on a visa-free regime up to 15 days for the citizens of some politically and economically stable countries, such as the United Kingdom, Italy, South Korea, Malaysia, the Netherlands, the United Arab Emirates (UAE), the United States, France, Germany and Japan. The list was later expanded to 20 countries, including Australia, Belgium, Hungary, Spain, Monaco, Norway, Singapore, Finland, Sweden and Switzerland.

Idrissov also noted that the intensive negotiation process to simplify the visa regime with the European Union continues and that the establishment of the Astana International Financial Centre is expected to lead to visa-free regimes for citizens of Organisation for Economic Co-operation and Development (OECD) countries, as well as Malaysia, Monaco, the UAE and Singapore beginning Jan. 1, 2017.He also noted that Kazakhstan is modernising its visa processes and has issued 242,645 visas in the first 11 months of this year.

Idrissov also called Kazakhstan’s Aug. 27 signing of an agreement with the International Atomic Energy Agency to host a Low Enriched Uranium (LEU) Bank in Oskemen, Kazakhstan an event of global scale and said the United Nations General Assembly’s adoption this year of the Universal Declaration for the Achievement of a Nuclear-Weapons-Free World proposed by Nazarbayev on Sept. 28 demonstrates support by the international community for Nazarbayev’s vision to achieve a nuclear-weapon-free world by 2045.

Idrissov also noted that in 2015, Nazarbayev made 13 foreign visits and received 32 heads of state, governments and international organisations. In total, the Kazakh Ministry of Foreign Affairs (MFA) was involved in 38 major international events, 70 bilateral visits and the foreign minister held 13 visits abroad.

“I would like to emphasise the productive visits of the President to Moscow, Beijing, London, Paris and many other capitals, which resulted in the signing of 275 economic agreements totalling about 170 trillion tenge ($60 billion). The implementation of agreements achieved at the highest level, especially in the field of economic cooperation, remains a key priority of the MFA,” he said.

Idrissov underlined that Kazakhstan supports the ideology called “from Great Game philosophy to Great Gain philosophy,” which foresees a “win-win” situation for all countries of the world.

Also, the visit of European Union High Representative for Foreign Affairs and Security Policy Federica Mogherini and the Dec. 21 signing of a new Kazakhstan-EU agreement on enhanced partnership and cooperation (EPCA) were mentioned among the most important achievements of the outgoing year.

Idrissov also addressed the priorities of his ministry for 2016.  Attracting foreign investment, concluding foreign trade agreements and promoting the export of Kazakh products will be priorities in the coming year.

Idrissov noted that in 2016, the Kazakh Foreign Ministry will continue to promote Kazakhstan’s candidacy for UN Security Council (UNSC) non-permanent membership in 2017-2018.

The implementation of the Foreign Policy Concept of Kazakhstan for 2014-2020 will also continue as well as efforts to further integrate the country into the world economy and transform the country’s infrastructure.

According to Idrissov, the most important function of the MFA is to protect the rights of citizens and legal entities of Kazakhstan as well as their personal, family and business interests abroad.

“We returned more than 500 Kazakh tourists from Turkey this summer, who were stacked there in connection with the bankruptcy of travel agency, Travel System. The MFA together with the Ministry of Health and Social Developmentorganised the transportation of number of our citizens from Germany, Russia and Ukraine on a special board for health reasons. Five citizens of our country from Bahrain and two from Libya rescued from the networks of criminal human trafficking syndicates have been returned to the homeland. In May, we deported the bodies of three family members of the Imankulov family, who died in a plane crash in France,” he said.

“I should note the financial assistance provided to 23 citizens of Kazakhstan, including the evacuation because of the worsening situation in Syria (1), Yemen (1), the earthquake in Nepal (7), returning home from Indonesia (2), Turkey (6), France (1), as well as the delivery of five our citizens from Afghanistan, China, Russia and South Korea,” Idrissov added.

Idrissov mentioned MFA efforts to increase the openness of the state body to citizens and improve its worldwide recognition.

“We are working on the modernisation of the official website of the ministry. Annually, I hold an online Twitter conference. We provide regular feedback to the population by the operational responses to the complaints of the citizens in a blog platform and the social networks of the foreign ministry,” he said.

The minister also took questions from the press and wished citizens a good New Year.