PARIS – Scientists, business representatives and officials engaged in lively discussions in Paris Dec. 7 at the Future Energy Forum at the UN Education, Science and Culture Organisation (UNESCO) with the aim of powering global innovation in future energy sources and technologies. 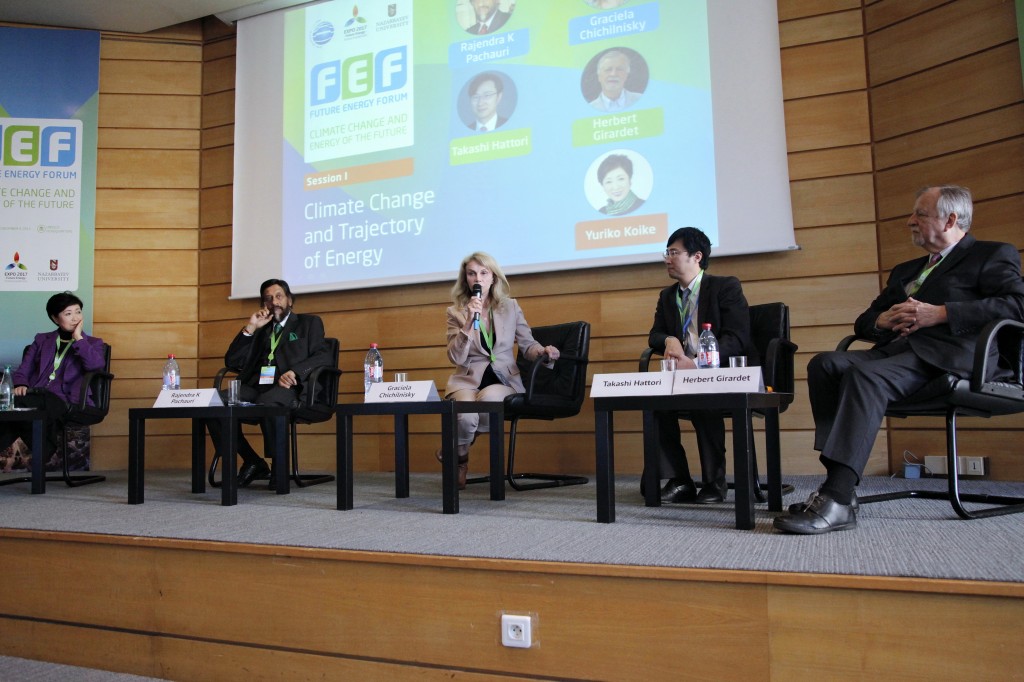 Scientists, business representatives and officials at the Future Energy Forum in Paris Dec. 7

The Future Energy Forum (FEF) was organised by Nazarbayev University in collaboration with the Astana EXPO 2017 National Company as part of preparations for EXPO 2017. The forum, with the theme Climate Change and Energy of the Future, is the second in a series of international conferences organised in the pre-expo period to serve as a multi-stakeholder dialogue platform for experts and officials shaping the landscape of energy in Kazakhstan and beyond, a press release from the organisers said.

The event, which took place during the UN Framework Convention on Climate Change (COP21) in Paris, featured presentations and debates involving energy experts, officials, international organisations and businesses, as well as Nobel Prize laureates and other eminent scientists and economists, all sharing first-hand information about the latest developments in sustainable energy.

Opening the forum, Kazakhstan’s Minister of Energy Vladimir Shkolnik emphasised that the theme of the FEF and EXPO 2017 “covers a wide range of topics related to the future of energy resources and taps into growing global interest in both combating climate change and ensuring sustainable development.” He also highlighted Kazakh President Nursultan Nazarbayev’s initiative to establish an International Centre for the Development of Green Technologies and Investment Projects under the auspices of the UN using EXPO 2017 infrastructure, which he said confirms the Central Asian nation’s commitment to pursuing an environmentally-friendly agenda nationally and globally.

Shkolnik also welcomed the number of experts among participants at the event. “We hope that the competence, experience and recommendations of our colleagues and partners will help us in developing the content of EXPO 2017 thematic events and objects,” he said. According to Shkolnik, “together, Astana EXPO 2017 and the [Future Energy] Forum will serve as a high-level, multilateral, international platform for the debate on the future of energy.”

Addressing the forum, International Bureau of Exhibitions (BIE) Secretary General Vicente Loscertales stressed that his organisation “places utmost importance on EXPO Forums, which are venues where a high-level dialogue takes place and a diverse group of speakers comes together to support the definition and the development of the theme of the upcoming expo.”

According to the event organisers, Kazakhstan, a major energy producer with some of the world’s richest reserves of hydrocarbons and uranium, has embarked on an ambitious transformative journey toward a green economy. Among its sustainability goals is the nation’s key target of generating up to half of its energy from renewable sources by 2050.

“The solution to sustainability issues may be more active introduction of green technologies in the energy sector. This will not only reduce the impact of anthropogenic factors on climate change, but will save the environment,” stated Shigeo Katsu, president of Nazarbayev University and former vice president of the World Bank.

The insights and recommendations generated by the participants are now to be incorporated into the programme of the main Future Energy Forum, which will take place during EXPO 2017, as well as into the content of the flagship pavilion at the Astana expo.

The FEF 2015’s date and place were chosen to coincide with COP21 so as to maximise the presence of the best experts in global climate change and renewable energy issues. The gathering is being attended by dozens of heads of states and governments and is attracting huge attention from international media. Kazakh Prime Minister Karim Massimov led his country’s delegation at the conference’s opening session Nov. 30. 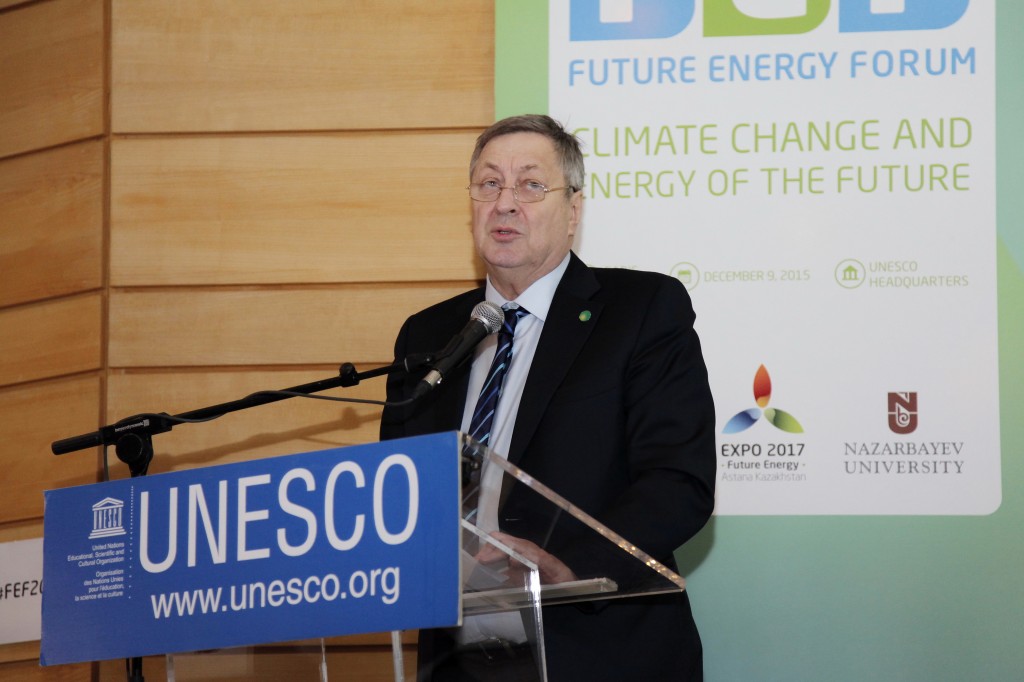 On Dec. 7, the discussion continued in a format of the ministerial (“high-level”) segment. Shkolnik, whose agency is responsible for coordinating the country’s contribution to global efforts to diminish greenhouse emissions, represented Kazakhstan.

In his speech, Shkolnik pointed out that to achieve the global climate target of keeping the global temperature rise to 2 degrees Celsius, Kazakhstan presented its intended nationally determined contribution. According the Energy Ministry press release, Kazakhstan is ready to commit to reducing emissions from the 1990 base year by 15 percent and 25 percent until 2030 “provided there is additional investment in the best technology.”

In his remarks at the segment, Shkolnik highlighted important objectives pursued by Kazakhstan that relate to modernising the fuel and energy complex, developing renewable energy sources, developing scientific and technological potential and improving the quality of the environment, ensuring Kazakhstan’s transition to low-carbon development and green economy.

Modern comprehensive measures to “purify” the national economy from the emissions of pollutants and greenhouse gases will be developed, the Minister of Energy said.