By Zhanna Shayakhmetova in Culture on 22 December 2015

Last year, illustrator and painter Ansagan Mustafa made a debut with an exhibition called “Soile suret” in Astana, featuring highlights of her work between 1995 and 2012. The same solo show was also organised in Almaty, Shymkent, Taldykorgan and Temirtau. 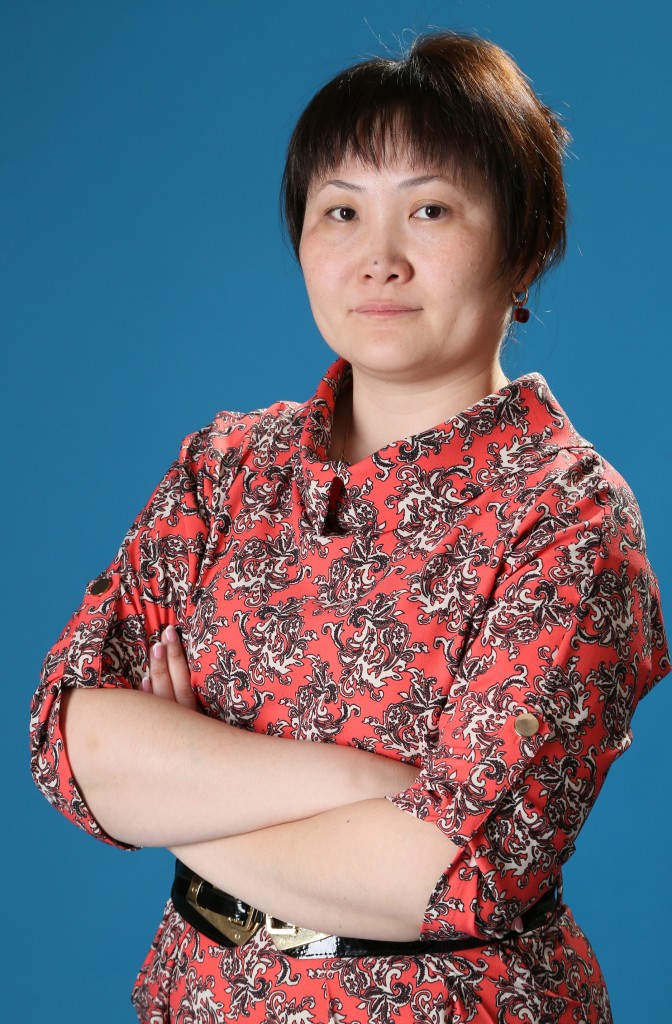 Many first learned of Mustafa through social media and soon after she was named the first illustrator in Kazakhstan who encourages people to think about moral and ethical values, to worship honesty, respect elders and practice patriotism. Some art lovers compare her art pieces to the old Soviet propaganda posters, as this form of art is very compelling and powerful.

French writer Stendhal once stated that only great minds can afford a simple style. At first glance, Mustafa’s black-and-white pictures depicting children in an orphanage, the negative effects of the Internet and female alcoholics appear to be simple and plain. But images made with black ink on white paper can be powerful in their clarity.

The initial exhibition was successful. “Some visitors were astonished to meet the creator of the illustrations as they have already known my particular images on the Internet. Some thought the craftsperson was an old man with a beard and a cap on his head but instead they found a young woman. I suppose that the contemporary artists of Kazakhstan rarely spread their paintings on the Internet. At the same time, today we seldom see pictures covering social problems,” said Mustafa in a recent interview with The Astana Times.

Born in the Atyrau region and raised in Almaty, Mustafa went to the local art school accidently. Her father trimmed her hair to make it grow faster and thicker. Her hair caused other children to taunt and ridicule her, so she decided to change school and chose the National Art School.

“My teacher Shaku Temirshotovna was the perfect person for me. She gave me more than just knowledge. She taught me to be kind and persistent. Definitely, I cannot but mention my art educator Agymsaly Duzelkhanov. A prominent and well-known artist, Duzelkhanov gave me very valuable advice that has helped me tremendously throughout my life and career,” Mustafa said.

“Roughly translated, if a child is raised in an environment with drug abuse, a child has the highest risk to become an alcohol and drug abuser. Growing up in such families is certainly traumatic and has serious consequences,” she explained.

Mustafa’s latest exhibition is on view at Gumilyov Eurasian National University. “The Astana police held an event dedicated to the negative impact of alcohol and drug addiction among youngsters this month. I was invited to present my works. To me, it is useful to conduct such preventive work and promote a healthy upbringing,” said the artist.

According to Mustafa, most of her audience is much younger than she is. “I wanted to catch the attention of people sitting in front of the computers who cannot imagine life without gadgets. If teenagers catch a glimpse of my works, it will help them in communication with their parents. An adult will try to devote more time to family than to cell phones. At this time fewer people read books and they can face reality through my drawings,” she added.

It is noteworthy to mention that her artworks have been stolen and copied many times. “I was advised to sue but my ultimate goal is to get the public’s attention and to be heard,” she said. 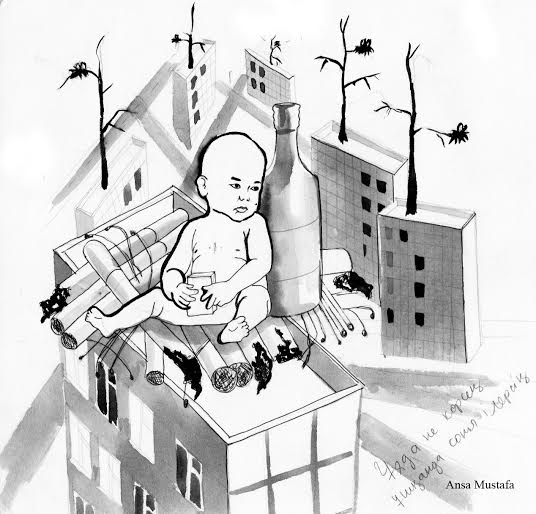 “Once I got an email from a woman who told me a touching story. She knew she was pregnant after a divorce. She was depressed and thought about an abortion. Then she saw my best-known illustration entitled ‘Navernoe moya mama menya ubyet (I think my mom is going to kill me) and threw away all the negative thoughts. Later, she sent me a photo of this beautiful boy and I became his godmother. I am a very sentimental person, I still cry a little for joy whenever I see his photo,” Mustafa said.

Mustafa admitted that painting focused in the studio is not appropriate for her. “Inspirations come from everywhere, from everyday life, from communication with people and from the news. In this way, it becomes a sketch. I post my pictures on social media and discuss them with my followers. Blogging and networking help to unite like-minded communities and get fast feedback on my pictures and activities. Art is my platform to talk about the most pressing issues, teach good things and initiate positive changes. At present, the public is in need of such perspective,” she said.