By Kamila Zhumabayeva in Nation on 24 November 2015

ASTANA – Although volunteering was not a concept familiar to Kazakh people in the past, the majority of individuals interviewed for this story agree the idea of donating one’s time is growing and spreading. However, regulations in terms of ensuring the safety of volunteers in dangerous working conditions and providing motivational support in the form of particular incentives are still greatly needed. 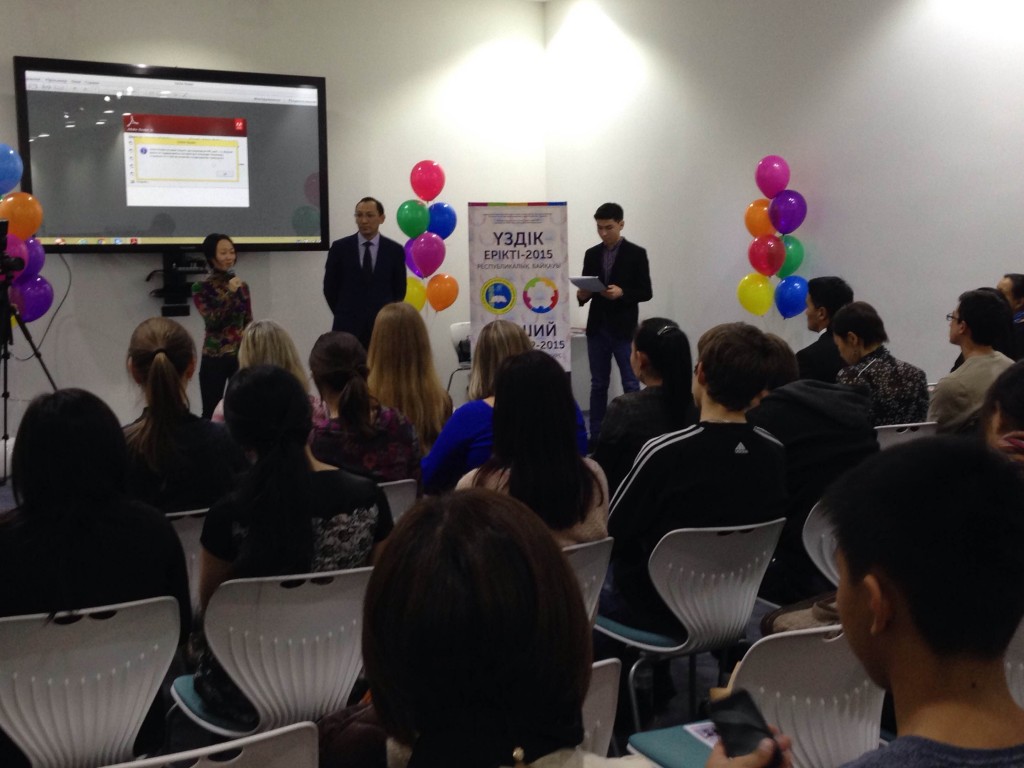 “An involvement of volunteer nongovernmental organisations and money allocated for realisation of socially-significant projects lead volunteering activities in regions of Kazakhstan,” National Volunteer Network Chairperson Vera Kim told The Astana Times. “Funds to develop and support volunteer activities in our country are annually allocated on the national level, on the level of education, science, culture and sports ministries.”

Discussions are being held in the Mazhilis (lower chamber of Parliament) about a law on volunteer activity and the draft released at the end of 2014 is slated for government review this year. Kim is also a member of the working group that attempts to define the role of volunteers, their rights and responsibilities and who should be involved in the activity.

“The large-scale events held in our country lately, like the OSCE (Organisation for Security and Co-operation in Europe) summit, the Asian Winter Games and preparation for the EXPO 2017 exhibition, could not be held without the participation of volunteers,” she said.

Giving one’s time may provide career growth, as volunteering can be a “social lift” for young people looking to be competitive in the market.

“Volunteering incorporates everything in itself and a volunteer is a multipurpose person. So if, for example, a volunteer works with orphanages and children who have disabilities, he or she begins to surf the net for a legislative framework and enlightens him or herself in judicial matters,” added Kim.

A history of volunteering may also help applicants to international universities like Nazarbayev University, although a particular advantage for volunteers is not yet given by most of the country’s educational facilities. The network is in the process of making proposals to the Ministry of Education to allocate grants or minor incentives for volunteers and is gradually attempting to create a motivational field for volunteers to do their jobs more enthusiastically. 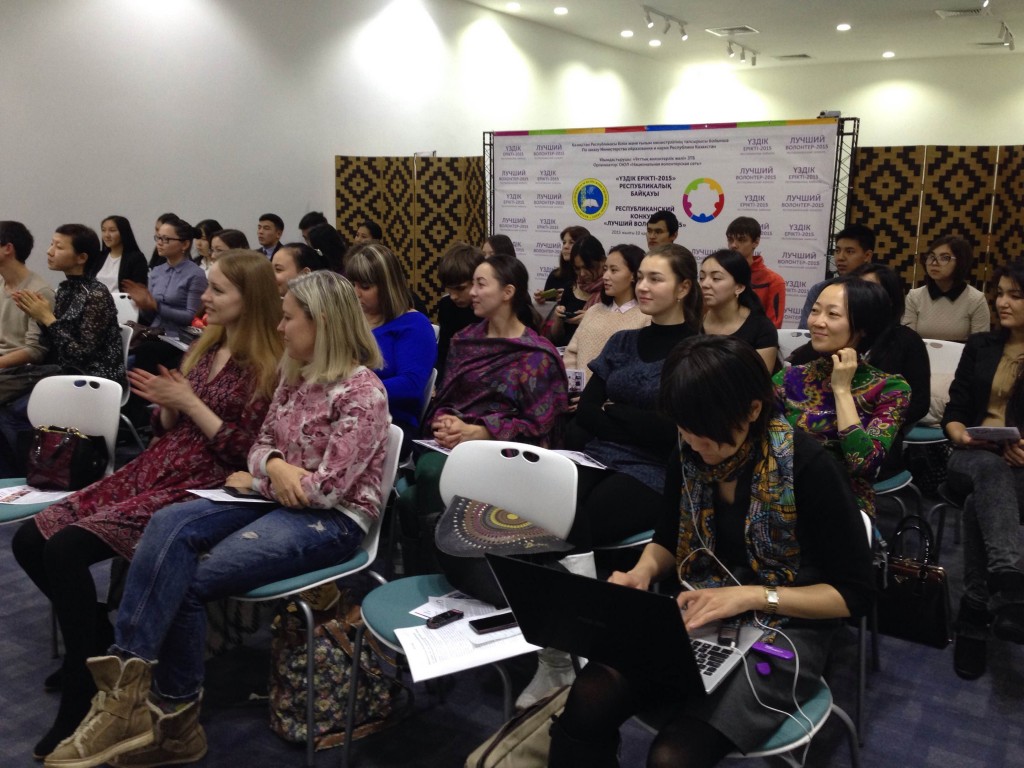 Members of volunteer clubs at the Best Volunteer of 2015 contest in Astana Nov. 10.

“Volunteering saves a lot of money for the economy of Kazakhstan today. Sometimes, volunteers fulfil what the government can’t and would potentially have to spend money on. Therefore, it is important to work out a clear motivational system in order for volunteers to have particular preferences for their labour,” said Kim.

She added that groups should voice their opinions regarding who bears responsibility for the safety insurance of volunteers who donate their time under particularly dangerous circumstances, such as natural disasters.

“If it is an organisation, it should take on the obligations of expenses and training of volunteers to prevent situations of not being psychologically ready to help victims of the disaster, for instance,” said Kim.

The director noted that people in regions should have a clear understanding of who their nearby volunteers are, as it would make situations much easier for organisations working in those particular regions.

She added since volunteer activities are often linked to rendering services in social spheres, including at schools and hospitals, ensuring people who assist in those establishments are adequate and passed certain selection criteria is a must.

“If a volunteer is needed for a special project, an organisation does an announcement about it, makes questionnaires and conducts interviews and a candidate who suits that particular project is selected,” said Shanyrak Volunteering Centre and Temirtau Youth Club head Tatyana Mironyuk.

The youth club has a volunteer database, conducts a survey prior to creating projects and offers individuals the opportunity to participate in their preferred projects.

“Keeping a record of volunteers is necessary. Because we don’t merely conclude an agreement with volunteers, we can’t give an answer on how many of them are in the country,” Kim stressed.

She added it is possible to say how many permanent volunteers there are in each organisation and how many participate in various one-time events, yet an exact figure is unavailable.

Kazakhstan has numerous volunteer centres. The National Volunteering Network includes 14 regions in its base, while Temirtau Youth Club provides services in the city, Karaganda and nearby towns.

“These days, from teenagers to elderly people, new members are joining volunteering centres and clubs across the country,” said Mironyuk. “Sometimes, volunteers are found establishing an interest to help on their own. During some event, they exchange contacts with the centre and begin to work by helping with what interests them the most.”

In the past, people did not have a clear understanding of volunteering and what individuals did, said Kim. They thought volunteers were sectarians (cultists), religious activists, thugs or foreigners to be afraid of.

“When we explained that volunteers are people who voluntarily, consciously and unselfishly do kind deeds for the benefit of the society and people in need, next they asked, ‘why do people volunteer?’” she added.

Karla Nur, founder of 28 Pyetel Club, emphasised that volunteering is especially good for young people, for developing the right attitude towards life is extremely important as they age.

“You are not the only person on this planet to be living selfishly. Just because you came into this world doesn’t mean life revolves only around you. There are other people, too; that is why one should do more good and make him or herself a part of this world,” she said.

Girls in her club knit clothes to support premature babies. Club members such as mayors, female entrepreneurs and students meet, talk, knit and are glad to know that doing what they enjoy helps infants.

The club held a meeting for oncologically ill children and hopes to complete knitting clothes to bring to a hospital.

“When people call and ask whether they can join a club, I tell them, ‘if you came to a meeting or knitted a pair of socks, you are already in our club.’ Help an elderly person to cross the road and you are a volunteer for that instant. It is considered volunteering when you voluntarily do something useful,” noted Nur.

“Any person can be involved in volunteering; a young man of a boundless age . . . his will and free time are important resources,” she explained. “It is not necessary to have supernatural abilities: every willing and free person who wishes to make the life of a small person, a group or a society better can be a volunteer.”

The interviewees say volunteers should also be aware of the job for which they are donating time and the internal benefits it will provide. Rendering a service is a free-of-charge activity and the incentive is not a monetary one.

“A volunteer can be rewarded with a thank you letter, words of gratitude, new friends, a motivational trip for training or conference abroad from an organisation,” said Kim.

“A real volunteer is that person whose activity goes beyond family and friendly relationships. Helping your mother or your friend, for example, is a direct responsibility and not volunteering. The activity is based on free will; no one must coerce a person into volunteering,” she added.