THE HAGUE – The Netherlands confirmed its intention to participate in EXPO 2017 in Astana during a Nov. 19–20 visit to the country by First Deputy Minister of Foreign Affairs of Kazakhstan and Commissioner of EXPO 2017 Rapil Zhoshybayev. Zhoshybayev also met with government and business leaders and attended the opening of Astana Square in Rotterdam. 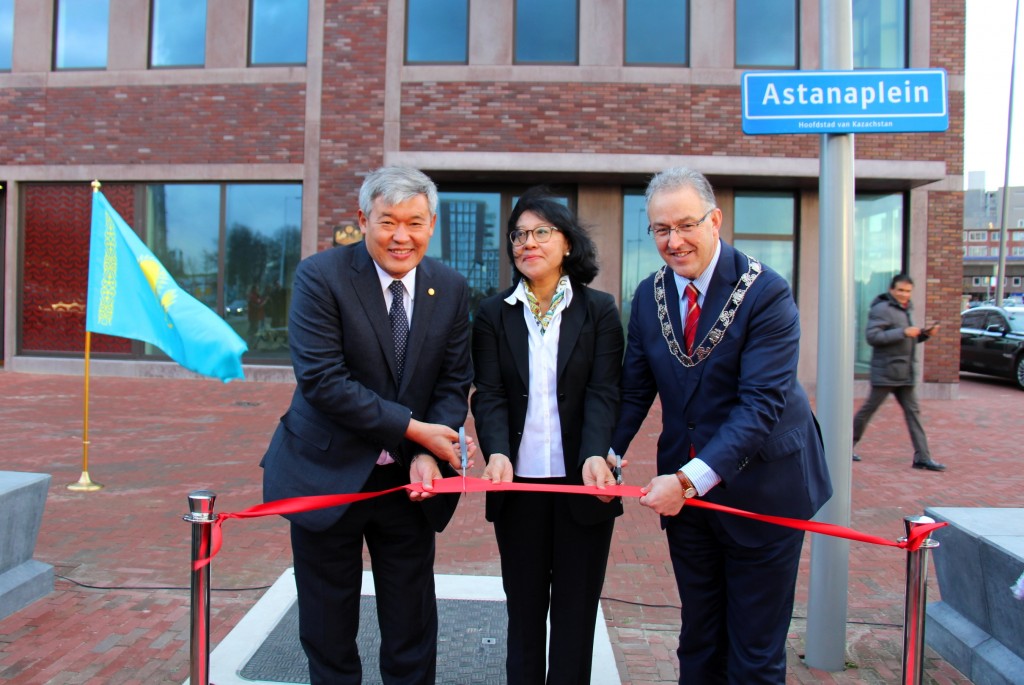 First Deputy Foreign Minister of Kazakhstan Rapil Zhoshybayev at the opening of Astana Square in Rotterdam.

The Netherlands is an important strategic partner for Kazakhstan and the biggest European investor in the Kazakh economy. It is also a global leader in the development and use of renewable and alternative sources of energy, which are among the priority areas of cooperation between the two states. This is particularly important given the Future Energy theme of EXPO 2017.

While in The Hague, Zhoshybayev met the leadership of the Ministry of Foreign Affairs and the Ministry of Economic Affairs of the Netherlands, the Confederation of Netherlands Industry and Employers as well as leading renewable and alternative energy companies. At the meeting with Vice Minister of Foreign Affairs of the Netherlands Guido Landheer, the sides noted the high level of Kazakh-Dutch bilateral collaboration and discussed ways to strengthen relations, including in developing a green economy in Kazakhstan and bringing new technologies to the country. Landheer praised Kazakhstan’s decision to transition to a green economy and assessed its potential highly.

The commissioner said the experience of the Netherlands in developing and using renewable sources of energy is of great relevance for Kazakhstan.

Of special significance for Kazakhstan was the meeting with Director of Media Relations at the VNO-NCW Confederation of Netherlands Industry and Employers Sigrid Verweij, as Dutch companies are widely represented in the Kazakh economy. Among them are Organon, Akzo Nobel, Friesland Central Asia, Royal Dutch Shell, Floodgate Holding and others. Verweij emphasised that the theme of EXPO 2017 is especially interesting for the Netherlands and expressed willingness to encourage Dutch companies to present their projects at the event in Astana. 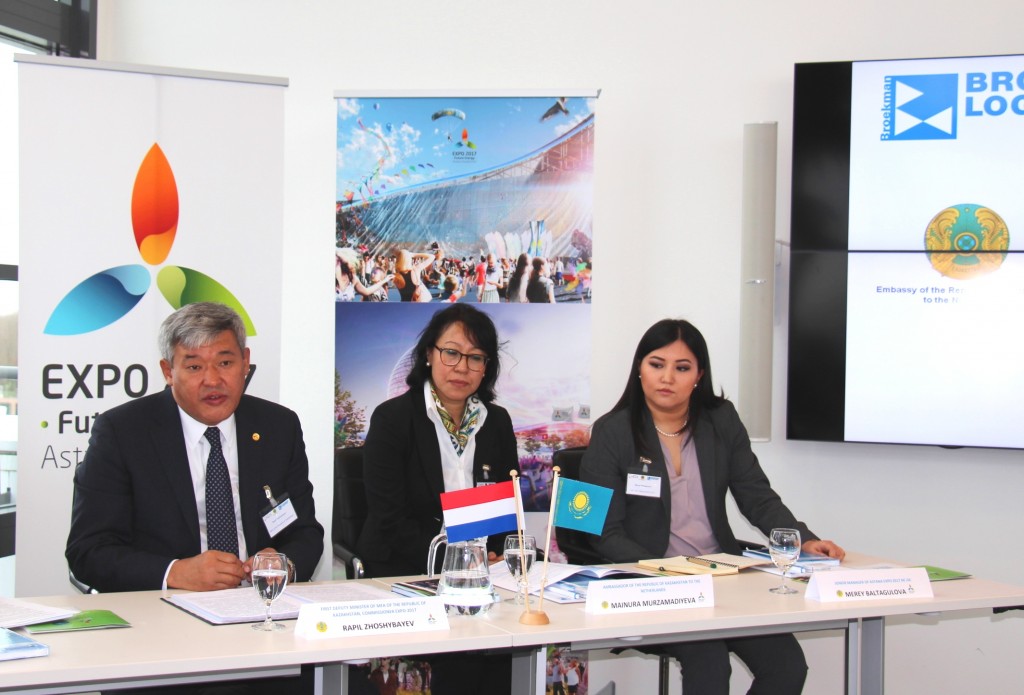 As part of the visit, the Embassy of Kazakhstan organised a “Future Energy EXPO 2017” round table, which was attended by representatives of Dutch companies including Shell, Vitol, van Oord, ING Bank and others. Attendees were briefed on the progress of preparation for the event and discussed in detail opportunities for participation.

Zhoshybayev also met Ahmed Aboutaleb, mayor of Rotterdam, one of the biggest cities in the Netherlands. The mayor called the future energy theme of the Astana expo of great interest for Rotterdam, especially as that city is a candidate to host Expo 2025 with a somewhat similar topic.

The visit’s highlight was the opening ceremony of Astana Square (“Astanaplein” in Dutch) in Rotterdam. The naming had been announced during the official visit of Kazakh President Nursultan Nazarbayev to the Netherlands in March 2014. Dutch politicians, business people, foreign ambassadors, city officials and students studying in the Netherlands as well as representatives of the Kazakh diaspora attended the opening ceremony.

A green energy leader, the Netherlands plans to increase the share of alternative energy in its total energy balance to 16 percent by 2020. Kazakhstan has set the goal of reaching the level of 50 percent by 2050.