By Malika Orazgaliyeva in International on 16 November 2015

ASTANA – President of Kazakhstan Nursultan Nazarbayev visited the Embassy of France in Astana Nov. 16 and left a note in the book of condolences opened after the Paris terror attacks of Nov. 13. 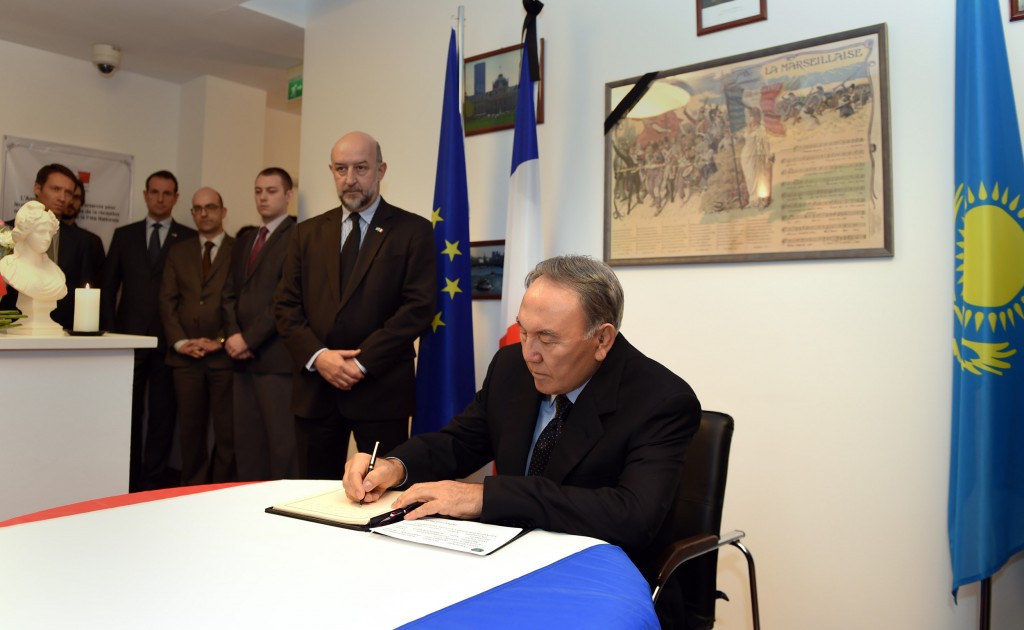 President Nursultan Nazarbayev signs the book of condolences at the French embassy in Astana Nov. 16.

Nazarbayev stressed that he came to express condolences on his behalf and that of the people of Kazakhstan, especially taking into account the close relationship between Kazakhstan and France and noting the respect rendered to the Kazakh delegation during the President’s official visit to Paris on Nov. 5–6.

He noted that a large number of innocent civilians were killed as a result of the inhumane attacks.

“Today, we are mourning with the people of France. This country is one of the centres of world culture and history. Consequently, the situation reflects gravely on us as well. These actions do not only make us feel distress and anger, but also call on all humankind to fight against them. Terrorism has no nationality and religion. This is a global disaster. At the recent session of the United Nations, I proposed to organise a forum called ‘Islam against terrorism,’ as well create a worldwide network to combat this evil,” Nazarbayev said.

On Nov. 14, Nazarbayev sent a telegram of condolences to French President Francois Hollande in connection with the tragedy in Paris.

The Kazakh Ministry of Foreign Affairs (MFA) responded to the tragedy and announced that Kazakhstan strongly condemns the attacks in Paris and finds any manifestation of terrorism unacceptable in a statement on Nov.14.

“We express our deepest condolences to the French people, to the families and loved ones of innocent people killed in the attacks, and wish recovery to the injured,” the MFA statement said.

“Kazakhstan expresses firm support for the efforts of the international community under the auspices of the United Nations in the fight against terrorism and extremism and is convinced that only through the joint efforts of all humanity can we defeat this evil. One of the ways to achieve this goal could be the establishment of a global anti-terrorism network under UN auspices,” the statement also noted.

A series of gun and bomb attacks in Paris in the evening hours of Nov. 13, including at a Cambodian restaurant, a Belgian bar, near the Stade de France stadium where France and Germany were playing a friendly football match and at a concert by an American rock band at the Bataclan concert hall, led to the deaths of more than 130 people and the injury of more than 350 others.

Hollande immediately declared a state of emergency all over France and announced the sealing of French borders to stop the alleged perpetrators, those not eliminated during the hostage rescue operation at the Bataclan, where most of the casualties occurred, from leaving the country.

According to official spokesman of the Kazakh MFA Altai Abibullayev, there were no Kazakh citizens among the victims and injured.