By Malika Rustem in International on 9 November 2015

Kazakh President Nursultan Nazarbayev’s visit to London on Nov. 3-4, resulted in agreements worth more than $5 billion across fields such as energy, pharmaceuticals, aviation and financial consulting. During the visit, the President met with Her Majesty the Queen, Prime Minister David Cameron and business leaders. 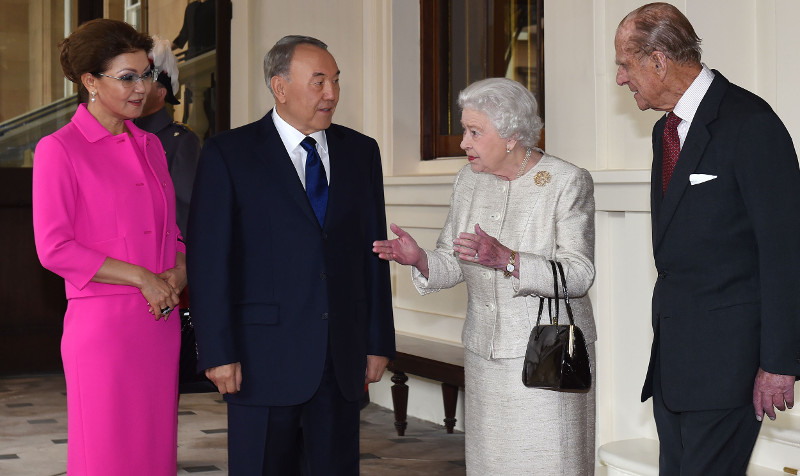 The Kazakh President was greeted by Prime Minister Cameron in front of the prime minister’s official residence at 10 Downing Street and the sides discussed bilateral economic cooperation, the Syrian war, the conflict in Ukraine, the refugee crisis in Europe and Kazakhstan’s progress on political and societal reform, including creating a more permissive environment for nongovernmental organisations (NGOs).

Cameron pointed to deals involving four new gas plants and a steel production facility in Kazakhstan as key components of a widening partnership, suggesting the latter could benefit the U.K.’s own crisis-hit steel industry.

“By bringing together our two diverse economies, broad international cooperation and shared commitment to reform, I believe our relationship can become even stronger,” he told the Kazakh leader.

Nazarbayev said that Cameron’s visit to Kazakhstan in 2013 has given a good impetus to the strategic partnership of the two countries.

He congratulated Cameron on the Conservatives’ victory in the last election.

“You have carte blanche now to carry out completely new policy,” said Nazarbayev. “I hope that in this policy there is going to be some place for Kazakhstan.”

A number of agreements were signed during the meeting, including an agreement between Kazakhstan and the U.K. on mutual legal assistance, a memorandum of understanding between Kazakhstan’s Agency for Civil Service Affairs and Anti-Corruption and the Secretariat of the Cabinet of Ministers of the United Kingdom and an agreement on the participation of the United Kingdom of Great Britain and Northern Ireland in EXPO 2017 in Astana.

In addition, the President of Kazakhstan awarded Cameron with the Order of Dostyk (Friendship) of first degree.

Following the meeting, both sides participated in the opening of the second session of the Kazakh-British Intergovernmental Commission on Trade and Economic Cooperation.

In his speech, the President briefed the gathering on key aspects of modern Kazakhstan’s evolution and current economic policy.

Nazarbayev stressed that Kazakhstan is entering a new stage of economic development, highlighting plans to create an International Financial Centre in Astana.

“We are not begging for anything. What we are asking is just, ‘come over, do business, earn your money together with us.’ We welcome the business and we are creating exceptional conditions for this,” he urged.

On the same day, it was announced that The CityUK, Kazakhstan’s National Bank and the European Bank for Reconstruction and Development (EBRD) also signed a “landmark” memorandum of understanding (MoU). According to The CityUK, the MoU, which covers all aspects of financial and related professional services, sets out for the first time the ways in which the parties will work to assist Kazakhstan’s intentions to develop Astana as an international financial centre.

The Kazakh President also met with CEOs and chairpersons of the world’s leading corporations based in London, including Ben Van Beurden of Shell, Sam Walsh of Rio Tinto,  Said Darwazah of Hikma Pharmaceuticals PLC, Lakshmi Mittal of Arcelor Mittal steel group and Jacob Rothschild of the J. Rothschild Capital Management.

Following the commission and meetings with business leaders, President Nazarbayev briefed journalists on the results of his meetings. According to him, at this stage of development of bilateral relations, the United Kingdom has already invested $12 billion in Kazakhstan and there are more than 500 joint ventures between the companies of the two countries. He also said that the business authorities accompanying him to the visit have signed agreements and memoranda amounting to $5 billion and that the agreements went beyond the commodities sector.

On the first day of the visit, FT.com ran an op-ed by President Nazarbayev, in which he shared his expectations for the visit and vision for areas of common interests with the U.K.

“We have never forgotten that Britain was among the first countries to recognise our independence. We value as well the major role that British companies, big and small, have played in helping modernise our economy and drive our prosperity,” the article reads.

Talking about strong links in areas outside of trade and investment, which unite the two countries, Nazarbayev wrote that Kazakhstan remains “a key ally for the U.K. and other coalition forces in Afghanistan,” and “stands resolutely together in facing down extremism.”

On Nov. 4, Queen Elizabeth II and the Duke of Edinburgh hosted President Nazarbayev and Deputy Prime Minister Dariga Nazarbayeva, who accompanied the President as part of the delegation, for lunch at the Buckingham Palace. He briefed her on the state of bilateral relations and the results of the talks the previous day.