Nauryz Taikazany Monument to be Constructed on Nazarbayev Street in Kazan

A monument representing a huge taikazan, or cup, may be constructed on Nazarbayev Street in Kazan, a large port on the Volga River and the capital of the Republic of Tatarstan in Russia. The Nauryz Taikazany project is the concept of Kazakh architect Askhat Bakirov, reported Tengrinews.kz. 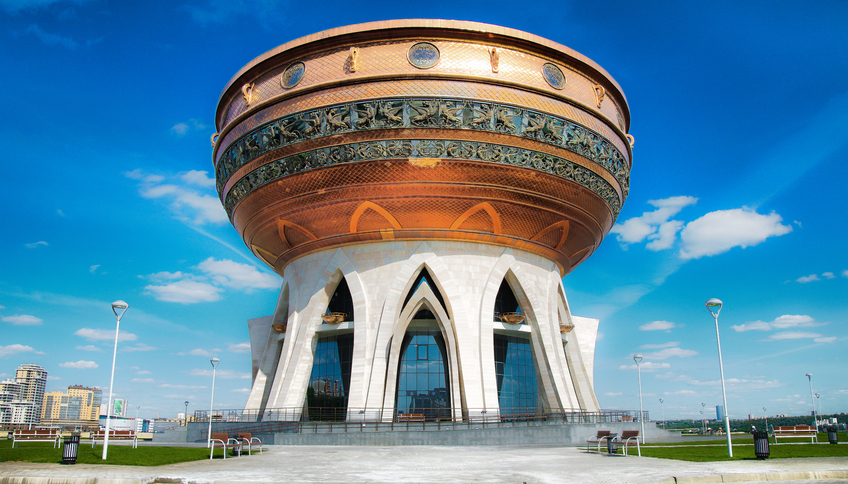 “The idea came to me when I was in Kazan on a working visit. I visited Nazarbayev Street and while there I thought that it could be a good idea to construct something symbolising Kazakhstan. A good example appeared to be the famous and the largest taikazan, made in the 15th century by order of Amir Timur, a Turkic conqueror remembered for his conquests from India and Russia to the Mediterranean Sea,” said Bakirov.

Kazan is a lovely city where the architectural beauty never fails to astonish any visitor, he added. Moreover, its wedding palace is designed in the form of a taikazan.

To date, the idea has been supported by East Kazakhstan region Akim (Governor) Daniyal Akhmetov, Semey Mayor Ermak Salimov and Semey chief architect Kaldybek Kokilanov. The Tatarstan party, represented by the deputy minister of culture, has also backed the initiative.

The taikazan, with a height of 1.6 metres and diameter of slightly more than two metres, has already been constructed.

“We made a copy of the real-size taikazan two years ago. It is made of composite materials, which are used in the production of small architectural forms throughout the world,” said the author of the project.

After its creation, the monument was placed in the central square in Semey as a symbol of Nauryz, the spring holiday celebrating abundance and renewed life on Earth. The cup is expected to be presented to Kazan before next year’s festival. The architect also expressed his plans to re-design the entire alley around the monument.

“This gift expresses our gratitude to the Tatar people for their respect and friendly relations with us,” said Bakirov.

The pedestal for the taikazan will be presented on the East Kazakhstan region’s day of culture, to be held in Kazan next spring. Assembling the stand, a project to be funded by the regional administration, will begin shortly.

Named for the Kazakh President, Nazarbayev Street appeared in June after the head of the Kazakh cultural autonomy in Tatarstan Sagit Dzhaksybazev forwarded an official letter to Kazan city hall. In his correspondence, he noted the mutually-beneficial economic and cultural relations between Kazakhstan and Tatarstan, saying the decision to re-name the street will contribute to the further development of friendly relations between the parties.