In the late 1940s and early 1950s in Almaty and throughout the big Soviet country, yard football (played in areas between residential buildings) was very popular. It was the postwar period, when the country had not fully recovered from the devastating effects of World War II and could not provide youngsters with the special conditions for a “happy childhood.” We had fun with all sorts of children’s games, including, of course, football. There was no problem with football pitches (fields), as we played directly on unpaved streets. At that time, there were few paved streets in Almaty and even fewer cars, so almost nothing disturbed our games.

Our playground was located on Zhambyl Street in the area between Tchaikovsky and Issyk-Kul streets, later renamed Mira (Peace) which now bears the name Zheltoqsan (December). The houses there were built by the Soviet state railway company and were home to our classmates, who with Dias made up our neighborhood team. We mostly played among ourselves, but there were also “away” matches.

I remember two of these matches, one in the courtyard of the houses on Artillery Street (now Kurmangazy Street) inhabited by families of Academy of Sciences employees. The second match was more memorable, as it took place on a real football field at the Veterinary Institute. I remember Omurbek Bekbosynov, who played brilliantly against us and later became a player for Kairat Almaty (Kazakhstan’s top club of the time which played in the top-tier of the Soviet league).

Dias was unquestionably the best player in our neighborhood teams. At the same time he also could act as a coach, defining player’s positions on the field and identifying the good goalkeeper in Lenya (Leonid) Samoylenko. He said to me, “You are a defender; your job is to hit the ball away from the gates. Hit it with your foot, cheek, tip, toe, just out of bounds, but do not let it hit the gates.” 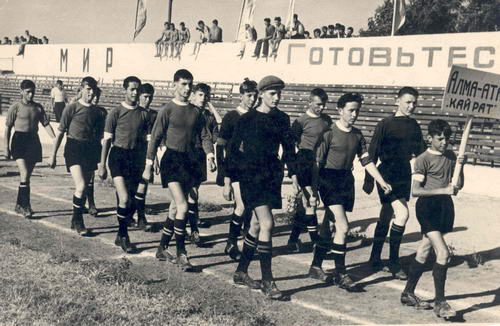 I remember a funny incident when adult guys passing by invited us to play with them. We were led by our captain and pretty quickly scored a few goals, so they got angry. They grabbed the ball and looking at us 10-12 year olds offered a “deal:” either we accepted defeat with a score of 1-10 or they would take our ball. The threat of losing the ball was stronger and we accepted their conditions. They were happy, passed the precious ball and left. We then called this pseudo-team “ten-one” and often laughed, recalling how we humiliated them.

The now famous (or infamous) Russian politician Vladimir Zhirinovsky took part in our games, too, however he did not demonstrate any football talent.

In 1954, youth coaches focused their attention on those playing in courtyards. All the enthusiastic boys were invited to Medik Stadium (later the Kazakh National University Stadium), divided into two teams and asked to play. We truly enjoyed running on the real football field with a real goal with bars and mesh, not two stones. The game was watched by the talented trainer Kozelko (I cannot recall his name and patronymic). Pretty soon, he called Dias and another boy and drafted them into an extracurricular sports section. Later, I found out that the second boy was Timur Segizbayev (a popular Kazakh player of the 1960s). Then, they both went to Dynamo Almaty coach Petrov. I have often been to the stadium and heard a disgruntled Kozelko saying that the best players were simply taken away from him.

At that time, we often went to the Dynamo Almaty games in the namesake stadium. Even then we knew our idols: Denisov, Karetnikov, Kotlyarov, Chen-Iron, Pisarev, Vasin and others. Our favourite movies were “The Goalkeeper,” “The Substitute,” and a few other Soviet hits on sports.

A football life of Almaty had already become a notable phenomenon in the 1960s and through the decision of the Soviet Football Federation, Kairat Almaty was invited to play in the top-tier league of the USSR championship. Both Kozelko selections, Timur Segizbayev and Dias Omarov, were in the line-up. I remember how happy they and other young players were. “We play for our own fun, we are given free uniforms and meals, we travel by airplanes and we are even paid salaries!” they said. 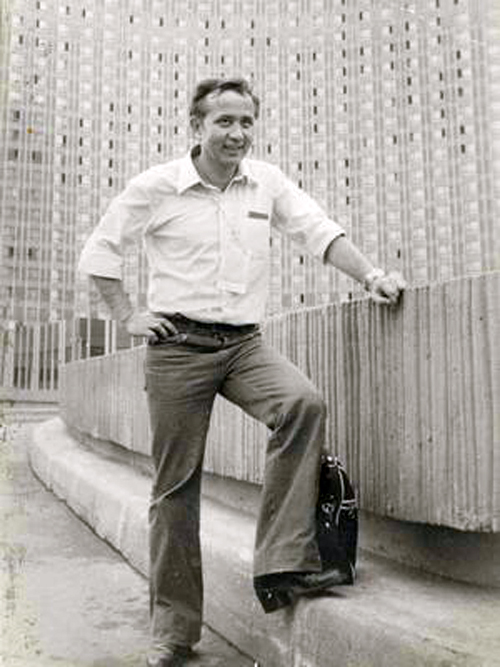 In Kairat’s first season in the Soviet top-tier league, Segizbayev excelled in the 5th or 6th match of the championship, scoring two goals in the away game against Belarus from Minsk. It was the first defeat for Minsk that season and the first victory for Kairat.

Then was the victory in Moscow, Segizbayev scored twice against the Soviet capital’s favourites Spartak, securing Kairat’s first notable victory.

Dias, in turn, scored in Vilnius, hitting the net behind the famous Lithuanian goalkeeper of the day, Jonas Bauza. I lived in Leningrad (St. Petersburg) at the time, working as a mechanic in a factory and attending evening classes at the university. My friends and acquaintances were very happy for me and congratulated me as if it was I who scored the goal. They gave me the Soviet Sport newspaper, where a report had been published about the match in Vilnius.

I was also fortunate enough to witness two of Kairat’s victories over the local favourites, Zenith in Leningrad. In the first match in 1961, Kairat won 2-1 in front of a 100,000-strong audience. After the match, residents of the city approached our players on Nevsky Prospect (St. Petersburg’s main street) with kind smiles and congratulated them on their victory. The second match ended with the score 2-0 in favour of Kairat. My Leningrad friends shared the joy of the victory with me.

I remember very well the impression the stunning architecture of what is undoubtedly one of the most beautiful cities in the world made on the Kairat players. One of the players, Stanislav Kaminski, who walked for hours in Leningrad, said, “I cannot stop looking at this beauty.” They were intelligent guys – Oleg Vodopyanov, Bulat Ishchanov, Segizbayev, Robert Antoryan and Vladimir Kiselev. They knew classical music well and many even murmured tunes from Mozart, Beethoven and Tchaikovsky.

Somewhat later, Dias “rescued” a match in Almaty against Ararat Yerevan. With the score 1-2 in favour of the Armenian guests, he equalised the game by hitting the Ararat goal with a header, even though he was not the tallest player in the penalty area.

In 1965, Dias began working as a sports journalist on Kazakh television and radio. In the course of his work, he met and befriended many of TV’s best pundits. Among them were famous Soviet TV anchors including Nikolai Ozerov, Vladimir Maslachenko, Kote Makharadze. Tengiz Sulkhanishvili and many others. Dias led the coverage of all Kairat matches and the matches of the World and European Championships. In 1980, he commented on the field hockey tournament matches at the Moscow Olympics.

Former Kairat players sometimes met in our house and they knew our mother well. Antoryan, who often visited our house, enjoyed special favours. Kaminski, who later worked as a coach in Barnaul, admitted that the main thing in his life was Kairat and his real friends were the Kairat players.

The team drew big crowds and brought much joy to the fans, among whom was our father. Once in a meeting, when our forward failed to hit the target a few metres from the gate, he cried out, “There, even Bulebai wouldn’t have missed.” Bulebai Issabekov, our neighbour, a close family friend and my dad’s colleague, was very plump and lived an existence very far from sports.

Dias has remained faithful to football. Despite his age, he participates in tournaments among veterans and recently won a bronze medal in the veterans’ world championship in Brisbane, Australia.
Keep it up, brother!