The Moscow House of Veterans of Wars and Armed Forces recently held “The Binding Time Thread,” a literary and musical evening dedicated to the 170th anniversary of the birth of Kazakh poet, composer and philosopher Abai Qunanbayuli and the 200th anniversary of the birth of Russian Romantic writer, poet and painter Michael Lermontov, reported the press service of the Kazakh Ministry of Foreign Affairs. 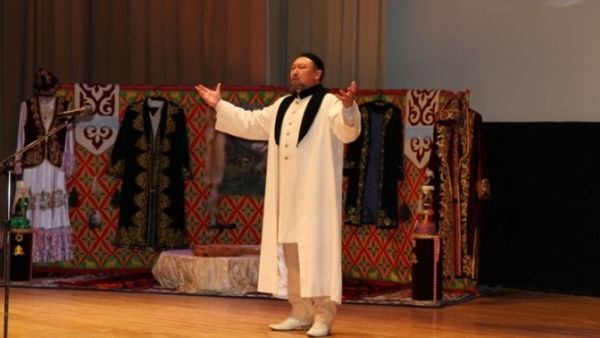 The festivities were opened by the Minister-Counselor of the Kazakh Embassy in Russia Viktor Temirbayev. He quoted Kazakh writer Mukhtar Auezov, telling the audience about the deep spiritual connection between the two great men of their time.

“Abai used to translate Lermontov’s poems with great care and great love. ‘The Dagger,’ ‘I go out on the road alone,’ ‘The Gifts of the Terek River,’ ‘The Sail’ and excerpts from ‘The Demon’ are a few poems to mention, in which the translation is above all others implemented in the Kazakh language,” said the Kazakh diplomat, citing Auezov.

Temirbayev drew attention to the fact that denoting 2015 as the Year of Literature in Russia marked a significant expansion of literary contacts between the two countries and the organised event is one of the milestones in the sphere of cultural and humanitarian cooperation.

Merited Artist of Kazakhstan and director of the Mukhtar Auezov Kazakh State Academic Drama Theatre Erlan Bilal noted the importance of such celebrations, especially for those who love Kazakh poetry, among them Kazakh compatriots living abroad.

“Today, the audience enjoyed a theatrical incarnation of the great works of Abai and Mikhail Lermontov. In my opinion, it provides a deeper understanding of the highest level of their poetry. Of course, many people have read poems of these two great poets; however, for the younger generation it is more interesting to learn poetry in a form of a theatrical performance, feeling the emotions of the actors,” he said.

People’s Artist of Kazakhstan and Professor of Arts Tlektes Meiramov appreciated the great interest the Russian public had in Abai’s legacy and expressed hope the tradition of holding cultural events with the participation of Kazakh artists will continue.

“I think cultural events like this are necessary not only to bring the great heritage of Kazakh culture to the Russian audience, but also to trigger greater convergence between Kazakh and Russian cultures,” said Meiramov.

The evening was attended by veterans of the Great Patriotic War and representatives of the Commonwealth of Independent States (CIS) country embassies accredited in Russia, as well as honorable Kazakh guests, university and school students.

The event was organised by the Kazakh National Cultural Autonomy in Moscow and the Memory, two non-governmental organisations and supported by the Kazakh Embassy in Russia.