Kazakhstan’s pavilion was ranked in the best three for opening theme and content, it was announced at the closing ceremony for EXPO 2015 in Milan Oct. 31, the press service of the Astana EXPO 2017 National Company reported. 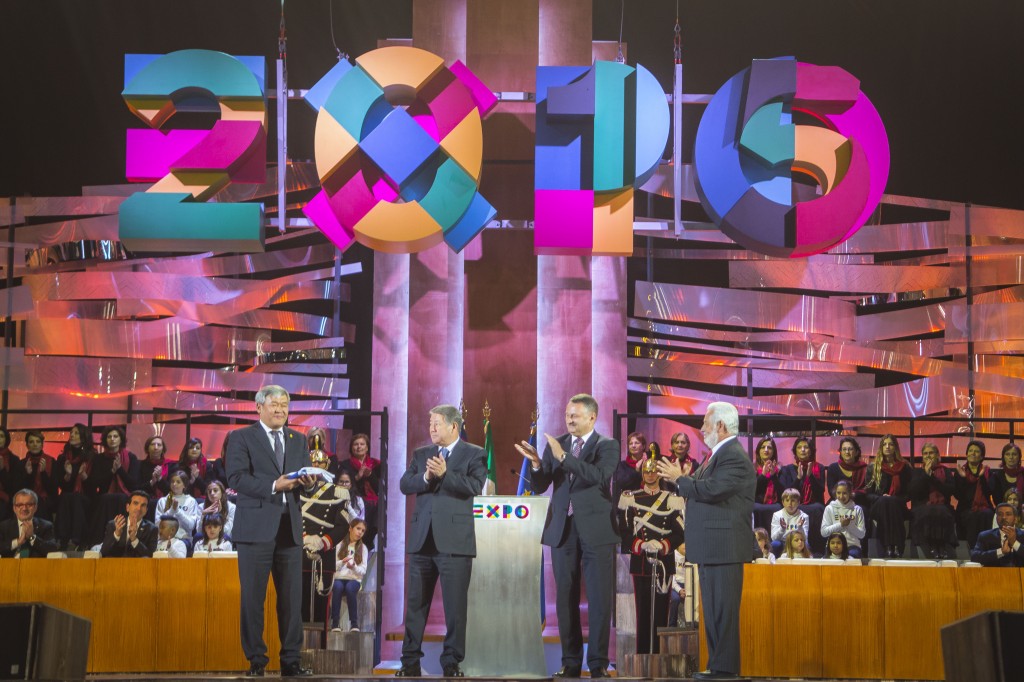 “EXPO Milano 2015 is considered a big boost for the future success of EXPO 2017 in Astana. The Kazakh pavilion, without false modesty, has become a triumph of the Italian exhibition. Our pavilion is very organic and is the essence of national traditions and modern development of the country,” said Rapil Zhoshybayev, commissioner of EXPO 2017 and first deputy minister of foreign affairs of Kazakhstan.

The Kazakh pavilion at EXPO 2015, with the theme, “Feeding the Planet. Energy for Life,” was very popular among visitors. Every day about 5,000 people visited the pavilion, the expo statistics said. Another motif of the Kazakh pavilion, held in a two-storey, 3,000 square metre building, was “Kazakhstan, land of opportunity.”

The design of the pavilion evoked ears of wheat, one of the main agricultural crops of the country. Inside the pavilion were six zones devoted to agriculture, livestock, aquaculture, environment and amazing facts about Kazakhstan. The exposition used interactive and multimedia technologies to engage visitors.

During the official closing ceremony, Chairman of the Astana EXPO 2017 Company Akhmetzhan Yessimov and Zhoshybayev received the flag of the International Bureau of Expositions (BIE) from BIE Secretary General Vicente Gonzalez Loscertales and Commissioner General of EXPO 2015 Bruno Pasquino.

“This is a very serious and responsible step for Kazakhstan. The expo has become a national project of the country for the next two years. Our country has become the author of several global initiatives. And we are confident in its success,” stressed Zhoshybayev.

Referring to the theme of EXPO 2017, “Future Energy,” Zhoshybayev said it “expresses the international community’s concern about the energy that’s having a growing impact on the planet.”
“This theme is very current and in line with global economic processes. Over the past several decades, most crises have begun over energy,” he said.

The main theme of the expo is divided to sub-themes: “Reduction of CO2 emissions,” “Energy-efficient lifestyles” and “Energy for all.”

EXPO 2017 in Astana will run from June 10 to Sept. 10, 2017. More than 100 countries are expected to take part and 51 have already confirmed their participation, as have 11 international organisations, including the Organisation for Economic Cooperation and Development (OECD), the International Atomic Energy Agency (IAEA), the World Bank, the Energy Charter Treaty, the European Commission, Sustainable Energy for All, the International Renewable Energy Agency (IRENA) and a number of UN agencies. Twenty-five commissioners from various countries and international organisations have been appointed.

The total area of the EXPO 2017 complex is 174 hectares and 38 facilities are planned to be built within it. The exhibition area will house the National Pavilion of Kazakhstan; international, thematic and corporate pavilions; and shopping and entertainment facilities. A conference centre, press centre, houses and hotels are planned for outer zones. All objects will be put into operation in September 2016.

“We have already started projects to develop infrastructure and logistics, which involve building new road thoroughfares. In particular, in Astana, we are planning for high-speed buses, intelligent transportation systems, an upgraded railway station, an airport expansion, the introduction of new lines of air communication, a full transition to international quality standards and construction of a number of social facilities, hotels and business centres meeting international standards,” said Zhoshybayev.

During the visit, EXPO 2017 organisers met the commissioners of the national sections of the United Arab Emirates, Senegal, Sierra Leone and Gabon. At the meeting, Zhoshybayev commented that the Milan expo would be a boost to EXPO 2017. “Holding the EXPO in Astana will create a trio of historically important events for Kazakhstan [that year], along with the 25th anniversary of Kazakhstan’s independence and the 20th anniversary of the capital city Astana.”

Following the meeting, the sides signed agreements to participate in EXPO 2017. According to BIE regulations, the contracts spell out the conditions of participation and operation of the country’s pavilions and the rights and obligations of the parties to be observed during the expo.