By Kamila Zhumabayeva in Astana on 2 November 2015

ASTANA – Live music should be “tasty,” says one the city’s most loved, versatile musicians. Numerous creative live bands and solo performers enjoy playing and singing both what they like and what their audiences like at the capital’s most lively venues, such as Line Brew, Gentry Pub, Irish Pub and Corner 57. 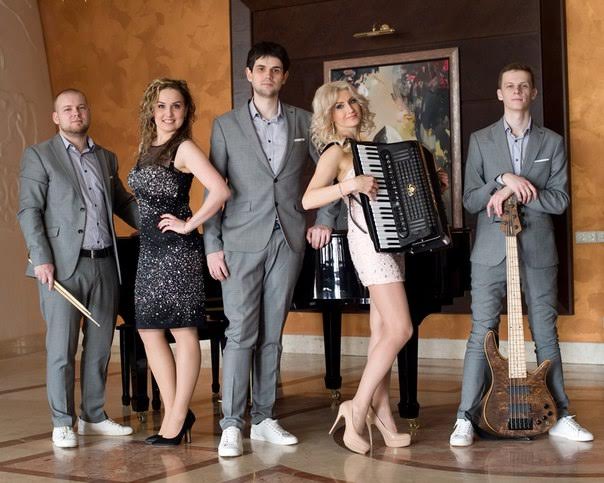 The Astana-based Rodina Band, with two singers, a bass guitarist, keyboard pianist, drummer and accordion player, can perform and mix almost any genre, artist and period from Abba and the 1980s to today’s world hits and Kazakh songs. The group makes its own accordion covers for songs and once surprised its audience by playing Pink Floyd’s “The Wall” with a very rare, old and heavy (16 kilogrammes) musical instrument.

The band also performs the locally well-known Kazakh song “Kyzyl Orik,” which gives them an opportunity to obtain wider recognition. Their colourful retro style and professional music videos can be seen on YouTube.

“While we perform with vocals and instruments, we can play rock music in lounge and soul genres and jazz music in another style. Musicians should be able to experiment and amuse. They also should be able to sell and perform any kind of music if you consider yourself a musician,” Rodina Band manager, founder and accordion player Tatyana Rodina told The Astana Times.

“When I play sad and dramatic music, I relive my memories and feel relieved. Sometimes I will be crying when I perform, which I think I can allow myself as a woman and an artist. People don’t notice that and pay attention because they relive their own moments while listening to it. I feel how the room becomes quieter and people are lost in their thoughts, which means I managed to reach them,” she said.

In addition to performing, Rodina does all the band’s organisational duties, including phone calls, meetings, advertising, costumes and even technical support.

“The band won’t last long if all those matters are not handled. You cannot live only by art. Everyone wants to be able to take care of their children financially and have a car or an apartment, so you should be able to do everything to provide. If I ever meet anyone who could take those responsibilities for me I will pass it on and pay, but as yet I don’t see the person who could do it better than me,” she said. 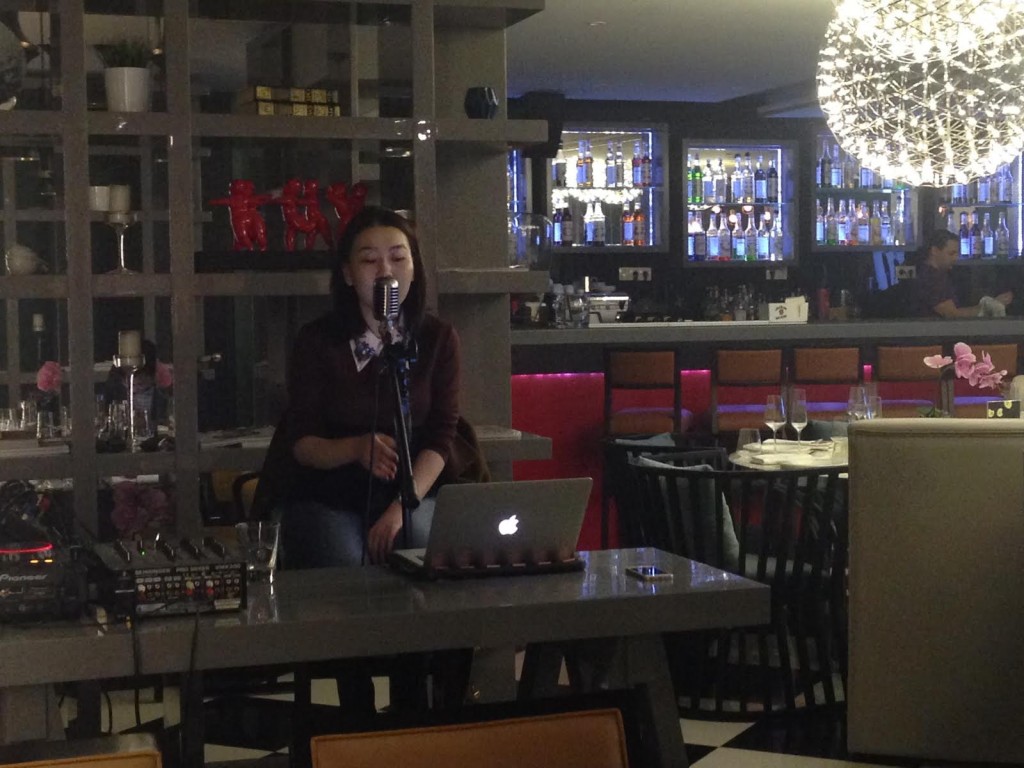 For Rodina, managing and performing with the band is her main job and a hobby she enjoys.

“I have a degree in Management and Economics, but the accordion brings me joy; my life always gains different colours and allows me to live in a festive atmosphere. I can’t sit in a boring office because I’m very communicative and alive. I like to constantly meet and communicate with new musicians at different events. My profession has allowed me to witness and work with outstanding Russian music personalities such as Valeria, Nikolai Baskov and Igor Butman, which office work could never allow,” she said.

Rodina is also the mother of a small daughter who she raises along with doing her multifaceted job.

“Most importantly, I should be a mother first, so if my daughter needs attention and care I leave everything I am doing at the time, sometimes for one month. I sit and look after her the whole day while still performing during evenings,” noted the musician.

Stepan Berezin is a manager and a member of CityLove, a band which also includes front man Serik Kurmangozhin, lead and solo guitarist Alexander Trifonov and second vocalist and rhythm guitarist Mikhail Lapshin.

Kurmangozhin composes songs in Russian, English and Kazakh. He and Lapshin perform clearly in English, as if they were native Americans or Britons or lived in one of those countries. The listener will not sense the thick accents that almost all Commonwealth of Independent States (CIS) nationals have when they speak English.

“I never lived in America or Britain, but I do have love for and interest in the English language to which I tied my life, movies and culture. I pay attention to the meaning and read literature in English, that is it,” said Kurmangozhin.

The band mostly performs cover compositions in English, as members were unable to earn a living merely playing original works. Those who had other jobs, however, gradually found music provided them with an income equal to the average Astana resident. Berezin still works in the medical field.

“This is our price for performing artistic material. This is not to say we are surviving, we are living down to earth. We perform in places people listen and like. It’s important that we can play what we want. Playing at the Irish Pub in the Rixos Hotel for a year and a half gave us opportunities to meet people,” noted Berezin.

The band performed in Almaty’s Hard Rock Café, opening in front of a nearly 5,000-person audience.

“We go in a direction where artistic material displaces covers which are also in our format. We perform them the way we feel at that moment, sometimes even unrecognisably changing the song. People do not notice that because we choose non-mainstream music. Even if it is Justin Timberlake, it will sound completely different as we always do mixing,” said Kurmangozhin. 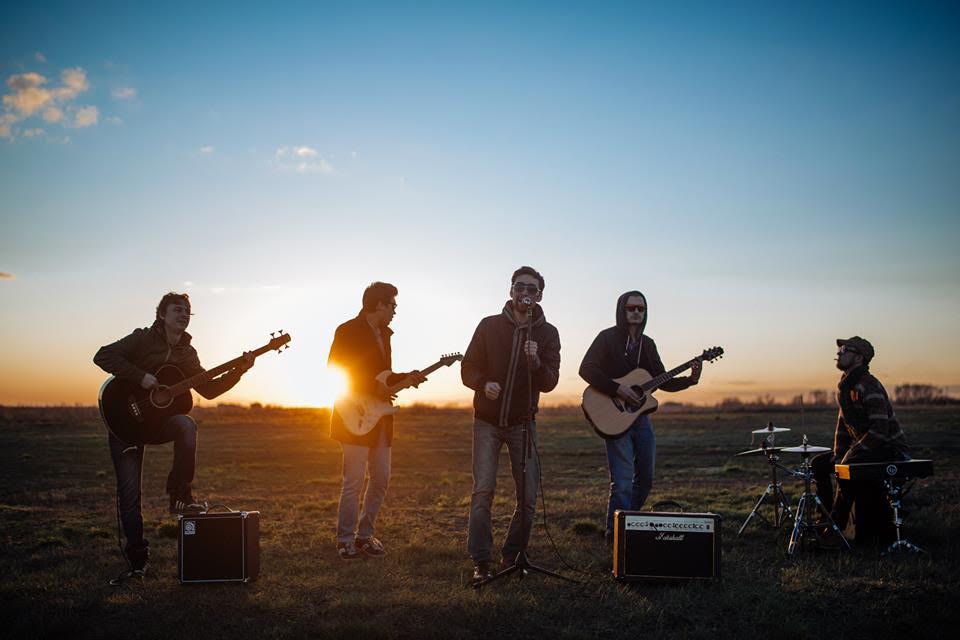 “We do not like to perform what has just been released and everyone is rushing to play. We never play music that is at odds with what is really close to our souls; it does not matter whether it is a hit or not,” he said.

The artists and bands on which band members were raised and like vary and include Gary Barlow, Keith Urban, John Meyer, Pink Floyd, Coldplay and Amy Winehouse. The Kazakh audience is not used to the music, but their listeners are mostly VIPs, foreigners and young people who studied abroad. They are often tired of typical Kazakh songs and applaud the different sound.

Igor Nartov, a saxophonist who has been playing at Gentry Pub for about two months, performs as a part-time job.

“My job brings me joy and I get paid. It is not about making songs to earn more money. I am enthusiastic, which means if I like it, I will play it,” he said.

The musician added that he feels stage and commercial music should always be updated.

“I believe every musician should have classic music like that of George Michael in his repertoire. I focus on the music that people like now and which I also like, too. Almost everyone likes top-50 types but they don’t last long. I always have to add something new to my performances, because the audience in Gentry Pub expects something new so I cannot afford not to give it to them. Music does not have a boundary, you have to keep developing,” he noted.

Nartov rehearses constantly to grow as a saxophonist. He stressed people often underestimate the time and effort of live musicians, comparing their occupation and hours to office workers. Live musicians, however, cannot play hours at a time without breaks.

“For me, even a small spot in the corner of Gentry Pub is a stage where I know I have to give my best effort. I often try to revive and modernise songs that have not been played for some time,” he said.

The saxophonist’s main styles are jazz, classic, pop and funk. His music is modern, oriented toward club music and targeted to young people.

“Sometimes older generations do not like it, but listeners come anyway to thank me personally for great evenings at the pub,” he added.

Zhamilya Aidarbayeva has a music education, but singing is more of a hobby and secondary job because she enjoys it and is not looking to earn money from performing. She chooses songs herself, mostly from the lounge genre due to her soft voice. She sings popular songs in lounge style and acoustics.

“I prefer jazz, alternative rock and indie rock like Coldplay, Benjamin Leftwic and Norah Jones. Popular songs I can sing are Justin Bieber and Selena Gomez without bass beats, but guitar and piano. I only perform in Corner 57,” she said. “We have musicians, but we don’t have fans. We have many musicians who perform and create live bands, but we lack variety of styles in music. It’s mainly dance and pop, while the genres that I like are very rare in Kazakhstan.”

Aidarbayeva composes songs for herself and keeps them in her laptop. She does not release them, because she believes the public is not ready to accept such music.

Audiences including guests from both Kazakhstan and foreign countries come to Astana to listen and enjoy the city’s Rodina Band, CityLove and solo performers such as Nartov and Aidarbayeva. They have heard them before and enjoy hearing them again.