By Malika Orazgaliyeva in Business on 26 November 2015

ASTANA – Kazakh Foreign Minister Erlan Idrissov took part in the third Summit of Gas Exporting Countries Forum (GECF), held Nov. 23 in Tehran, stressing that Kazakhstan is willing to supply up to 3 billion cubic metres of natural gas annually through a proposed pipeline from Turkmenistan to India. 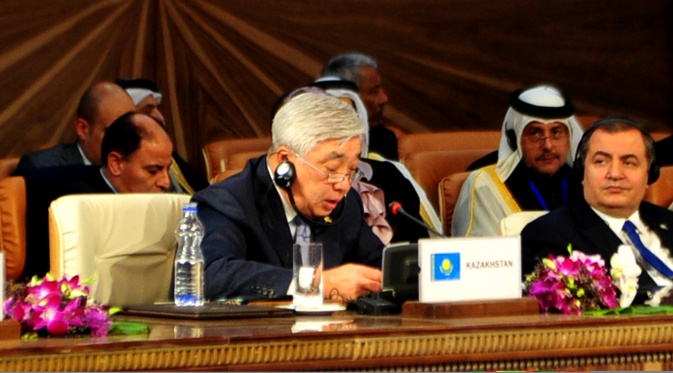 The participants discussed the prospects of gas industry development and the benefits of using it as an alternative energy source. Issues were also raised concerning ecology, dynamics and balance in the gas energy market, gas industry expansion, pricing, coordination among forum member states, investments and optimising gas consumption.

Kazakhstan is currently in 18th place globally and third among the Commonwealth of Independent States (CIS) countries in terms of proven recoverable gas reserves, with more than 6 -7 trillion cubic metres.

“Kazakhstan remains a reliable partner in stabilising the world energy market and is interested in mutually beneficial cooperation and substantive dialogue. As the largest economy in Central Asia, Kazakhstan is interested in further economic development in this region in the fields of energy, infrastructure and industry development.

In addition to plans to increase natural gas production, Kazakhstan is actively developing its production and export of liquefied natural gas.

He noted the nation is actively cooperating with its neighbours and partners for gas transit, including Russia, Turkmenistan and Uzbekistan. International gas transit through Kazakh territory has amounted to more than 65 billion cubic metres this year, he added.

In this context, he stressed Kazakhstan is interested in the main TAPI gas pipeline from Turkmenistan to Afghanistan, Pakistan and India whenever it is built.

“Discussions are currently taking place with the Indian side about the possibility of increasing the capacity of the pipeline, taking into account the potential gas supplies from Kazakhstan. Our country is ready to transport up to 3 billion cubic metres annually through this pipeline,” he said.

The minister also spoke about Nurly Zhol, an ambitious government programme to develop the country’s infrastructure, which, among other areas, will focus on gas exploration.

“We will continue to play an active role in establishing and transporting the main gas stream between Europe and Asia, North and South, while remaining a reliable partner for everyone involved in the gas industry,” he said.

The GECF consists of 18 main and observer members with its permanent secretariat positioned in Doha, Qatar. Previous summits were held in Doha in 2011 and Moscow in 2013 with the purpose of developing mutual understanding and dialogue between leading gas producers, consumers and governments on global gas policy issues, according to the forum’s website.