By Michelle Witte in Nation on 2 November 2015

ASTANA – The surge of popularity of social media in Kazakhstan, and the corresponding ability to post anonymously online is having an impact on both high and low-profile citizens in the country. In particular, lately, the children of high officials have found themselves in hot water due to being caught on video – on the other hand, people who previously might have struggled to be heard are using social media to voice their grievances. 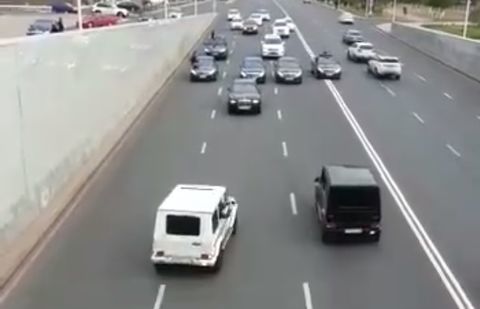 One of the images circulated on social media of traffic violations during the wedding celebration of the son of former Deputy Chairman of the Administrative Police Committee of Kazakhstan’s Ministry of Internal Affairs Bakhytzhan Baltash.

Most recently, at the end of September, reports emerged in Astana of a wedding convoy driving cars backward and the wrong way down one of the capital’s main streets for 21 minutes, with footage taken by outraged motorists. According to a Tengrinews report, the drivers were fined nearly half a million tenge (about US$1,793), and four of the nine drivers will lose their licenses. As it turned out, the marriage being celebrated was of the son of Deputy Chairman of the Administrative Police Committee of Kazakhstan’s Ministry of Internal Affairs Bakhytzhan Baltash, who was dismissed from his post after the scandal.

Prior to that, the son of Bolat Turakeldiyev, who was employed by the office of Kazakhstan’s prime minister, was caught on tape in a shocking physical altercation with a female clerk at one of Astana’s movie theatres, the footage of which was widely shared on social media in Kazakhstan. Following his son’s arrest, Turakeldiyev resigned. In another Tengrinews report, Turakeldiev’s lawyer, Askar Usenbayev, said, “Yes, he is the son of Bolat Turakeldiyev. As you know, the father is not responsible for the son. However, being aware of the public’s attention to this case, on the basis of their moral and ethical considerations, he has now filed his resignation, as I learned.”

In August, Astana saw the culmination of a sensational scandal and trial involving well-known local businessman Kairat Zhamaliyev, who was sentenced to 13 years in prison for a vicious April attack on a romantic rival. The story spread through the city within days following the attack, but it is widely believed that police and other authorities were only pressured to take harsh action against the high-profile suspect – Zhamaliyev owned a hotel, restaurants and other entertainment facilities in Astana, – because of the public outcry after the father of the victim posted graphic photos of his son’s injuries to Facebook. In April, the case was taken under the personal control of the Attorney General and the Minister of Internal Affairs.

Rather than fearing Internet exposure, less-priviledged citizens are using social media to draw attention to their problems and having some success. In Almaty, as reported by EurasiaNet and other sources, frustrated mother Ainura Seitakyn posted photos of rundown facilities and dirty toilets and rooms at the Almaty Children’s Clinical Hospital for Infectious Diseases to her Facebook page – only to see them shared as far as the office of the new mayor, Baurzhan Baibek, who took office in August. Baibek visited the hospital personally on Sept. 17 after seeing the photos – and went on to sack the chief doctor and two members of the senior staff, saying that he could see through the superficial repairs they’d enacted in preparation for his visit and that the senior staff must be responsible for the state of the hospital as a whole.

In early September, the Almaty Akimat (city administration) went a step further, taking the social media reins into their own hands and creating an Instagram account that allows citizens to post photos of municipal problems. So far, thousands of residents have followed the account and open sewers, garbage and dilapidated bus stops have been caught on camera, put online and dealt with, this newspaper reported last month.