By Malika Orazgaliyeva in International on 23 November 2015

ASTANA – Kazakh President Nursultan Nazarbayev met Nov. 20 with Afghan President Mohammad Ashraf Ghani when the latter paid his first official visit to Astana. The heads of state discussed the main directions of bilateral cooperation, including trade and economy, transit and transport, agriculture and cultural and humanitarian collaboration, as well as exchanged views on current international issues. 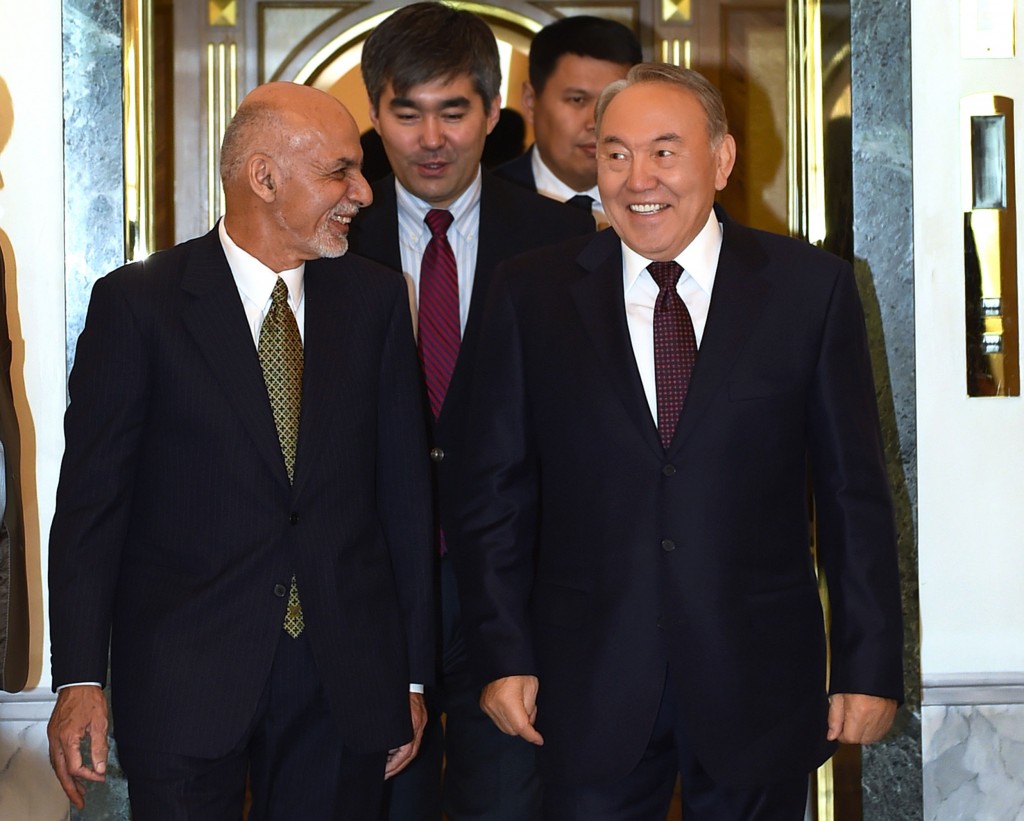 Diplomatic relations between Kazakhstan and Afghanistan were established Feb. 12, 1992. The visit was held at Nazarbayev’s invitation and he welcomed his colleague to the nation.

“For a long period of time, the Central Asian region and Afghanistan have had common, rich historical and cultural values. I know about all the events that take place in your country. We used to work together a lot with the previous president, Hamid Karzai. Kazakhstan provides all kinds of support to Afghanistan in order to help keep the situation in the country stable. We want to establish close relations with a prosperous Afghanistan,” he said prior to the talks at the Akorda presidential residence.

Nazarbayev stressed the Kazakh government understands the difficulties and risks faced by Afghanistan.

“We are glad that in recent years we were able to observe a process of stabilisation. You aimed to unite all people together and establish the government of national unity. It is important and we support this intention,” he said.

During the talks, the sides noted the priority theme was activation of trade and economic cooperation between the two countries, especially considering the volume of mutual trade turnover, which is now at the annual level of $400 million.

Following the talks, Nazarbayev noted that agreements were signed providing for the supply of more than 600,000 tonnes of Kazakh grain to Afghanistan, as well as on assistance in constructing roads and providing building materials, locomotives and wagons. Since 2002, Kazakhstan has delivered $20 million in primary goods as assistance to Afghanistan, transferred financial assets for strengthening the activities of law enforcement bodies and spent $50 million for university training of 1,000 Afghan students in Kazakhstan.

“We will continue to render assistance to Afghanistan,” he added.

Nazarbayev drew attention to the fact that Afghanistan is rich in mineral resources, noting that Kazakhstan has specialists able to help the country in geological exploration.

He added that the sides discussed issues of cooperation between the two countries in the sphere of combatting terrorism. The Afghan President noted both countries will make joint efforts to fight illegal drug trafficking and terrorism. The delegations emphasised similar interests in terms of interaction within international structures.

Ghani noted Afghanistan intends to develop cooperation with Kazakhstan and Central Asian countries in general, adding “Kazakhstan’s way” serves as an example for Afghanistan in terms of strengthening stability and developing the economy. He also thanked Kazakhstan for its help in liquidating the consequences of natural disasters in his country.

Commenting on the meeting, Kazakh Foreign Minister Erlan Idrissov stated: “Increasing cooperation with Afghanistan is important to Kazakhstan. We strongly believe that regional cooperation is key to a more stable and prosperous Afghanistan. The talks held in Astana are an important step toward this objective.”

According to a press release from the Kazakh Ministry of Foreign Affairs, he further added: “Kazakhstan will continue to support Afghanistan through humanitarian and financial assistance to facilitate the country’s economic rehabilitation and political stability.”