ASTANA – It was a visit full of symbolism. It ranged from the presentation of the famous savoury and fragrant Almaty Aport apples to a foreign dignitary who was kind enough to recently say that apples are from Kazakhstan to that dignitary’s following in the footsteps of world leaders to deliver a Central Asia policy-setting lecture at the country’s newest flagship university. 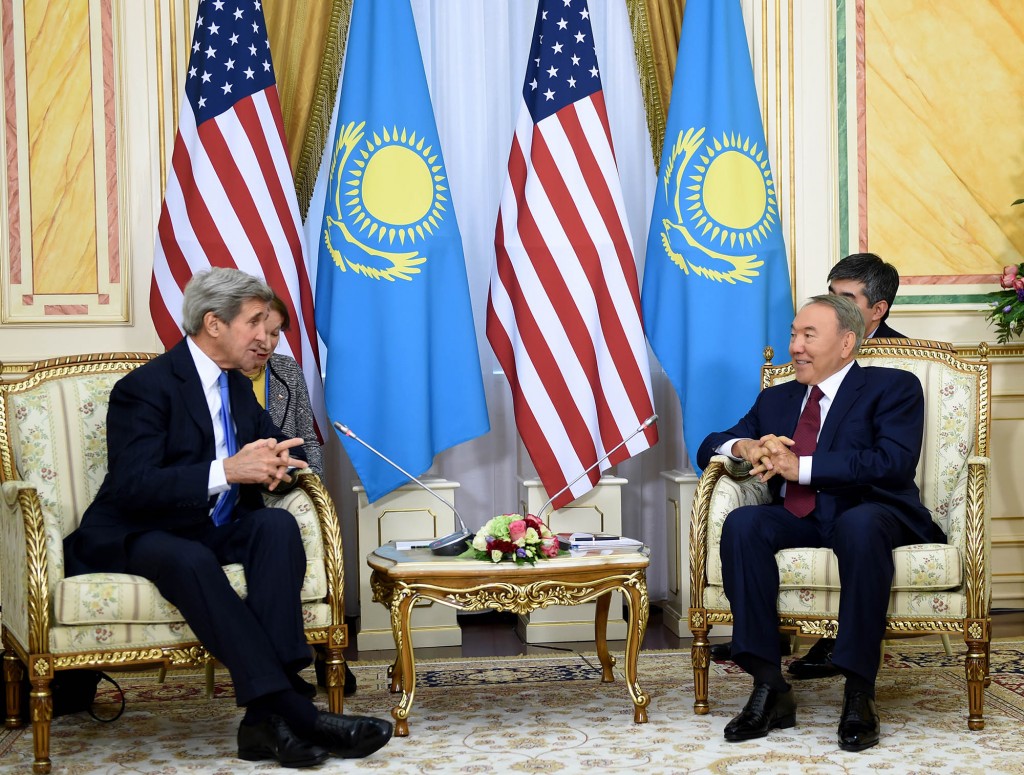 The symbolism also included the fact that U.S. Secretary of State John Kerry visited Astana to reconfirm his country’s commitment to strong ties across the board almost five years to the day after his predecessor, Hillary Clinton, visited Astana with a similar message and to attend the historic Organisation for Security and Cooperation in Europe (OSCE) Summit in December 2010. Clinton herself came exactly five years after her predecessor, Condoleezza Rice, who came on a similar mission in 2005. (As fate would have it, Rice herself came to Astana almost five years after the visit of Colin Powell in 2001.)

While the message of the visiting top U.S. diplomats remains pretty much the same, that of Washington’s desire to strengthen and expand ties beyond security and economy, the substance of the talks changes and reflects the pressing issues of the day, such as countering Daesh, and new global priorities, such as the need for deeper commitments to fight climate change cooperatively.

After warmer Bishkek and Samarkand, Kerry’s first two stops on his whirlwind tour of five Central Asian nations, Astana greeted him on Nov. 2 with its first real snow of the season.

Yet the cold outside was compensated by the very warm reception Kerry received from Kazakh President Nursultan Nazarbayev, Prime Minister Karim Massimov and Foreign Minister Erlan Idrissov and afterward from the several hundred students at Nazarbayev University where he delivered a lecture. Kerry’s visit to Astana followed a meeting of five Central Asian countries and the United States in the new C5+1 format one day earlier in Samarkand, Uzbekistan.

Opening the meeting in the Akorda, Nazarbayev welcomed Kerry to the region and Kazakhstan.

“Recently, I had a meeting with President Barack Obama in New York, where we discussed issues of bilateral cooperation. Since the independence of our country, which will turn 24 in December, we have cooperated with the U.S. Our citizens are thankful for constant support of our sovereignty and economic development. Presently, there are about 500 companies operating in Kazakhstan with the participation of American assets. We are aiming to continue close cooperation,” Nazarbayev said.

Nazarbayev noted that Kazakhstan and the U.S. also cooperate in nuclear disarmament and non-proliferation and Nazarbayev expressed support for Obama’s initiatives in this sphere.

Kerry praised the results of talks between Nazarbayev and Obama in New York, during which the sides discussed non-proliferation of nuclear weapons, combating extremism, the situation in Afghanistan and countering Daesh.

“The U.S. is the largest direct investor in Kazakhstan. I met this morning with the American Chamber of Commerce representatives here. They were very pleased with the progress that is being made. Your prime minister meets with them once a month; you have put in a very ambitious set of reforms – your 100 steps centred around five different areas – and we really want to work with you very closely in trying to implement those reforms as effectively and as rapidly as possible,” Kerry said.

“Yesterday in Samarkand, we had a very constructive and effective meeting with the five countries of Central Asia, talking about ways we can coordinate on specific projects and try to break down some of the barriers that have prevented the region from growing as a region,” he added.

Kerry also had a breakfast meeting with Massimov, during which they discussed Kazakh-American cooperation and international issues.

Later, Kerry met with Idrissov at the Kazakh Ministry of Foreign Affairs for what was already the fourth meeting of the bilateral Strategic Partnership Dialogue (SPD). The parties discussed bilateral, regional and multilateral cooperation, as well as issued a joint statement.

Idrissov and Kerry commended the activities of SPD which has become an important and successful mechanism for strengthening bilateral relations. The sides discussed in detail the enhancement of trade and economic and investment cooperation in light of Kazakhstan’s accession to the World Trade Organisation (WTO) and prospects for partnerships in traditional and alternative energy. They agreed to strengthen cooperation in science, technology and education, as well as to improve the legal framework and facilitation of their visa regimes.

Kerry welcomed invitation for the U.S. to participate in the upcoming international specialised exhibition EXPO 2017. According to the Kazakh foreign ministry, he said he supported the theme of the exhibition, “Future Energy,” as well as praised the initiative of President Nazarbayev to establish a Centre for the Development of Green Technologies under the United Nations on the exhibition premises.

The counterparts also mentioned an agreement, signed in August, to establish an International Atomic Energy Agency Low-Enriched Uranium Bank in Kazakhstan as well as Kazakhstan’s hosting of two rounds of negotiations on Iran’s nuclear programme. The sides also discussed cooperation in the fight against terrorism and violent extremism, shared opinions on regional integration of countries in Central Asia and the situation in Afghanistan and other regional countries.

At the meeting, Idrissov presented Kerry with a vase of famous Kazakh Aport apples as a symbol of fruitful cooperation between the two countries and the great potential to develop it, the Kazakh foreign ministry said, distributing photos of the event.

In his 50-minute lecture and questions and answer session, Kerry outlined Washington’s vision for tackling what he termed three biggest challenges globally and regionally, those of ensuring sustainable economic growth, fighting climate change and facing down the growing spread of radical ideas. Kerry also went out of his way to stress the U.S. commitment to cooperative relations in the region, stressing that they were not about a “zero sum game” and that Washington was keen to work with countries in the region and beyond to see it succeed.

Asked by a student if the U.S. supports Kazakhstan’s candidacy for non-permanent membership on the UN Security Council for 2017–2018, Kerry said the vote, which is to come less than a year from now, will be a secret one and the U.S. always keeps its position secret, yet he went on to outline the general approach.

“We work with the countries, and the countries will know what we’re doing. And we encourage strong candidacies, and Kazakhstan’s candidacy is a strong candidacy… but we have to wait and see sort of how or where that develops. But we’re very encouraging of what Kazakhstan has been doing. It has become a very significant global partner for peacekeeping. It has become a significant partner with its KazAID concept. It’s helping other nations with any number of different things – helped us with Ebola. We’re grateful for that. So those are the kinds of things that make it a strong candidate. And we’ll have to see where we are when the time comes.”

“But if you want to succeed, … open your mind, ask questions, push the limits, … learn critical thinking. Also, don’t get stuck in one niche, … try to spread your wings, … broaden the experience as much as you can, but also, have some fun,” Kerry said.