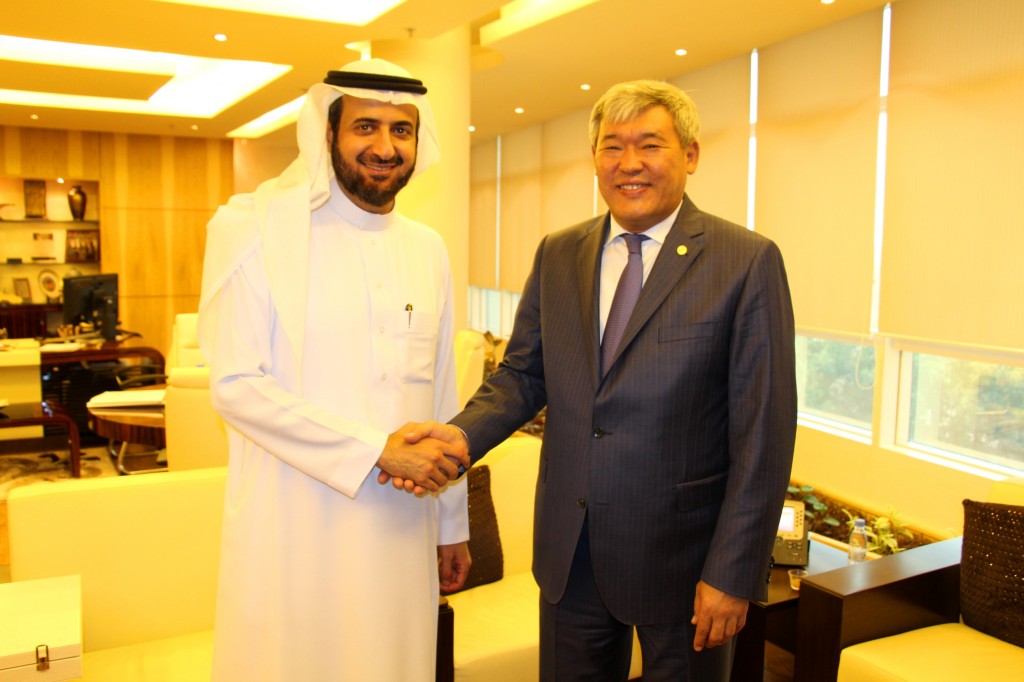 Zhoshybayev met with Jordanian Investment Commission Chairman Montasser Oklah, who is responsible for his country’s participation in the expo, Ministry of Foreign Affairs and Expatriates Secretary General Mohammad Yaseen, Ministry of Energy and Mineral Resources Secretary General Ghaleb Maabreh and Ministry of Tourism and Antiquities Secretary-General Issa Gammo. During the session, Jordan officially confirmed its participation in EXPO 2017 in Astana. The sides discussed organisational issues in detail and initialed a respective agreement.

Zhoshybayev and Yaseen discussed a wide range of issues regarding the development of Kazakh-Jordanian cooperation and interaction between the Foreign Ministries.

“In terms of the development of relations with Kazakhstan, which is the pillar of political stability and prosperity in Central Asia, Jordan promotes a special and trusting relationship established between the leaders of Kazakhstan and Jordan,” said Yaseen.

At the meeting with Maabreh, Zhoshybayev spoke about the exhibition’s theme and Kazakhstan’s development of green energy. In turn, the secretary-general shared information about the construction of the first nuclear power plant in Jordan, which is implemented in the framework of the national programme to develop renewable energy up to 2020. Jordan was also among the first countries in the Middle East to begin promoting the use of green technology.

Gammo emphasised an interest in promoting tourism potential, including creating tour packages and the possibility of opening direct flights between the two capitals.

Two days later, Zhoshybaev met with high-level officials of Saudi Arabia, including Minister of Commerce and Industry Tawfiq Al Rabiah, Deputy Minister of Foreign Affairs Prince Turki bin Saud Al-Kabeer and Vice President of the King Abdullah City for Atomic and Renewable Energy Hussain Abulfaraj. He also met the leadership of the chamber of commerce and industry and executives of tourism companies, business structures and organisations that specialise in alternative and renewable energy. The sides discussed issues of cooperating in energy, attracting investments and participating in the exposition. 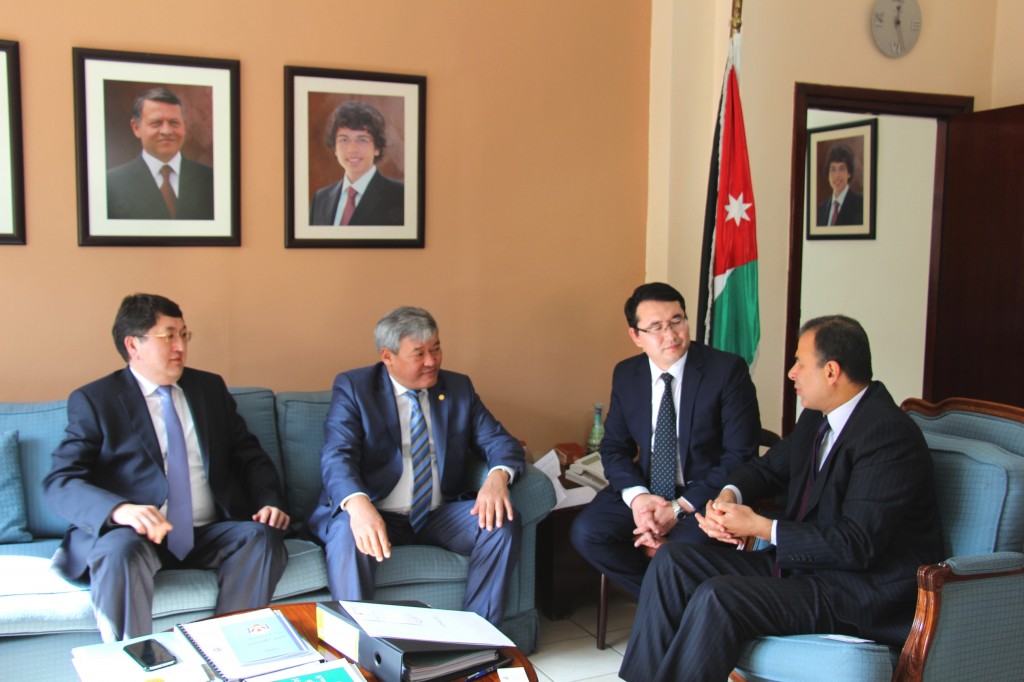 First Deputy Foreign Minister Rapil Zhoshybayev in a meeting in the Ministry of Tourism and Antiquities of Jordan.

“Kazakhstan and Saudi Arabia have established strong relationships that are open and mutually trusted on the whole range of bilateral cooperation,” said Al Rabiah. “Saudi Arabia is going to take part in EXPO 2017. The country’s leadership attaches great importance to the upcoming exhibition and the kingdom has something to show the world community on the subject of future energy.”

The kingdom has made a decision to completely stop using fossil fuels by 2040, incorporating solar energy and wind to replace coal and oil. As a result, $109 billion will be invested in projects to develop solar energy infrastructure.

The prince noted Kazakhstan’s vigorous activity in international organisations, including the Organisation of Islamic Cooperation and United Nations structures. Zhoshybayev expressed his gratitude to the Saudi side for its support of Kazakhstan’s candidacy as a nonpermanent member of the UN Security Council for 2017-2018.

Given Saudi Arabia’s plans to develop alternative energy, the EXPO 2017 commissioner invited the country’s leading enterprises to take part in the exposition. At the end of the event, memorandums on cooperation were signed between Astana EXPO 2017 and the heads of Al Taayar and Vega, leading travel companies in the region.

“Next year, we are planning to introduce a direct flight from Riyadh to Astana to enable people from the kingdom and from Kazakhstan to travel easily and in comfort,” said Zhoshybayev.

In Tehran, Zhoshybayev had productive meetings with the foreign minister and other senior officials on the development of economic cooperation and tourist exchanges, as well as with leading Iranian companies working with alternative and renewable energy sources.

During the meeting with Iranian Foreign Minister Mohammad Javad Zarif, the parties discussed the state and prospects of collaboration between the two countries, bilateral political cooperation and the development of trade-economic, scientific-technical, cultural and humanitarian partnerships between Kazakhstan and Iran.

Tourism development issues, visa regime simplification, the implementation of tourist group visas and the opening of direct flights between the capitals of the two states were emphasised at a meeting with Deputy Head of the Iranian Cultural Heritage, Handicrafts and Tourism Organisation Morteza Rahmani. The parties focused also on implementation of joint projects on tourist group packages and popularisation of Kazakhstan’s tourism potential in Iran. Rahmani said Iran has included Kazakhstan in its list of priority countries in the field of tourism.

At the Ministry of Industry and Mines, the sides discussed bilateral trade-economic relations and prospects of cooperation in green energy.

According to its national development plan, Iran intends to produce up to 5 gigawatts of electric power with the use of renewable energy sources. The Iranian government has allocated 500 million euros for this sector from the National Development Fund of Iran. 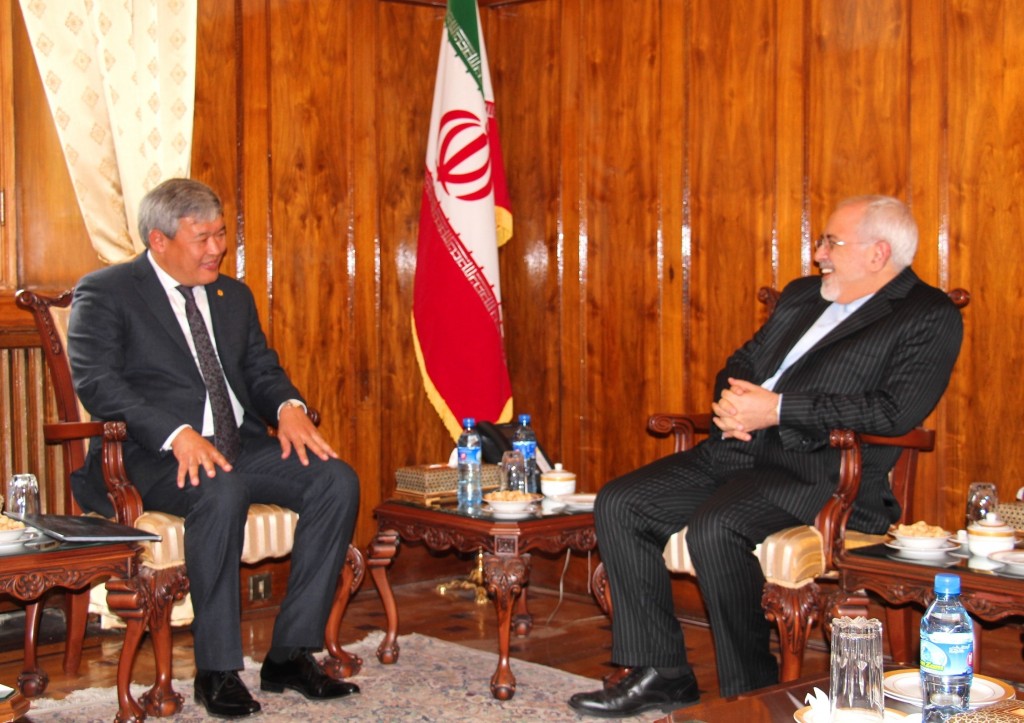 The parties also highlighted that the launch of Kazakhstan-Turkmenistan-Iran railroad in December 2014 broadens opportunities for the development and expansion of bilateral and regional trade.

Deputy Minister Hussein Esfahbod, who was recently appointed Iran’s section commissioner at EXPO 2017, assured that Iran would be worthily represented at the exhibition in Astana. Toward this end, Zhoshybayev and Esfahbod signed a formal agreement on Iran’s participation in the event. Cooperation agreements in tourism were also signed between Astana EXPO 2017 National Company and Iran’s Teeba and Holiday Co. tour operators.

Elsewhere, the United Kingdom also signed an agreement Nov. 4 to participate in EXPO 2017. The document was finalised during the second session of the Kazakh-British Intergovernmental Commission for Trade and Economic Cooperation attended by Kazakh President Nursultan Nazarbayev and British Prime Minister David Cameron, reported the Akorda press service.

Akhmetzhan Yessimov, chair of EXPO 2017, and Charles Hendry, commissioner of the expo’s British section, inked the agreement. According to the document, the British pavilion is expected to be one of the largest buildings, measuring 1,022 square metres. The agreement on France’s participation was signed at the Elysee Palace during the expanded meeting between Nazarbayev and French President François Hollande on Nov. 5. The Ministry of Ecology, Sustainable Development and Energy will be the responsible authority for organising France’s involvement. The nation’s pavilion will cover an area of about 1,083 square metres.

More than 100 countries are expected to take part in EXPO 2017, 51 of which have already confirmed their involvement, as well as 11 international organisations such as the United Nations Educational, Scientific and Cultural Organisation (UNESCO), the Organisation for Economic Co-operation and Development (OECD) and numerous other international groups.