By Malika Orazgaliyeva in International on 19 November 2015

ASTANA – The 42nd regular session of the working group on the Convention of the Legal Status of the Caspian Sea opened at the Kazakh Foreign Ministry in Astana Nov. 18. 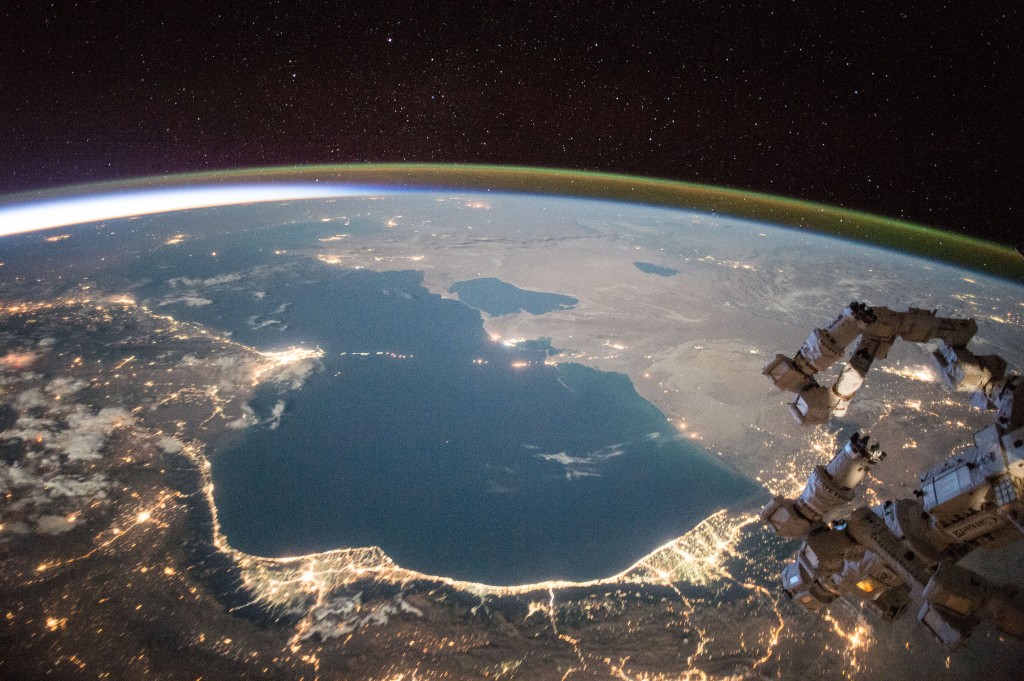 A night view of the Caspian Sea. Photo: Wikimedia commons

The need to prepare and sign the convention was reiterated by President Nursultan Nazarbayev Sept. 29 at the fourth Caspian Summit in Astrakhan, when he suggested it should be adopted at the next such summit in Kazakhstan. According to Minister of Foreign Affairs Erlan Idrissov, who opened the three-day session, such a proposal was in principle supported by all five heads of state.

“The time of completion of the five-sided agreement on the draft convention depends largely on the efficiency and coherence of the expert work carried out in the framework of the negotiations,” Idrissov said addressing around 50 assembled officials from the five countries.

He stressed that the five presidents, during their meeting in Astrakhan, had adopted a common decision on one of the key elements of the Caspian Sea legal status – the delimitation of marine waters. “In particular, an agreement in principle was achieved in relation to the establishment on the Caspian of a 15-nautical-miles-wide sovereign zone and of a 10-nautical-mile-wide fishing belt,” Idrissov said. “Given that many other issues directly or indirectly are connected with the delimitation and the regime governing marine waters, I am sure this agreement will be a serious factor contributing to reaching agreements on the remaining issues.”

He further noted intergovernmental agreements in the field of hydrometeorology, conservation and sustainable use of biological resources and emergency management in the Caspian Sea were signed in the framework of the fourth summit. The documents provide the legal basis for deeper cooperation in specific sectors among the Caspian states.

“Kazakhstan already fulfilled all internal procedures necessary for the entry into force of the mentioned agreements,” Idrissov announced.

He added that as a host country of the planned fifth Caspian Summit in 2016, the Kazakh side plans to arrange a meeting of the foreign ministers of the five littoral states next year in order to consider the preliminary results of the convention’s draft text.

Azerbaijan, Iran, Kazakhstan, Russia and Turkmenistan have been negotiating the legal status of the inland body of water since the early 1990s, when the issue arose following the collapse of the Soviet Union and the appearance of four new states on its shores. “During the negotiation process, Kazakhstan has since the beginning followed a compromise approach that takes into account the interests of all riparian countries. For this reason, Kazakhstan’s position on the main aspects of the legal status of the Caspian Sea was spread as an official document of the United Nations (UN) in 1997 and to date remains consistent and unchanged,” said Idrissov, explaining Astana’s position.

Kazakhstan’s approach is based on the need to establish the territorial waters, fishing zones and common water space in the Caspian Sea in accordance with the provisions of the 1982 United Nations Convention on the Law of the Sea to ensure the political and economic interests of the littoral countries.

“Concerning delimitation of the Caspian Sea bottom, Kazakhstan adheres to the position that it should be divided among the littoral states on the areas within which they have the sovereign right to conduct exploration and development of the natural resources of the Caspian shelf,” said Idrissov.

He suggested it would be advantageous to carry out delimitation of the Caspian Sea in accordance with existing international methods and practices based on the agreement of neighbouring states, taking into account generally-recognised norms of international law.

“Currently, Kazakhstan has concluded appropriate bilateral agreements with Russia, Azerbaijan and Turkmenistan which ensure the international legal framework for development of oil and gas reserves in the northeastern part of the Caspian Sea, thus creating an attractive and stable investment climate,” said the Kazakh minister.
The settlements indicate delimitation of the Kazakh sector of the sea bottom is almost complete, he said.

Regarding the order of navigation, Idrissov suggested the position which fully corresponds to the decisions of the fourth summit. Thus, Kazakhstan recommended establishing a uniform regime in the national sovereignty area in accordance with the basic provisions of the law of the sea for all kinds of vessels, except warships. The authorisation procedure needs to be applied to warships to pass through the territorial waters.

In marine areas beyond the territorial waters, Kazakhstan proposed establishing freedom of navigation, based on the condition that vessels respect sovereign and exclusive rights of riparian states for the use of mineral resources and biological resources fishery.

The laying of pipelines and transit is extremely important to the interests of each state, said Idrissov, because it directly affects the degree of economic development, as well as international trade and economic relations in particular.

“It is necessary to come out with a compromise and creative solutions in the near future. In this regard, Kazakhstan supports an opinion that the text of the convention should include the rights of the inland Caspian states on freedom of transit by all means of transport, including pipelines, as well as their access to other seas and oceans enshrined in a number of universal international treaties,” he added.

Ending his speech, Idrissov stressed only combined efforts will help to succeed in concluding the convention on the legal status of the Caspian Sea.

The session will last until Nov. 20 and is expected to result in the adoption of a communiqué.