BERLIN – The Westerwelle Foundation and the Kazakh Embassy in Germany held a conference at the foundation in Berlin Nov. 23, where Kazakhstan’s nuclear disarmament initiatives and others from around the world were discussed. Speakers and panellists devoted particular attention to countering the threat of nuclear weapons falling into terrorist hands, finding ways to bring forward the entry into force of the Comprehensive Nuclear Test Ban Treaty (CTBT) and generally advancing a vision of a nuclear weapon free world. 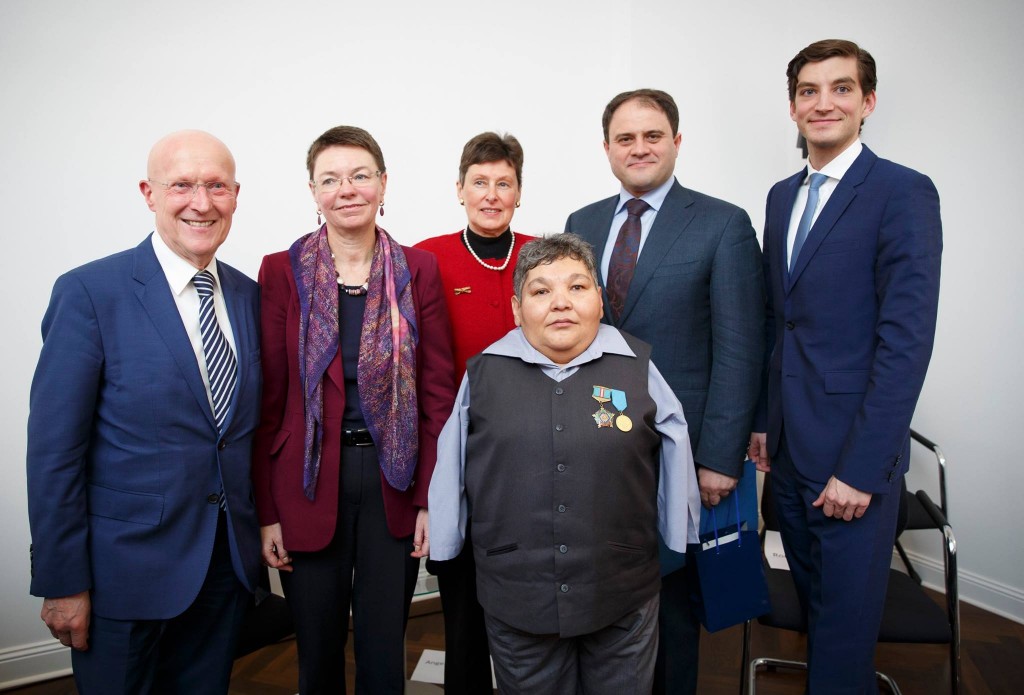 Welcoming attendees to the elegant premises of the foundation, its director Alexander Vogel read a message from its founder, former German Vice Chancellor and Foreign Minister Guido Westerwelle, who is known as one of the strongest proponents of global nuclear disarmament. In his message, Westerwelle stressed the importance of continued global focus on this issue, which is becoming more and more urgent, he said.

In his remarks, Kazakh Ambassador to Germany Bolat Nussupov paid special attention to the decision of President Nursultan Nazarbayev to shut down the Semipalatinsk Nuclear Test Site and, shortly after the country’s independence, to reject the fourth largest nuclear arsenal in the world, which Kazakhstan had inherited from the USSR. He called the decision momentous for international policy, particularly today, with the threat of terrorism and the fear of weapons falling into terrorist hands being major international concerns. He also noted the adverse impact of almost 500 Soviet nuclear weapon tests at Semipalatinsk on people and the environment.

“As I stand here before you, I am full of sympathy for the recent victims of terrorism and their families from Russia, Lebanon, Paris and most recently Mali,” said Honorary Ambassador of The ATOM Project Karipbek Kuyukov, speaking through an interpreter. “As I see the expansion of the likes of the so-called Islamic State and Al-Qaeda fundamentalists spreading their carnage around the world, I am also increasingly concerned about the serious threat of nuclear weapons material falling into the hands of terrorists. I cannot stand by without alerting you all about this danger, which, as far as we know, has to date been impeded by security forces in various parts of the world.” 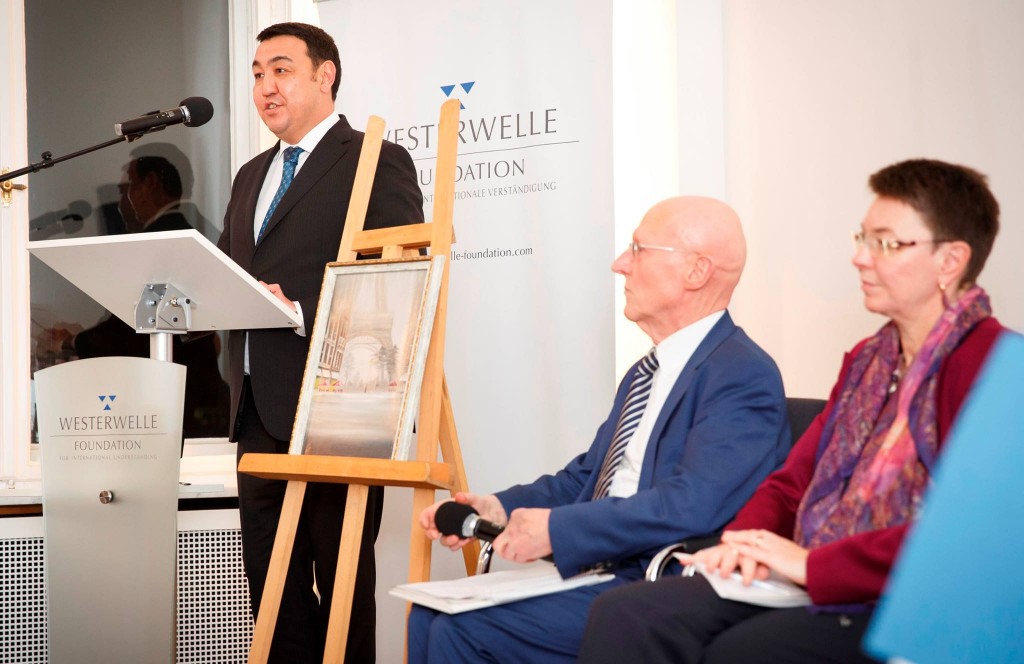 “Nuclear weapons are an evil and misguided way of purportedly providing security,” Kuyukov said. “Their very existence poses a serious threat from either an accident waiting to happen or a terrorist event with their use. Our world now has a new urgency posed by Islamic fundamentalist terrorists, who will stop at nothing to kill as many people as they can. The mere fact that we have so many nuclear weapons, which are sometimes less well secured in parts of the world, makes this call more urgent. Let us tell our world leaders to begin serious negotiations on finally eradicating all nuclear weapons worldwide responsibly and urgently, starting with the immediate signing of the CTBT,” he added.

“This new type of terror war demands our attention, ensuring the safe decommission and disposal of all nuclear weapons for the sake of mankind,” he said.

“My parents were live witnesses to the nuclear testing conducted at the Soviet Union’s Semipalatinsk nuclear test site over more than 40 years. They watched as the mushroom clouds formed in the air and the soil flew up into the stratosphere. I have seen many children born with deformations. My own parents had two children who didn’t live to be one year old. I want to ask you, dear delegates, how can you allow for these weapons to exist?”

Kuyukov called on participants to sign The ATOM Project’s online petition, which now has more than 210,000 signatures from more than 100 countries, to finally put an end to nuclear weapons development, saying, “The Cold War has ended but a new era spurred by Islamist terrorism makes this call ever more urgent. Let us not give these terrorists the chance to acquire any nuclear weapons grade material to sow their carnage.”

“I am a victim of the nuclear testing at Semipalatinsk. I was born without arms, but I manage to express my creativity through painting with my mouth and feet. I have devoted my life and art to making sure that no one – and nowhere – else suffers the devastating effects of nuclear weapons. I have travelled throughout the world on behalf of The ATOM Project and I have spoken out against nuclear weapons, calling on everyone to sign a petition to world leaders to ban them for good. I represent some 1.5 million fellow Kazakhs and the millions of other victims from Algeria, Polynesian Islands, Japan, et cetera. Speaking on behalf of all victims of nuclear testing, I want my generation to be the last generation to bear the effects of this monstrous evil,” Kuyukov concluded.

“Kazakhstan, better perhaps than many other countries, knows the horrible consequences of nuclear weapons,” said Chairman of the International Information Committee of the Kazakh Ministry of Foreign Affairs Roman Vassilenko, who was the keynote speaker at the event from Kazakhstan, as he, too, referred to the tragic history of nuclear testing in his country. “At the UN General Assembly in September, our President proposed that mankind identify nuclear disarmament as the ultimate goal for the 21st century and building a nuclear weapon free world as the ultimate law of humanity. He offered a vision of a nuclear weapon free world by 2045, which is the year of the centenary of the United Nations and of the first ever use of the nuclear weapons.”

He said Kazakhstan is receiving growing international support for its nuclear disarmament initiatives, as seen in the unanimously adopted resolution of the UN General Assembly on declaring Aug. 29 the International Day against Nuclear Tests. Vassilenko emphasised that Kazakhstan proved by its own example the possibility and success of ensuring national security without nuclear weapons, rather than by possessing them. He also stressed that the initiatives proposed by Nazarbayev during the recent UN General Assembly, including his call to adopt a Universal Declaration on Achieving a Nuclear Weapons Free World, are being embraced by the international community, showing both their necessity and a growing understanding of the need to take more concrete steps toward a world free from nuclear weapons.

“The initiatives of Kazakhstan and President Nazarbayev to shut down the Semipalatinsk Nuclear Test Site and reject nuclear weapons are invaluable,” said Federal Government Commissioner for Disarmament and Arms Control Ambassador Patricia Flor, emphasising the importance of multilateral efforts in global nuclear disarmament. “Germany is completely in solidarity with Kazakhstan in this matter. We have a goal – to make this world free from nuclear weapons. It is difficult to say when we will achieve the goal, but we can’t forget about the consequences of Hiroshima and Nagasaki [or the] Semipalatinsk Nuclear Test Site. We must do everything to prevent such tragedies from happening again.”

Presentations of the attendees and opening remarks were given by the moderator of the event, expert on Central Asia and Deutsche Welle journalist Gunter Knabe. Questions about Germany’s policy on American nuclear weapons still based in Germany, the current status of nuclear weapon disarmament globally, the efforts to upgrade nuclear weapons by some countries and environmental problems resulting from nuclear weapons storage, testing or use were answered by experts and hotly debated.

The Westerwelle Foundation seeks to promote international understanding and foster values of democracy, market economy, rule of law and tolerance.