By Kamila Zhumabayeva in Business on 16 November 2015 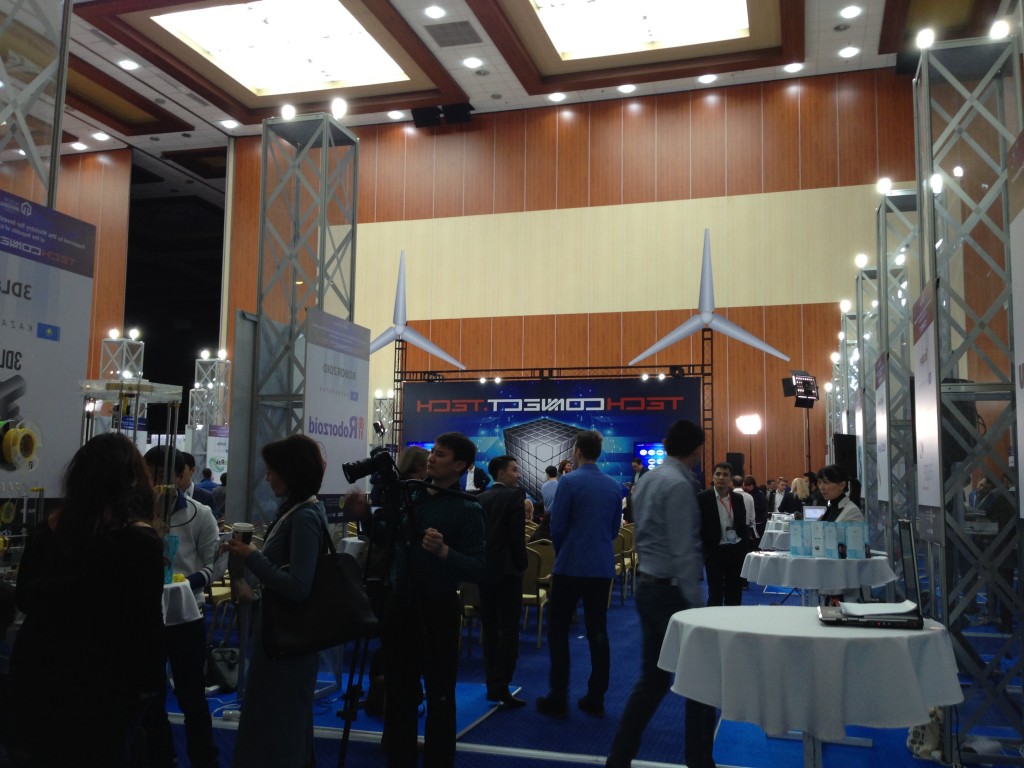 Domestic and international innovative developments are presented at a research exhibition organised as a part of TechConnect Astana, held Nov. 12 at capital’s Palace of Independence.

“This forum is a platform to deepen cooperation, as well as a unique opportunity to attract the leading players of the technological business community and a new impulse to develop innovation in the country. I am sure that hosting this event will allow Kazakhstan to position itself as a key technology hub of the former Soviet Union,” said Nazarbayev in his address, according to Bnews.kz.

The startup battle and research exhibitions were held as a part of the large-scale conference attended by over 2,000 participants, including the founders of 150 local and international startups, 45 speakers, investors and representatives of venture funds. The ASTEX 2015 conference, held within the TechConnect forum, gathered significant data experts from major international organisations and research institutes like EMC, Microsoft, SAP, national IT companies and state representatives, according to the TechConnect Astana press release.

The Wipon Kazakh startup project, one of 10 finalists from five countries in the startup battle, won the main prize of the conference – $25,000 – provided by Cross Border Angels, an international investment network, a press release reported.

“We were attracting small and medium businesses that are located in Almaty, where about 4,000 IT companies are located. By consolidating the entire mass, we want to create a new stream of projects that meets the requirements of competitiveness and is capable of working both in Kazakhstan and beyond the country,” said Kettebekov.

“In order to ensure the critical mass of the companies that will grow at the cost of those centres, we are starting the Startup Kazakhstan programme, which is about attracting startups from Kazakhstan and foreign countries to these technology centres. Jointly, we hope it creates a wave of new companies,” said Kettebekov.

The end result should lead to establishing 50 competitive new companies.

“Almaty Tech Garden is a brand of the Autonomous Cluster Fund of the Park of Innovation Technologies. If before we relied on the organic growth of these companies, then today we say to accelerate the development and the fulfilment of goals which we have set, two or three new directions that are capable to make significant contributions to the country’s GDP should be created. In this regard now, we realised that we need to cultivate startups, meaning to create the environment where the growth of these companies is stimulated,” he stressed.

He emphasised that the strategy on establishing new opportunities for startup companies to go out in new markets is currently being built, as well as the level of competence itself. For example, in order to work with IBM companies, startups must be at the right level.

“Having studied global experience, we chose our own path, which will be constantly changing. This is dynamics and system. We have identified five directions that we see a demand for in the near future, such as new materials and information technologies that are based on fundamental industries. This is our starting point,” Kettebekov noted. “Unlike many other countries where developed markets exist, our approach differs seriously because we attempt to stimulate demand for innovations, which are changing the mentality of companies and an operating procedure.”

Demand was always there; the task is to merely consolidate it, said the CEO.

“A city is a good demand. A startup that provides technologies for a smart city is already a specific demand. Of course, these startups are required to produce high quality products, in order for city residents to entrust their lives to them, in some cases,” he added. “For a startup, networking and meeting other startup companies is important. Most often one startup company cannot offer a resolution to a big problem, but together in a group they can offer and resolve quite big problems.” Forums can be platforms for testing demand and trial and error explorations, he said.

“There is nothing better than to pitch an investor; that is, as a startup you understand what is in demand and how to sell yourself correctly. Forming an understanding of a market is the goal of this event,” said Kettebekov. “There is a good mix of ages and competence; for example, there are 70-year-olds and first- and second year-students in Almaty and this is a big and a little amorphous mass … The only thing, if we compare it to Silicon Valley, where people have work experiences from big corporations, we unfortunately don’t have [those] here.”

He concluded by saying this difference has to be complemented and compensated by the institute of development, where startups and already-existing incubation companies play their roles.