By Ilyas Omarov in Culture on 5 October 2015

ASTANA – The “World of Turkmen Painters” exhibition of works of fine art opened in the National Museum of Kazakhstan on the occasion of the 20th anniversary of Turkmenistan’s declaration of its status as a neutral state. It is arranged as part of the museum project World Heritage and Contemporary Painting. 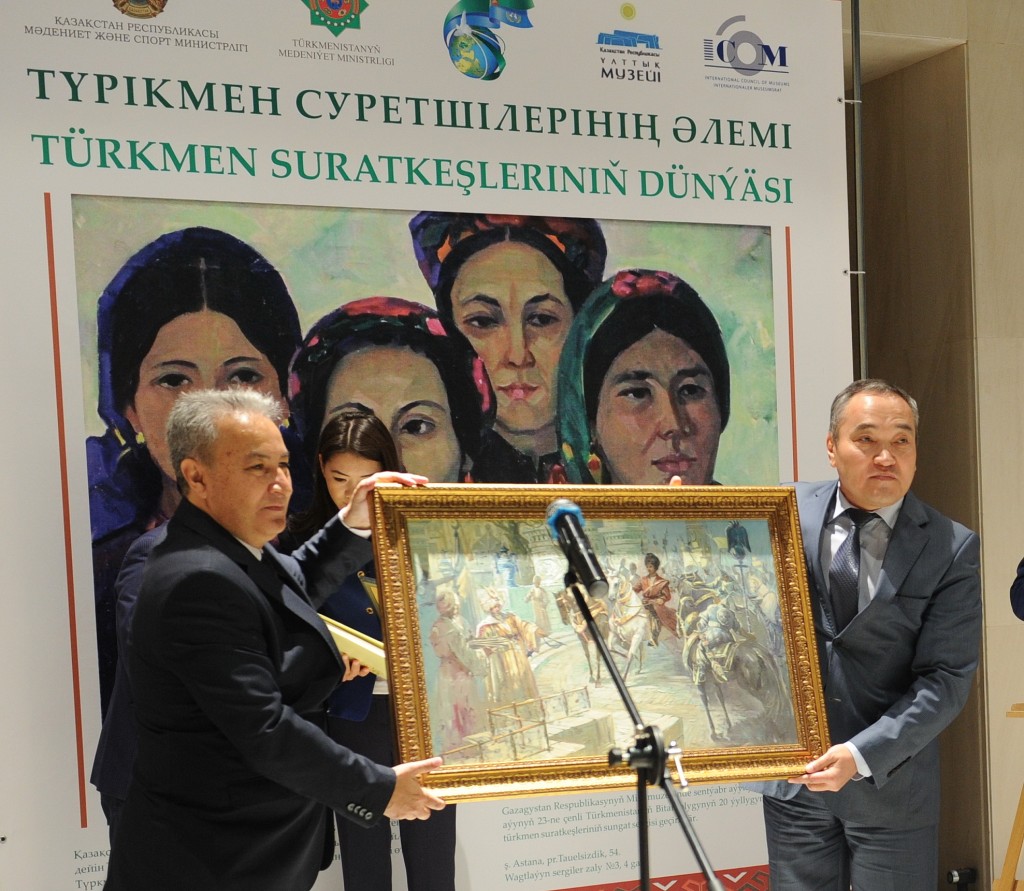 Ambassador of Turkmenistan to Kazakhstan Magtymguly Akmyradov (L) presents a painting at the exhibition of Turkmen art at the National Museum of Kazakhstan.

“We should be proud of the successes of each other, and today’s exhibition is an expression of what Turkmen artists have accomplished in the period of their country’s independence,” said Director of the National Museum Darkhan Mynbai while opening the exhibition.

According to Mynbai, Ambassador of Turkmenistan to Kazakhstan Magtymguly Akmyradov initiated the exhibition. In turn, the Turkmen diplomat expressed his gratitude to the organisers of the exhibition, noting that it was “thanks to the support of the National Museum of Kazakhstan and the Ministry of Culture and Sport of Kazakhstan that this exhibition took place.” In gratitude, he presented to the National Museum a painting by prominent Turkmen artist Azat Muradov titled “The Covenants of Oguz Khan.” Oguz Khan is a legendary figure known from the epics of a number of Turkophone peoples and is considered in Turkmenistan to be a forefather of the Turkmen people.

More than 45 paintings and works of decorative-applied art of Turkmen artists are being presented аt the exhibition. The exhibition includes the works of masters of the older generation as well as new generation artists whose work has emerged during the years of independence.

Turkmenistan’s artistic life has undergone fundamental changes since independence. In 1994, Turkmenistan’s State Academy of Arts was founded, which opened the way for a new generation of talented painters, sculptors, designers and architects. Implementation of the creative potential of young masters of fine art was directly linked with the progressive trends taking place in the country. In the past two decades, artists have become increasingly involved in many international projects, demonstrating the special symbolic language of Turkmen fine arts.

In the 1990s, Turkmen artists went through a period of searching for new spiritual reference points. There is a tendency to pay more attention to the display of philosophical doctrines of mediaeval Turkmen thinkers and the interconnection between spiritual values of the ancient and modern world.