By Altair Nurbekov in Business on 22 October 2015

KHORGOS, ALMATY REGION – Some might say this barren spot on the border between China and Kazakhstan is in the middle of nowhere. And they would be forgiven, for there were only a handful of people and cars spotted along the 300-km, five-hour train ride from Almaty to the nearby Altynkol station (that is, once you get out of the heavily-populated 40-50 km radius around Almaty beyond Zhetygen). 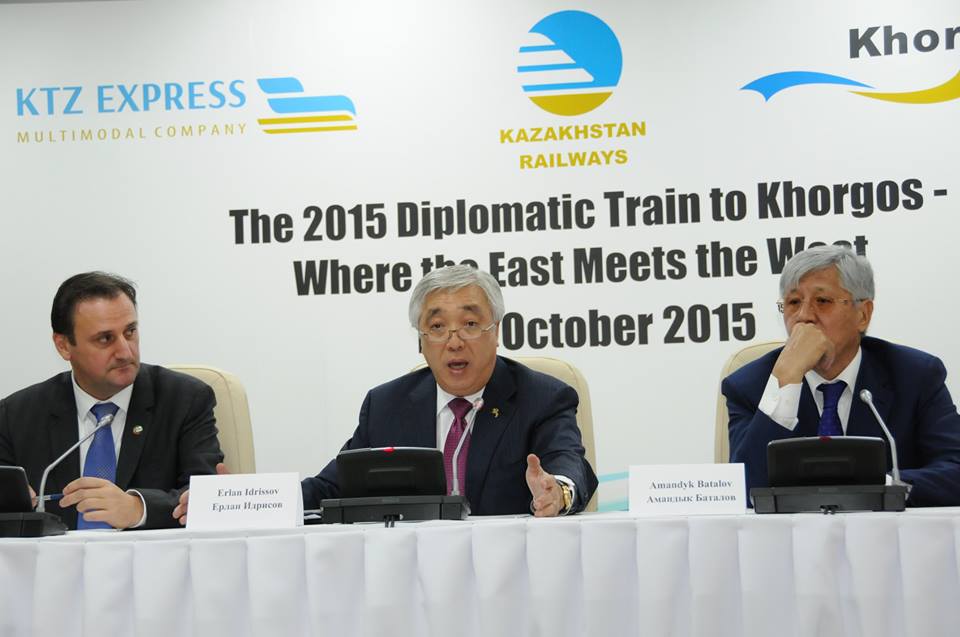 Others, like Belgian-born Karl Gheysen, Director General of KTZE–Khorgos Gateway, the company charged with developing the place into a modern transport and logistics hub, call it “the new Dubai.”

It is the term Gheysen, who comes from Dubai Port World, the world’s third-largest container handler hired by Kazakhstan Temir Zholy (KTZ) national railway company to help it develop the hub, used again and again during the Oct. 19 presentation arranged on the spot for visiting foreign ambassadors and reporters.

“The story of Khorgos today is the story of Dubai some twenty years ago: back then, it was a small fishing port which then grew into what it is today because of the development of the shipping industry,” Gheysen told the visitors. “This is what is already happening here at Khorgos.”

Speaking to a packed hall of approximately 50 ambassadors and senior diplomats from Russia, Poland, Germany, Spain, Latvia, Lithuania, Estonia, Hungary, Georgia, Iran, Saudi Arabia, South Africa and other nations, as well as about 50 foreign and local reporters, Gheysen brought up a simple real-life example to show how shipping across Eurasia, not around it, is fast becoming much quicker and more profitable.

According to Gheysen, a Japanese car manufacturer producing cars in Japan chose to import cars into Kazakhstan. To ship them, the manufacturer loaded them on a ship in Japan which then sailed all the way under India, through the Suez Canal, through the Mediterranean, through Gibraltar, around Western Europe, past England and into the North Sea followed by the Baltic Sea. Once in Finland, the cars were taken ashore, loaded onto trains and shipped to Moscow. There they were handled, checked through customs, etc., before being loaded onto trains to be shipped to Kazakhstan. He declined to give numbers as to how much such a lengthy trip costs in terms of money and time, but he was keen to stress that shipping the cargo across China into Kazakhstan directly by train would take only five days and surely be more cost effective. 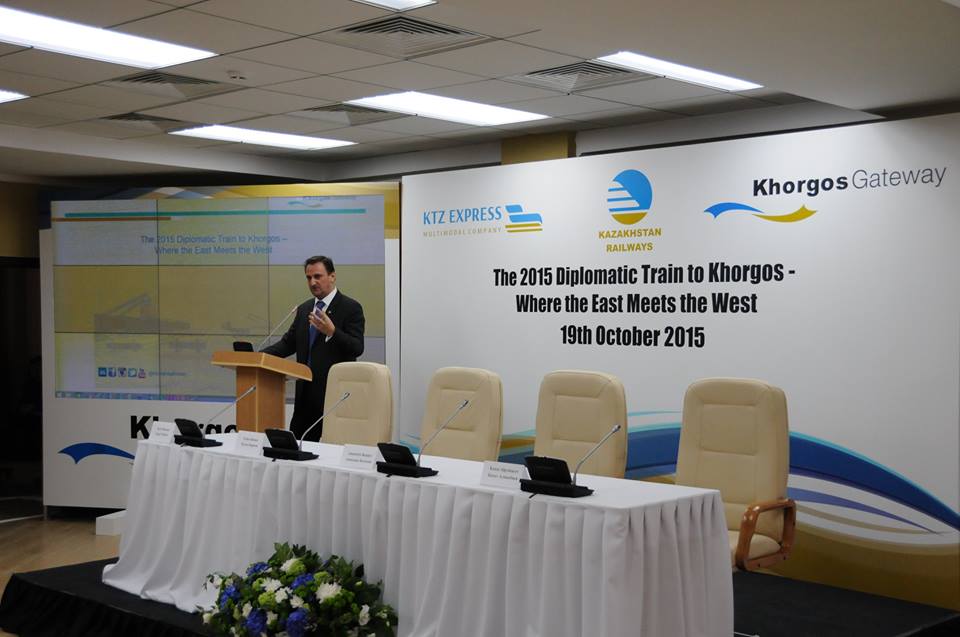 It is exactly this kind of container traffic that the Kazakh officials and managers at KTZ are aiming to attract with the development of the city as the critical milestone along the newly-revived Great Silk Road. Their feelings are mirrored by the Chinese, as all the developments are being done through the agreements between the two countries.

Both Astana and Beijing view the city as a key transit hub for handling cargo between China and Europe under China’s New Silk Road strategy, which aims to rebuild trade links across Eurasia. It fits perfectly well with Kazakhstan’s own Nurly Zhol infrastructure development programme announced a year ago by President Nursultan Nazarbayev. Kazakhstan’s accession to the World Trade Organisation, which is set to be effective this year, and its membership in the Eurasian Economic Union with its focus on the freedom of movement of goods and services, also bode well for the plans to develop Khorgos into a major hub in the heart of Eurasia.

Linking together the newly built Zhetygen–Khorgos railway line, the Western Europe-Western China road corridor and the Aktau port on the Caspian Sea, Khorgos–Eastern Gate special economic zone (SEZ) is seen as an important centre for the consolidation and distribution of cargo flows along the New Silk Road and is expected to further Kazakhstan’s integration into the world transport and trade system.

KTZ took control of the development of Khorgos in mid-2011. Since then, numerous international agreements have been signed to develop the place and its various facilities. As explained on Oct. 19 by KTZ Vice President Kanat Alpysbayev, the Kazakh government and the railroad invested in the range of $500 million to develop the Khorgos-related infrastructure, including for the construction of the Zhetygen-Khorgos rail line commissioned in 2011-2012. 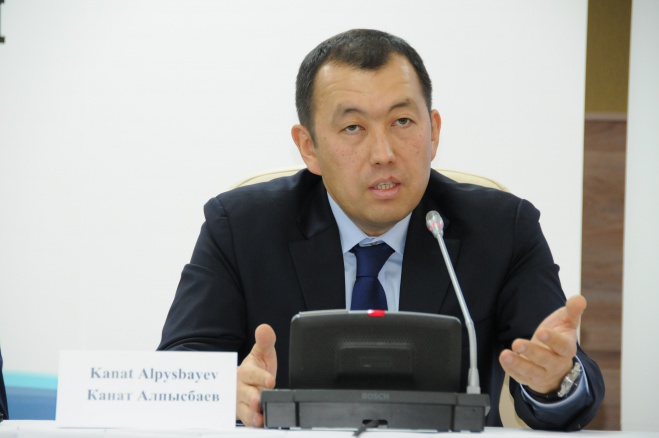 Speaking of the current and future of the so-called Dry Port KTZE–Khorgos Gateway which is being developed inside the sprawling Khorgos–Eastern Gate SEZ, Gheysen said the new facility, using modern logistics technology under international standards, will be an effective solution for transportation of export and import goods. As he took the diplomats and reporters on a tour of the Dry Port, Gheysen also explained that the port can now handle one train, meaning reloading containers from the Chinese narrow gauge rails onto the Kazakh wide gauge rails or vice versa, in 47 minutes. Yet the facility now only handles two to three trains a day, as all the operational procedures, including safety ones, are still being tested and streamlined.

Gheysen said the loading facilities at the Dry Port, the first of its kind in Kazakhstan, offer an effective and economical option for transporting goods through the New Silk Road. Agreements have already been signed with companies such as Hewlett Packard (HP), Toyota, FESCO, DBSchenker and Bravis to compose container trains that will go through the Altynkol station and be handled by the Khorgos–Eastern Gate SEZ. Overall, Gheysen said around 25 companies “from all over Europe” have already signed agreements or memoranda of understanding with the zone’s developers willing to use this new route for delivery of their goods.

The same day, Sanzhar Elubayev, President of KTZExpress, a KTZ subsidiary, spoke at the presentation of the Khorgos International Cross-Border Cooperation Centre (ICBCC).

The ICBCC project opens up additional opportunities for expansion of international trade and the development of the tourism industry with the formation of the territory of the visa-free regime, attracting business community, tourists from near and far abroad, he said. At present, citizens of both countries can visit Khorgos ICBCC visa-free for up to 30 days at a time and there are no limits on the number of such visits. They can buy at ICBBC and duty-free import 1,500 euros (US$ 1703.10) worth of goods weighing less than 50 kilogrammes to their own country.

The centre represents two adjoining, separate slots of land covering 560 hectares, including 217 hectares on the Kazakhstan side of the border that are connected by a special transport and pedestrian crossing. It is here that the modern city infrastructure is being built and the Chinese have already progressed further in the development of their part.

Under this programme, five investment projects to build export and import trade operations have been launched and 10 more projects are under consideration, said Elubayev in his presentation. The total volume of investment projects in the first phase is $300 million, he explained, and potential investors are welcome. 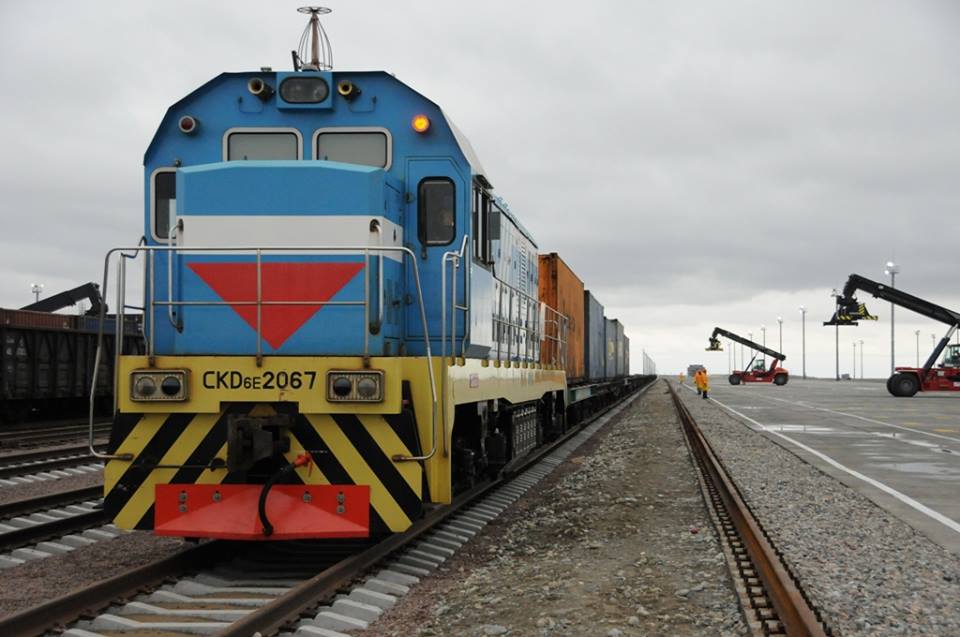 Additionally, China’s Jiangsu province signed an agreement with KTZ last month to invest $600 million over the next five years in the Khorgos-Eastern Gate SEZ. As reported elsewhere, Darryl Hadaway, chief executive of Silk Route Rail, a start-up company focusing on the train business in Kazakhstan, said more and more mega brands such as DHL and HP are opting for the China-Europe rail network, which transits through the city.

With Russia seeking to benefit from its even-larger transit potential for shipping goods from the Far East to Europe and back, there were numerous questions at the presentations from both the Russian Ambassador to Kazakhstan, Mikhail Bocharnikov, and Russian and Western reporters as to how to handle the inevitable competition to make sure the interests of all countries are taken into account.

The answer, given by Foreign Minister Erlan Idrissov and Alpysbayev, in a nutshell, is this: if the 17-time growth in container traffic between China and Europe in the last five years is any indication, there is going to be enough traffic for all to benefit.

KTZ expects traffic volume between the Far East and Europe to reach around 170 million tonnes by 2020, said Alpysbayev. He explained that the plan is to position the city to capture around 10 percent of trade between the Far East and Europe and added that the newly created infrastructure would allow shipping up to 40 million tonnes of cargo annually. 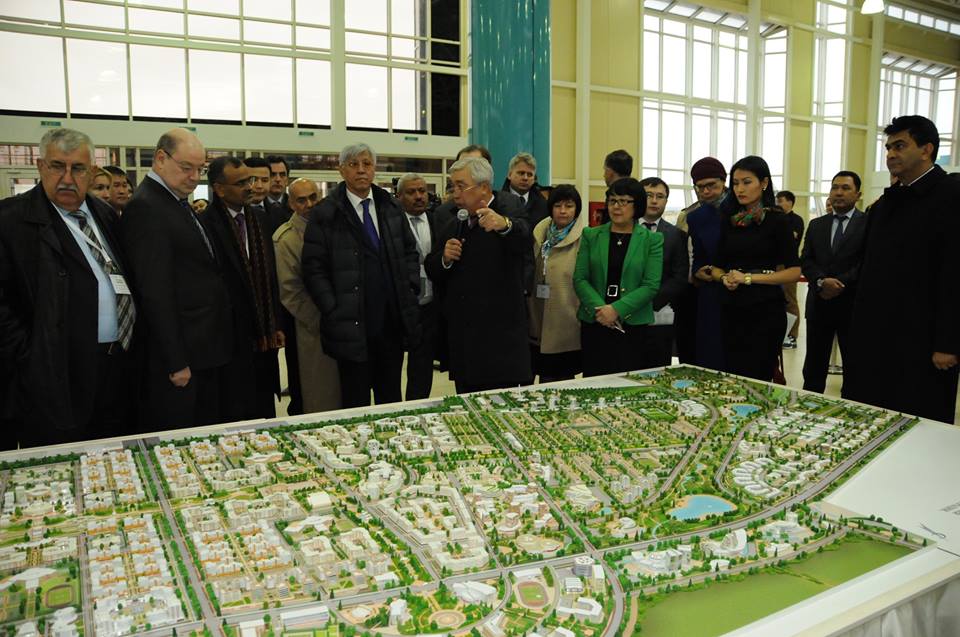 Moreover, he added, the city’s hub seeks to take on handling the traffic that originates in western and southern China or destined thereto, while Russian connections are more suitable for cargoes originating in northern and eastern parts of that country or those that are being shipped there. This means there is no direct competition with the Russian shippers, Alpysbayev said, adding that this issue has been discussed with Russian counterparts on numerous occasions and that the bigger challenge facing all transit countries is how to find enough cargo to go back to China from the West, as now 90 percent of the cargo is sent westward from China.

Idrissov, in turn, used this opportunity to take on the assumptions, espoused by many and highlighted in a recent series in the Financial Times, of the revival of the Great Game of yore for access to Central Asia, this time played out most intensively by China and Russia.

“These comparisons are outdated and have nothing in common with the modern Kazakhstan and our vision of the situation,” he said. “Kazakhstan has been advocating for abandoning the philosophy of the Great Game and embracing the philosophy of the Great Gain for all. The strengthening of Kazakhstan’s role as a bridge between Asia and Europe is in our raw economic interest and initiatives such as the Silk Road Economic Belt will create a wealth of opportunities in the region and beyond. We are convinced that the development of trade and transportation links in the region has enough room to satisfy the interests and benefit all – Russia, China, the West, and, obviously, Kazakhstan.”