By Altair Nurbekov in International on 5 October 2015

NEW YORK – Kazakh President Nursultan Nazarbayev and U.S. President Barack Obama had a bilateral meeting in New York on Sept. 29 to discuss international issues and bilateral trade, investment, energy and security cooperation. The meeting took place on the sidelines of the 70th session of the UN General Assembly. 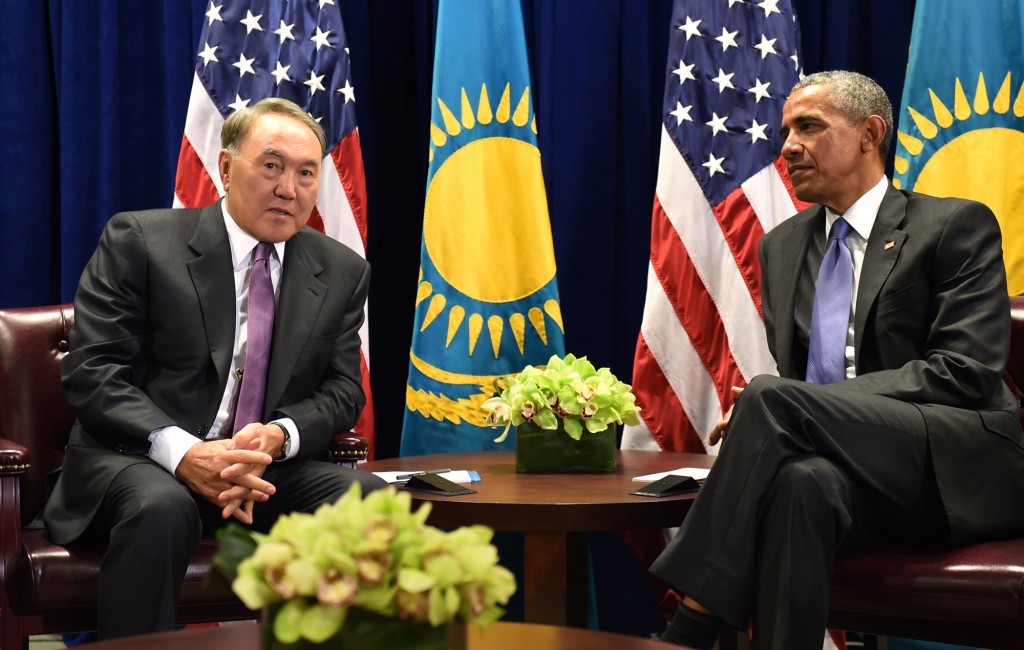 President Nursultan Nazarbayev of Kazakhstan and President Barack Obama of the U.S. meet during the UN General Assembly.

The presidents stressed the importance of the Kazakh-U.S. partnership for development, stability and security in Central Asia.

Nazarbayev recalled that Kazakhstan was the first country to close a nuclear test site as it renounced the nuclear weapons it had inherited as part of the former Soviet Union’s nuclear arsenal.

The leaders further discussed the importance of finding peaceful solutions to the conflict in Ukraine that would be based on full implementation of the Minsk agreements.  The U.S. president also congratulated President Nazarbayev on the launch of the International Atomic Energy Agency’s (IAEA) low-enriched uranium fuel bank in Kazakhstan and on Kazakhstan’s accession to the World Trade Organisation, the White House said in a statement.

“The seven years of dialogue with President Obama were productive. America assisted the accession of our country to the WTO and consistently supports all our initiatives. In Kazakhstan, there are about 500 U.S. companies; the volume of direct investments is about $30 billion. I noted that our country counts on the support of our aspirations and the economic programmes of the United States,” said the Kazakh head of state during a briefing for the media following his meeting with Obama.

Nazarbayev also said during his meeting with Obama that Kazakhstan welcomes a planned visit by U.S. Secretary of State John Kerry in the near term.

The United States, on Dec. 25, 1991, was the first country to recognise Kazakhstan’s independence and to establish diplomatic relations with it following the breakup of the Soviet Union.

In 2010, Kazakhstan and the United States launched the Annual Bilateral Consultations (ABC) under the Strategic Partnership – a framework for cooperation on a range of shared interests, including regional cooperation, the stabilisation of Afghanistan, security, democratic reform, the rule of law, human rights, civil society development, economic development, energy, science and technology and people-to-people contacts. In accordance with the action plan, the parties created working groups that collaborate on these priority issues.