By Michelle Witte in Nation on 5 October 2015

ASTANA – The theme of this year’s Sept. 29 – Oct. 1 Kazenergy Eurasia Forum was “New Horizons of Energy: Prospects of Cooperation and Investments,” but it also acknowledged the new normal: low oil prices and companies trying to balance innovation with thrift in the context of a world increasingly worried about climate change. 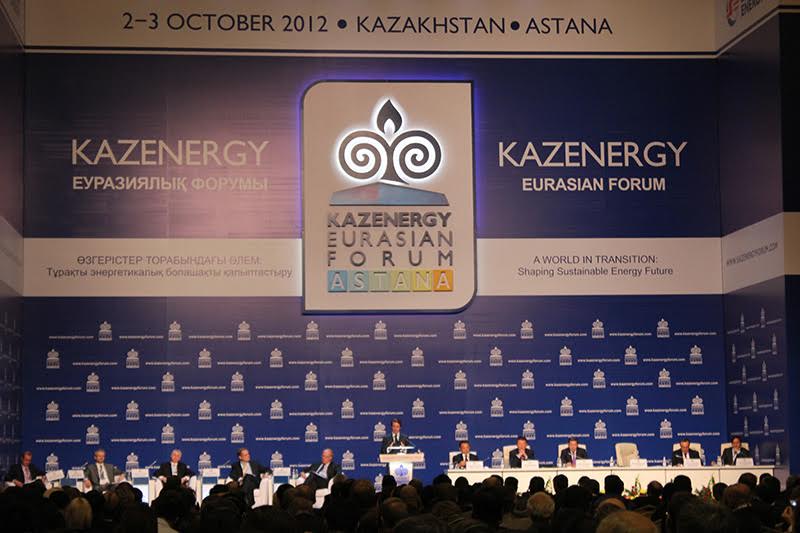 Despite low prices and belt-tightening, the forum offered some good news for the fossil fuel industry. An updated National Energy Report developed by international analytical agency IHS Cambridge Energy Research Associates (IHS CERA) presented on Oct. 1 predicted a return of crude oil prices to $63 per barrel next year and to $80 in 2020 and growth in demand for primary energy resources to 2035 at 1.3 percent per year, 90–115 million barrels per day. Crude oil production in Kazakhstan will increase from 80.8 million tonnes (1.7 million barrels per day) in 2014 to 95.4 million tonnes (2.0 million barrels per day) in 2020, and Europe will remain an important market, the report forecast.

The report was presented by Daniel Yergin, co-founder and chairman of the Cambridge Energy Research Associates, who also moderated discussion panels during the forum.

First Deputy Minister of Energy of Kazakhstan Uzakbai Karabalin said on the first working day of the forum, “We believe in the long-term development of the oil and gas sector in Kazakhstan, as the reserves are far from exhausted.”

However, cost cutting measures were also evident. The day also saw an announcement by KazMunayGas Chairman Sauat Mynbayev during a press conference that the national company had cut its investment portfolio by 130 billion tenge (US$479.5 million) and planned to sell 50 percent of its share, in a $4.7 billion dollar deal, in the massively delayed and over-budget Kashagan project by November. The company also cut its operating costs by117 billion tenge (US$428.6 million) this year.

However, as Vice President of KazMunayGas Daniyar Berlibayev said at a later session on the strategies of national companies in current economic conditions, KazMunayGas is invested largely in long-term projects and is taking a long-term view of investment. They don’t anticipate big changes to major projects and still have as a near-term goal becoming one of the world’s 30 biggest oil companies.

Indeed, reacting to short-term price fluctuations can do more harm than good, some forum participants said. Speaking at another afternoon session, Victor Martynov, rector of the Gubkin Oil and Gas University in Moscow, said “As soon as the crisis comes, companies start cutting money from education and innovation, which means chopping off the branch on which we are sitting.”

The forum’s working days launched on with a plenary session on “The New Normal for Energy Markets,” which focused on China-Kazakhstan energy cooperation, the development of common energy markets in the Eurasian Economic Unions (EAEU), the Eurasian gas market, and energy goals of the Sustainable Development Goals recently adopted at the UN General Assembly.

“The energy issue is the cornerstone of every single economy,” former French Prime Minister Francois Fillon said early in his remarks at the opening session. But the new normal, he explained, will be transition, and consequent choices.

“Governments are anxious to decide energy policy orientation,” he said. This entails choosing the resources to use and the modes of consumption, which will affect future generations, particularly as regards climate change. Energy policy for the 21st century must be reconsidered, and the theme of EXPO 2017 is a “visionary sign” of the need to anticipate the coming energy transformation, he said.

“We must innovate to produce and consume differently,” he said. “The transformation we see everywhere in the world shows the desire of each territory to take control of its own energy. The subject no longer belongs completely to central authorities. Local initiatives are intensifying to achieve energy autonomy on a territorial scale.”

The idea of the state as strategist in energy matters is obsolete, he said. Rather, states should guide the selected policy by defining the main principles and deciding on the choice of technologies to be developed.

Valery Golubev, deputy chairman of the Management Committee of Russia’s Gazprom, discussed the importance of Asia Pacific consumers in gas exports, including expectations that they will more than double their share in the company’s gas exports to 19 percent by 2020 and to 41 percent by 2035.

UN Special Representative and Secretary-General for Sustainable Energy for All Kandeh Yumkella said that energy will be crucial to achieving the goals of the new sustainable development agenda.

“We face three key energy challenges. The first one is to end energy poverty,” he said. “Energy touches on everything about human dignity.”

“Second, we need to strengthen economic growth in ways that are equitable and that satisfy the growing demands of people. … That cannot happen without affordable, reliable energy,” he said.

The third challenge will be to reduce poverty, lift people to a middle-class lifestyle that relies on energy for comfort, without raising the global temperature. For these challenges, the oil and gas sectors have the solution, he said.

The oil and gas sector can help the UN reach three objectives in the next 15 years: to provide universal access to energy, to double the annual rate of energy efficiency, and to double the share of renewable sources in the global energy mix. “The technologies are known. We can do it. What we need is the political will,” he said.

Also taking part in the first plenary session were Administrator of the National Energy Administration of China Nuer Baikeli, Minister for Energy and Infrastructure of the Eurasian Economic Commission Tair Mansurov and President of the World Petroleum Council Jozsef Toth.

During the rest of the day, which included panels on stable resource potential as a foundation for ensuring energy security, changes in European energy dynamics and possible implications for Central Asia, strategies of national companies amidst current environment, breakthroughs for energy sector development, local content development and integration processes as well as on the resolution of investment disputes, participants discussed the new realities of a sector facing low prices.

The plenary session of the second day, “Energy Resources in the Limelight of Geopolitical Relations,” gathered Minister of Energy of Romania Andrei Dominic Gerea, Deputy Minister of Energy of Bulgaria Anton Pavlov, Vice President of Transneft Mikhail Margelov, Senior Vice President for Asia of Argus Media Jim Nicholson and First Vice President for Global Industry and Corporate Analysis of Wood Mackenzie Simon Flowers to discuss the use of energy as a geopolitical tool, the emergence of Asian markets as an alternative to European destinations and other geopolitical implications of the industry.